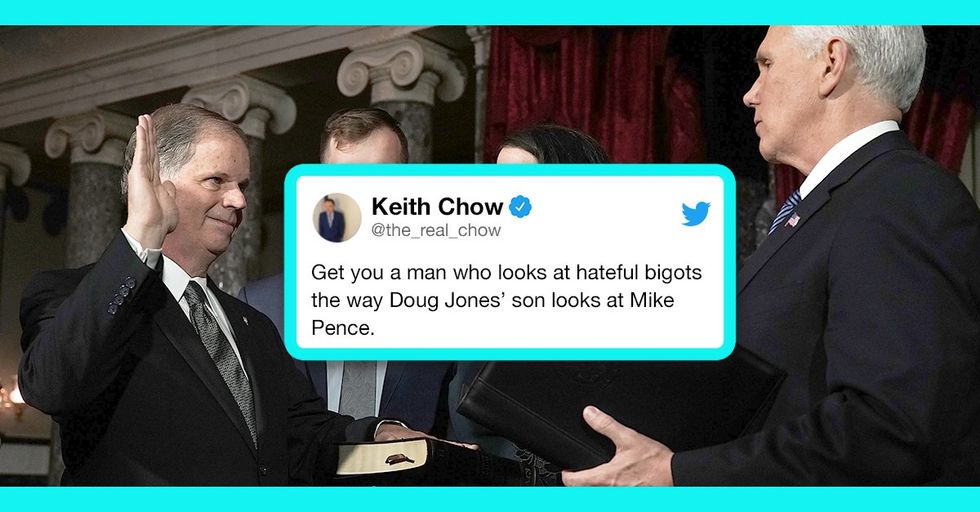 It's only a few days into 2018, and already we have been gifted the greatest photograph of the year, the decade, and possibly even the best photo in the entire history of man.

A photo was snapped during the ceremony, and it instantly became the best photo ever taken for one reason and one reason only. Doug Jones' son is staring a hole right into Mike Pence because Doug Jones' son, Carson, is gay, and Mike Pence is the most powerful hater of gay people in the nation.

First, a refresher. This is Doug Jones.

Doug Jones pulled off a historic victory in December's special election for the Alabama Senate seat when he beat Roy Moore, who was close to winning because he was a Republican and many people in Alabama did not give a flying frick that Roy Moore is a confirmed child molester. But enough did, and so Doug Jones is the first Democrat elected to an Alabama Senate seat in decades. Cool.

You might recognize Mike Pence from his role as the Vice President of the United States and the second worst person in command. Mike Pence is an avowed bigot who's made it his mission to spread his homophobia like a disease. He's been accused of supporting "conversion therapy," an outdated and discredited way to attempt to change someone's sexual orientation. Let's just say that when it comes to gay people, Mike Pence is not a fan.

Mike Pence is living in another decade, an old-fashioned reality, and it's not one that any of us are keen on revisiting. Especially Carson Jones, the son of Doug Jones and an out-and-proud gay man. Carson Jones confirmed he is gay in an interview with The Advocate in December, shortly after his father won the Alabama election. But the truly extraordinary thing about Carson Jones is that he's a zookeeper. That's right. He's an actual real-life zookeeper who takes care of animals. He cannot get any cooler than that. Anyway...

Carson was "thrilled" about his dad's victory and excited to share the swearing-in moment with him. He posted this picture on his Instagram to commemorate the occasion:

Perhaps the most telling hashtag in his caption is "#nocaptionneeded." His obvious glare at Mike Pence is glorious and beautiful and fierce in all the right ways. In fact, let's take a closer look...

Those hot pink laser beams were there the whole time — we simply enhanced the image so you can better see them. Carson Jones staring down Mike Pence until his homophobic soul shrivels up into a tiny, wrinkled ball is the most badass, perfect thing that's happened in 2018 so far (and maybe in our entire lives), and the Internet agrees...

Novelist Derek Milman called this the "photo of the decade," and we completely agree.

Photo of the decade: Doug Jones being sworn in, while his openly gay son QUIETLY DISINTEGRATES THE SOUL OF MIKE PEN… https://t.co/rx1MHR0fVE
— Derek Milman (@Derek Milman)1515032534.0

Next time you see Mike Pence squint, it won't be because he's trying to find his conscience in the vast darkness that it is his soul. It'll be because the intensity of the light from Carson Jones' stare is actually shaving away that soul away slowly and painfully and with great precision.

2018 should be about self-respect and self-care for all of us, so heed these words wisely:

This Twitter user highly identified with Carson Jones and his epic side-eye.

You know what, people? Let's all be Carson Jones in 2018. Make this the year of burning a straight hole through the toxic people in your life (and in your government).

Let's all make this photo our aesthetic in this fresh, new year.

Vote for politicians who see minorities as people. Reject misogynists and homophobes and racists and all other intolerant bigots. Call out the family members who have backward views. Cut out friends who refuse to learn and progress. 2018 is the year the voices of bigots get zapped into nothingness. I can feel it.

As this photo went viral, MSNBC's Kyle Griffin sent out this little reminder:

Republican and child molester Roy Moore is still wallowing and waving his hands in the background while Doug Jones takes his rightful place in the U.S. Senate. That's what I'm talking about. No matter how big a stink bad people like Roy Moore and Mike Pence make in 2018, our voices — and our icy glares — are more powerful, and we will end them.