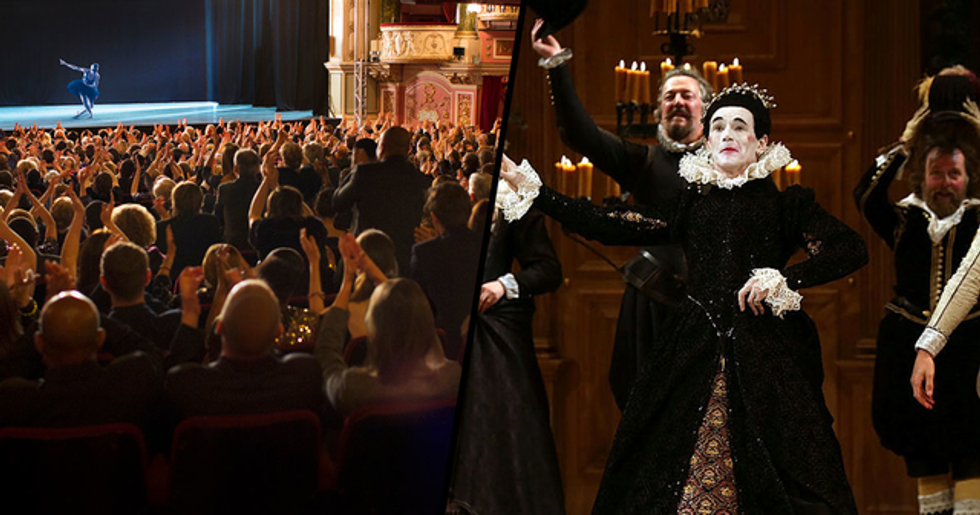 It's 2019, and we live in an era where people get offended by pretty much anything.

From childhood vaccinations to meat-eaters, and all the way to the good old fashioned round of applause, there's a variety of things that our "thin skin" generation finds offense with... But perhaps the most prominent one is gender terms.

Now, back in simpler times, there were simply men and women (including transgender people, of course). Two genders, just how mother nature intended.

But, in more recent times, some people have been claiming that there aren't simply two genders. Some people believe there are, in fact, over a hundred different genders in which a person can identify... Or that some people don't have a gender at all.

It's confusing stuff, I know.

But now, the phrase "ladies and gentlemen" has been deemed as problematic to those who don't identify as either male or female, and has been banned from the theatre as a result. Keep scrolling for the full story...

More and more people are identifying as "non-binary".

Most people, including many transgender people, are either male or female. But some people claim that they don't quite fit into the categories of "man" or "woman," or “male" or “female", thus identifying as "non-binary."

But what exactly does the term "non-binary" mean?

"Non-binary" is the term used by people who don't identify as either male nor female.

The idea that there are only two genders is sometimes called a “gender binary," because binary means “having two parts." Therefore, people use “non-binary" to describe genders that don’t fall into one of these two categories, male or female.

On top of people identifying as "non-binary," some people have been claiming that "male" or "female" are not the only genders out there.

Despite our blatant physical anatomy...

They believe that there are over a hundred genders in which a person can identify.

British broadcaster, BBC, came under fire for promoting such an "absurd" theory...

Earlier this year, the BBC told teachers who work with children aged between 9-12 that there are “100, if not more" gender identities.

Though some people praised the idea of being inclusive...

Many people were outraged by the concept and insisted that the claim of a hundred genders was actually disrespectful to trans people, and therefore, not inclusive.

Many are set by the belief that there are simply two genders.

Stephanie Davies-Arai, the founder of Transgender Trend, which represents parents concerned about the surge in the diagnosis of children as transgender, said: “This is made-up nonsense. People are free to identify as anything they like, but this does not change the reality that there are only two sexes."

But, no matter what people believe...

It can't be denied that our customs and traditions cannot be classed as offensive to the small minority who claim to not have a gender... Right?

Despite the small percentage of people choosing to identify outside of the male/female/transgender categories, one of our most traditional customs and greetings has now been banned.

And it's all out of the fear of offending those who identify as "non-binary", or one of the "100 genders."

Audiences attending theatre performances in the U.K. will no longer hear the greeting, "ladies and gentlemen" under gender-neutral guidelines from actors' union, Equity.

The advice is aimed at people and venues working with LGBT performers.

Campaigners for LGBT rights say that phrases such as "ladies and gentlemen" exclude people who do not identify as male or female, but rather as non-binary, or as a gender outside the two traditional sexes.

The phrase is going to be "phased out"...

And the Royal Shakespeare Company has said that it will "strive to create environments which welcome and support trans people and people who identify their gender as fluid."

And it doesn't stop there...

The new guidelines also state that performers should not receive any "backhanded compliments" or be described as "brave."

Remarkably, many British theatres have been getting on board with these new rules...

Nica Burns, co-owner of the London theatre company, Nimax Theatres, said: "Coming to the theatre is a shared and communal experience in one single auditorium and we want to please our audience and give them a great evening. We wouldn't want anyone to feel offended or annoyed."

And this isn't the first move made by British theatres to accommodate the growing number of gender identities...

Last year, the National Youth Theatre production of the Shakespeare classic, "Macbeth" featured a female lead, married to a woman, while two out of the three witches were men - with one in a tutu, of course.

And the Old Victoria in London has also made some changes...

The theatre announced last month that it had scrapped its men and women toilets and replaced them with 'self-selection' facilities that can be used by all genders.

The phasing out of the traditional phrase caused quite the outrage online.

But many LGBTQ activists have applauded the move...

And have praised the theatres for taking a more inclusive and modern approach to how they treat their audiences.

And some people simply think the whole thing has been blown out of proportion...

And that the lack of "ladies and gentlemen" greetings will not spoil anyone's theatre experience... Which it definitely won't. In other "non-binary" news, the British musician, Sam Smith, has announced that they no longer identify with a gender, and had asked people to use certain pronouns when referring to them... Keep scrolling for the full story.