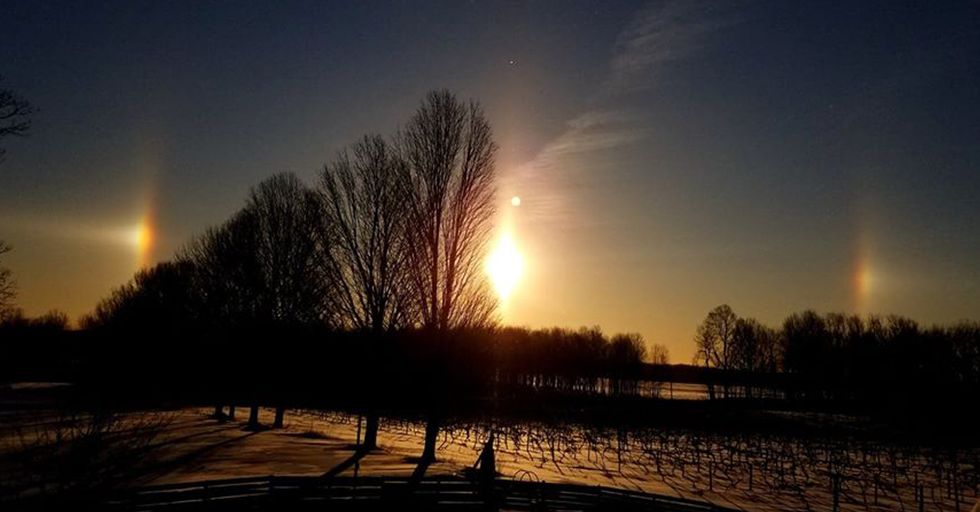 I don't know if you've heard, but the world is basically freezing over. Okay, well mostly the Midwest, but it's still absolutely freezing. Temperatures were at an all-time low, frostbite was dangerously common and residents were trapped in their homes for days until temperatures rose to a bearable level.

Could there possibly be any good news in the midst of these extreme temperatures? Science and nature say yes, and we are about to prove it to you.

Due to the freezing temperatures, the polar vortex has shown a very rare solar phenomenon called "Sundogs," and these guys are taking peoples' breath away. Photos have been spreading fast across the internet of this natural phenomenon and people are really enjoying capturing this glimmer of beauty and hope during this harsh winter season. Prepare to be blinded by beauty because these brilliant Sundogs are the silver lining to these crazy winter storms.

Yes, our earth has frozen over.

This winter has brought unbelievably cold temperatures in parts of our country, and people are kind of freaking out.

The polar vortex has made its home in the states.

The polar vortex is a really big area of low pressure and cold air. It surrounds both of the Earth’s pole, causing extreme temperatures.

Someone must have upset Elsa.

The polar vortex has been blown down to the United States and it's been taking over states with insanely low temperatures. Some areas in the Midwest have temperatures as low as -31 degrees and with a wind chill, it was as low as -51 degrees.

In cities like Chicago, residents were throwing boiling water into the air and watched as it turned into icy vapor in just seconds.

Freeze your pants off, literally.

For some reason, these frozen temperatures were bringing out everyone's inner scientist. This Minneapolis man used the cold as an excuse to freeze some pants and set them up to take some crazy pictures.

I have goosebumps just looking at these photos.

It seems nearly impossible to have a good time while the polar vortex is having a field day, holding absolutely nothing back.

But there's beauty in spite of it all.

Nature always finds a way to amaze us and because of the polar vortex, it's bringing about a very unique phenomenon.

Have you ever heard of a "Sundog"?

Yeah, I thought it was a dog laying in the sun, too. Which is still amazing. But this has more to do with science.

It's a solar phenomenon!

The polar vortex that has brought deadly cold and record-breaking low temperatures to the Midwest has also resulted… https://t.co/yNfWeZKw32
— TIME (@TIME)1548975610.0

Sundogs usually form in pairs on either side of the sun, when rays of light refract through icy clouds. It's like the sun's bright reflection off of the pure white snow creates these beautiful mini suns, creating a halo effect.

How unbelievably beautiful is this?!

It creates such a beautiful and rare sight that almost makes the cold temperatures worth it.

We've got a lot of Sundog chasers.

An impressive display this morning in the sky! Lots of you have sent these sundogs in this morning. It happens fr… https://t.co/CXOPya3zwu
— Garry Frank (@Garry Frank)1548942605.0

People were trying to catch a Sundog in their own backyard and capture its natural beauty.

They happen all over the world, wherever it gets cold.

If you've got snow, there's a good chance you have a Sundog somewhere near you.

It's beauty is almost blinding.

It's not the best idea to stare directly at it, but it's so hard not to be blinded by how stunning it is.

Look at those happy trees.

Impressive looking sundogs this evening in Nashville from Laurie. These develop a lot more this time of the year b… https://t.co/YA8vJJxJuh
— Garry Frank (@Garry Frank)1548888556.0

It looks like a real-life Bob Ross painting. I'm blown away.

I think Bob would approve.

Could you imagine if Bob painted a Sundog? That would be almost too much joy to handle.

Even if it's cloudy, you can still see the halo.

Check out these dueling #sundogs I spotted in Grand Rapids, a type of halo produced by refracted light in our froze… https://t.co/VHNgD1R9Rf
— Brody Carter (@Brody Carter)1548941945.0

Every Sundog is different and they are all truly beautiful, just like real dogs.

Hopefully, with more sun it creates a little bit more warmth for our frozen friends in the Midwest.

So why are they called "Sundogs"?

There has to be some amazing scientific reasoning behind it all, right?

Actually, no, there's no reason at all.

Scientists and historians are pretty stumped as to the origin of the term "Sundog" and they just can't figure out why someone named it that. "Some experts believe the term may have arisen by way of comparing how parhelia follow the Sun to the way a dog follows its master," explains Wonderopolis.

I mean, who could blame them? You see something beautiful and it brings you joy, why not name it after a dog?

Is there such a thing as a "Moondog"?

This is a valid question. It's okay if you were thinking about it.

Yes, Moondogs are a thing!

They don't happen as often as Sundogs, but they are completely possible and still just as beautiful.

It usually only happens when it's a full moon.

Temperatures still need to be pretty low in order for Moondogs to appear, but they come out every once in a while to sweep you off of your feet.

Moondogs are good boys, too.

They're still just as amazing and loyal as a Sundog.

But there's also this Moondog.

It was an amazingly cute meme where people were using an empty paper towel or toilet paper roll to see their dogs as the moon, which is about the cutest thing ever.

Well, I really love this Moondog too.

When your dog is your sun and your moon, this is the kind of stuff you end up doing.

Look at this pug moon!

I wish the moon had a pug face. That would be the most beautiful part of nature for sure.

The Sundogs just know how to slay in the wintertime.

It takes the sting out of these negative temperatures.

Nature is quite the optimist, always bringing some light to the dark days.

This Sundog is just showing off.

I'm very impressed by this one. Who knew something could look so cool?

One more, for the road.

Just soaking in how incredible these things are. Makes me feel all warm and fuzzy inside.

Stay warm out there!

Don't let the sundogs give you frostbite! Make sure you're staying indoors and use this as an excuse to get caught up on your fave Netflix show. Share these amazing photos with your friends from the comfort and warmth of your couch!