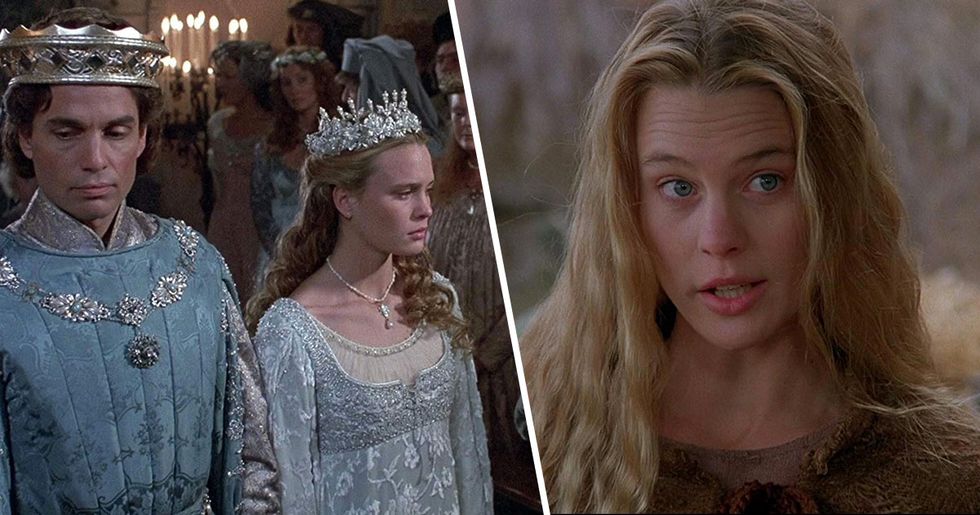 The Princess Bride was hands down one of my favorite movies growing up - I put that movie on plenty of times when I was skipping school as a kid. As soon as I would hear the door go, confident that my mom had left for work, the video would be out of its box and into the player.

Whatever it was that made The Princess Bride the classic that it remains today, one thing's for sure: a reboot is as necessary as Britain leaving the EU.

No one knows why it's happening, no one wants it, and everybody is angry.

I know he's wearing an eye mask, but this isn't A Cinderella Story, you can't just stick any good looking guy in a mask, draw on a little mustache, and call him Westley. Cary Elwes is Westley.

Seriously though, I can't think of a better scenario than the late Peter Falk playing the grampa that reads the story of The Princess Bride to his grandson. Why would you want to change that? It'd be like remaking Labyrinth with... I don't know, Ed Sheeran playing the Goblin King...

Nobody wants to see that.

And nobody wants to see anyone else playing one of the great Peter Falk's final roles. I mean, which great TV detective could you replace him with? David Suchet? Don't mess with Columbo, don't mess with The Princess Bride.

The fans will not go unheard!

Plenty of fans have reacted to the news that Sony plans to reboot the movie. Taking to Twitter, these fans are not downplaying their feelings by any standards...

SO I HEARD THERE MAY BE A PRINCESS BRIDE REBOOT AND HONESTLY HOLLYWOOD CAN FUCKING BURN! #Hollywood #notmyprincess
— CanItCryptid? (@CanItCryptid?)1568854622.0

We don't even know who could possibly be cast in the rumored remake yet. but we don't care. Not my princess!! Hollywood can burn!!

Everyone is hitting out at the Hollywood idea factory.

If Hollywood cant think of any new original stories to tell on the big screen , I stead of all these reboots remake… https://t.co/o0cRQO1Vvt
— Paul Duncan (@Paul Duncan)1568799233.0

I mean, to be fair... have they really ran out of good ideas? There does seem to be a whole lot of reboots running about at the moment... Maybe the human race really has just burnt out. Too much time spent on our phones, trying to keep up with the irrelevant information being shot at us from left, right, and center may well have stunted our imaginations.

Apparently, there are writers out in the world with new ideas...

A reboot of Princess Bride? Hollywood stop the maddness and just get new stories. I and all my writter buddies have… https://t.co/OOKqown3Zs
— SilentWillows (@SilentWillows)1568766998.0

Why not give some of these guys a call @Hollywood?? And leave our precious Princess Bride alone.

Twitter user, Jo Vice, puts it plain and simple... The Princess Bride was perfect. Why mess with a movie that took a script and made it as good as could be?

Don't make them cut off their ankles!

The princess bride is a cinematic masterpiece and I will personally destroy the ankles of anyone trying to reboot it
— 📌moved accounts (@📌moved accounts)1568819808.0

Sony seriously peeved people off with the suggestion of this reboot. If it does go ahead, there will rioting in the streets, trust me.

Even people who are normally up for a reboot do not want this.

Frankly, it's plain to see that nobody is excited about the possibility of a The Princess Bride reboot. Even with Sony hinting that they have some big names attached, people quite clearly believe that the original cast was as good as it could get.

The CEO of Sony Pictures has spoken out about the reboot.

Hoping to incite some kind of excitement about the picture, Tony Vinciquerra spoke to Variety and teased that some "very famous people whose names I won’t use" are attached to star...

If the little boy from the original played the grampa...

The only way A Princess Bride REBOOT works is if its Fred Savage retelling the story from memory to his kid and tha… https://t.co/M6dQDlxxUf
— Derek Ruiz 🇵🇷 (@Derek Ruiz 🇵🇷)1568804853.0

...frankly, even then I wouldn't want this movie to happen - but I can see what Derek from Twitter is saying. Besides, Fred Savage, (the actor that played the little boy) is still only forty-three-years-old. It wouldn't make sense for a "dad" to be telling the story, it's got to be cigar-puffing grampa. Maybe, just maybe, they could remake The Princess Bride in 2056. Savage will be eighty-years-old and I might be ready to see a remake then.

No classic movie is safe.

One day The Princess Bride will be remade. And a reboot of Back To The Future. So will Jaws. Neverending Story Netf… https://t.co/YUxmiIJ2O8
— Eddie Bowley (@Eddie Bowley)1568793274.0

Twitter user, Eddie, warns that, with this news, it's clear that none of our beloved classics are safe. Do the cinematic picture people not appreciate that making a reboot can destroy the legacy of the original movie? Don't they appreciate that we want to introduce our children to Jaws and be like "this movie changed things," without them biting back with, "oh I saw that, I saw the newer one on Netflix 2.0 aaages ago." Christ, the future is scary.

It truly is inconceivable to think that they can do this to us.

And there's literally nothing we can do. Is there no way that we can protect our most beloved movies from being pillaged in this way?

Considering the reboot of The Princess Bride and the upcoming LotR series, I bet Harry Potter will get a planned re… https://t.co/h9zWBRmSSb
— Philip (@Philip)1568796970.0

That is, of course, until they get some Charlie Cheese right out of kindergarten in to play Potter in the remake. You watch my words, one day, the Potter franchise that we know and love will become more diluted than my the cola they sell at McDonald's.

I was so mad when I heard that they were remaking Overboard .

I was also really irritated that they wanted to reboot Overboard, but nobody saw it and it will soon be forgotten.… https://t.co/qSJAznW8Lr
— Amelia (@Amelia)1568767537.0

But, as Amelia points out, who watched that, right? I haven't heard one person discussing the Overboard remake since it came out in 2018. That's probably because it tanked. Do you know why it tanked? Because you can't mess with perfection.

Overboard (2018) is the reason that they shouldn't remake The Princess Bride.

Even though the new Overboard movie absolutely sucks and has none of the charms that the original does, anyone looking for the old movie will have to sieve through this trash on the internet. When you Google "Overboard," do you know what comes up first? This terrible reboot! Film critic, Peter Travers, from Rolling Stone, rightly put it: "Goldie and Kurt forever. No substitutes accepted." In this version, they swapped around the roles (with it being the guy that loses his memory) but, still, it fails to catch. And now it's hidden the 1987 original from those that might be discovering it for the first time.

The original, 1987 Overboard was perfect.

The casting was perfect, the romance between Kurt Russell's Dean and Goldie Hawn's Joanna is palatable (I mean, the two actors actually fell in love for real while shooting it) and the locations, clothing choices, and little moments made this a little gem of a movie. Do you remember the golf course? Messing with Overboard was like your mom taking a drawing that you'd done as a kid out of its frame, shredding it, and buying a crappy stock image of a frog or something to replace it. Uncalled for is an understatement.

Is this what we are going to have to brace ourselves for with The Princess Bride?

Why would you even try to recreate the onscreen romance of Robin Wright and Cary Elwes?

Oh really? Well, I married the six fingered man, obviously why we have stayed together for 35 years and there is on… https://t.co/RATDQzf4sb
— Jamie Lee Curtis (@Jamie Lee Curtis)1568733825.0

Nice one Sony, well done. Curtis is indeed married to Christopher Guest, who played Count Rugen in the movie. It's unsurprisingly upsetting for the original cast to hear about a reboot. It's basically like erasing them.

Cary Elwes is refusing to be erased in this way.

I mean, he can't exactly prevent the reboot from happening, but the actor can certainly slate it on Twitter and put up the good fight! Rewording one of his famous quotes from the movie to attack the reboot is a good start.

I mean, there's plenty of lines for him to choose from.

I sincerely hope that Cary Elwes starts a Twitter thread that is a full-on attack on Sony Pictures done solely through The Princess Bride quotes.

Cary, I don't know either.

I feel like whoever suggested The Princes Bride reboot isn't a true fan of the original. A true fan would have left it alone. Someone that is interested in making a quick buck, that's the kind of person that would do something like this.

Surely it would be a risky move to work on this reboot...

If any of the supposed "big names" that Sony Pictures have claimed to be attached to the reboot knew how unfavorable doing so would make them, would they still do it? I mean, if being part of the reboot would be career suicide for anyone that was in it, maybe it won't get made?

My theory is that, if enough people slam Sony Pictures for even considering doing The Princess Bride reboot, maybe they won't do it. Shooting hasn't begun on this remake yet so, come on, one and all, get on Twitter and tell Sony Pictures how much we do not want this to happen. The people will be heard. If you want to hear about another reboot that simply shouldn't be happening, continue scrolling. Sadly, this one is definitely going ahead...