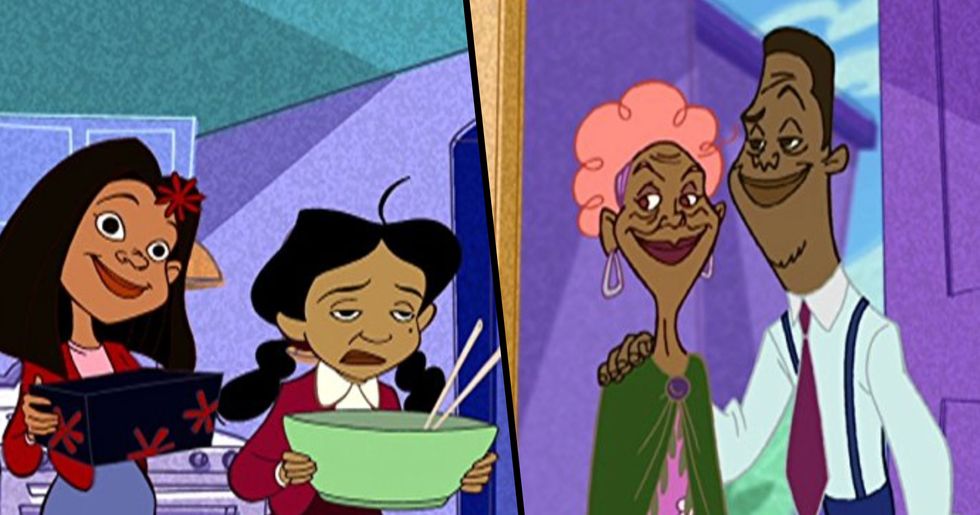 'The Proud Family' Is Reportedly Returning With New Episodes on Disney+

It seems to be streaming madness at the moment. NBC has announced a bunch of reboots for its new service, Apple TV + has launched, and Disney's new streaming platform has got everyone excited about all our classic favorite shows.

From old childhood classics and nostalgic TV shows, to modern live-action movies and of course, lots of Marvel, Disney + is shaping up nicely.

But one classic Disney cartoon did not initially appear on the platform, causing a lot of disappointment.

Which show am I talking about? Why The Proud Family of course.

Fortunately, Disney+ are ready to rewrite that wrong and are now promising us new episodes.

Continue scrolling to see some of the most popular shows streaming on Disney+ as well as all the info about the highly anticipated The Proud Family reboot.

Now, what else did you expect? Of course, we're all running at the chance to cry again over this heartbreaking story. For those that haven't seen it, and cried for days...Bridge to Terabithia tells the tale of Jesse and Leslie who create an imaginary world called Terabithia, which is inhabited by a whole host of magical creatures.

Starring Demi Lovato and the Jonas Brothers (aka the epitome of childhood), the movie tells the story of a teenage girl who desperately wants to spend her summer in a rock camp, but the only way she can get in is by working in the kitchen. But, everything changes when a teen pop star overhears her singing.

Okay, this is not a drill. Disney is dropping all 3 High School Musical movies and we honestly couldn't think of a better way to spend the weekend.

Once again, there's another Disney Channel classic coming to screens. Both the Suite Life of Zack and Cody and The Suite Life on Deck, starring Dylan and Cole Sprouse are heading our way.

There's no doubt that Lio and Stitch is an underrated gem in the Disney catalog, which is why we're so pleased to see it added to the lineup. The movie tells the story of  Lilo, a lonely Hawaiian girl who adopts a small ugly "dog," whom she names Stitch, who actually turns out to be a genetic experiment that has escaped from an alien planet.

Next up is animated series, Kim Possible, which chronicles the adventures of Kim Possible, who looks like an average high-school cheerleader, but in her spare time, she fights supervillains.

Let's be honest, this is a classic '90s kid movie. Iconic doesn't even come close. The movie follows Lizzie McGuire (Hilary Duff) and her closest pals as they head off on a school-sponsored trip to Rome during summer break.

The Emperor's New Groove follows a self-centered Incan emperor, Kuzco, who is transformed into a llama by his ex-advisor, Yzma. In order for him to be able to change back into a human, he enlists the help of a village leader named Pacha, who escorts him back to the palace.

We can already hear the theme tune playing in our heads... Animated series, Phineas and Ferb, follows Phineas Flynn and his stepbrother, Ferb Fletcher as they invent, scheme, and try and remain one step ahead of their bratty sister who is determined to snitch on them.a

A pre-Transformers Shia Labeouf takes center stage in this hilarious comedy series that centers on a seventh-grade misfit as he tries to make his way through the trials and tribulations of school and his seemingly "perfect" family.

Finally, we've got the hit series, That's So Raven.  The comedy follows the life of Raven Baxter who can see glimpses of the future and subsequently enlists the help of her friends to change small bits of future events. "I just had a vision!"

Back by popular demand, Disney+ is offering us the chance to catch up with Penny Proud and her family.

After a successful 4 year run, Disney called an end to the popular show. It's almost surprising to see it get picked up again some fifteen years later.

Give the people what they want...

Many people called out Disney+ for not re-releasing old The Proud Family eps when they launched the streaming service with a vast bank of Disney classics.

What was so good about The Proud Family?

Well, firstly it starred the badass Penny Proud who was attempting to navigate the tribulations of high school, as well as the trials of being a teenager, a person of color and a woman.

Penny always stood up for what she thought was right. Penny wasn't afraid to call out her friends when they were being fake, call out the football team for not letting girls join, and call out her dad when he was embarrassing.

The show explored Penny trying to understand her heritage.

With a diverse family background, Penny's search for her cultural identity becomes an interesting focal point to the narrative.

The Proud Family had arguably the best theme tune ever. Destiny's Child and Solange teamed up to sing the iconic title track.

The Proud Family are bringing in subscribers.

Since Disney announced they would be adding The Proud Family to Disney+ and that they would be releasing new episodes in February 2020, the subscribers have been flooding in. Frankly, we can't wait.