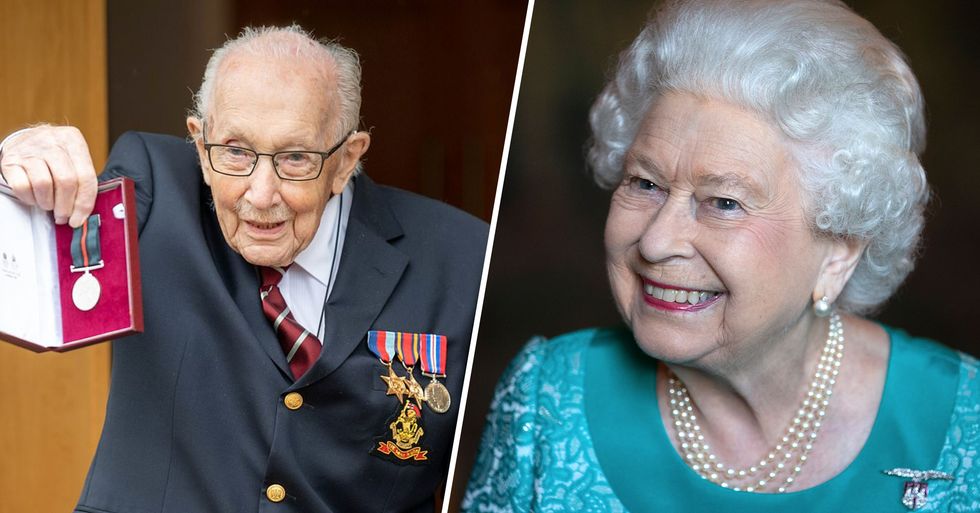 After WWII hero Captain Tom Moore finished the 100th lap of his garden, he didn't expect to be the talking point of the entire nation, let alone the entire world. The veteran managed to raise a whopping $35 million to provide aid to front line workers. And now, on his 100th birthday, the Queen decided she would give him a day to remember.

Keep scrolling to see all the amazing photos from the spectacular occasion...

Front line workers have been the beating heart of our nations.

In our time of need, we rely heavily on the incredible work of the emergency services and healthcare professionals.

Yep, really. Over the pond in the U.K, tens of thousands of retired medics are being asked to return to the UK's National Health Service in order to "boost frontline services," as per the BBC.

And one army veteran embarked on yet another mission to serve his country.

Despite already risking his life to serve his country, Moore still had plenty left to give.

The veteran hasn't lost his spirit, that's for sure.

Moore - with help from the more tech-savvy members of his family - set up a fundraiser for all the doctors and nurses risking their lives during this crisis earlier in the month.

His goal was to walk one-hundred laps of his garden before he turns one-hundred at the end of this month and of course, he reached his target. Keep scrolling to see a heartwarming video of him completing his final lap.

But his target was quickly surpassed.

He had nothing but good words to say about the UK's National Health Service.

He said: "When you think about who it's for, those brave and super doctors and nurses we've got, I think they deserve every penny. I hope we get some more for them too."

The donations had been building day by day...

And now, at the end of the month, the WWII hero has managed to raise a whopping £29 million which is just over $36 million dollars guys. Incredible!

So he deserves all the praise he's getting...

As well as being a prime example of what the nation is about, Moore has also been inspiring others to get involved in raising money to help those who need it most.

And on his 100th birthday, the Queen herself gave him a day to remember...

It all started with a hand-written letter from Her Majesty before she promoted him to Colonel to mark such a wonderful occasion.

And if that wasn't special enough already...

The hero was also re-presented with his Second World War Defence Medal ahead of next week's VE Day celebrations, which is an important occasion for the Brits.

There will be lots of cake and lots of champagne but the Queen has also planned to do one more thing...

There will be 2 "flypasts" to mark his special day. Both by Army Air Corps helicopters as well as a Spitfire and Hurricane in the Battle of Britain Memorial Flight. Wow. Just wow.

This comes after he was hailed "the spirit of our incredible veteran community but also the resolve of this nation."

Ben Wallace, the country's Defence Secretary honored Colonel Tom with the comment and also referred to him as an "inspirational role model to generations young and old." This treatment is well-deserved. Happy 100th birthday Colonel Tom Moore!

And make sure to keep scrolling to learn about the man who sanitized a package for a girl who had an autoimmune disorder...