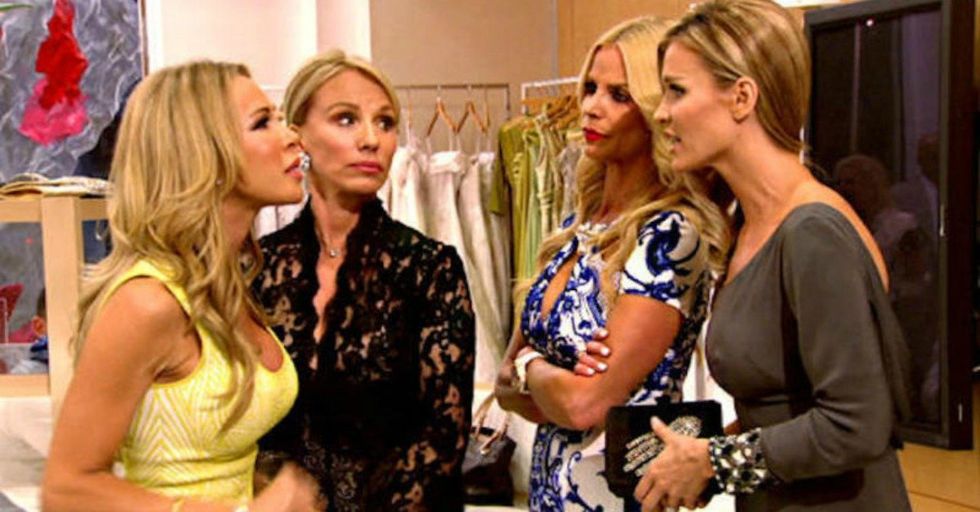 Who needs more of our favorite televised drunken trainwreck? WE DO, apparently, because The Real Housewives is getting another franchise!

But where will it be filmed this time? You might be surprised.

Real Housewives is the perfect thing to cheer you up at the end of a long, stressful day.

It's the quintessential guilty pleasure show, and every time someone throws a drink in someone's face is television gold. It instantly makes you feel better about your own life, while at the same time making you half-wish you could live as extravagantly as these crazy women.

It all started with The Real Housewives of Orange County.

The popularity of the original soon lead to eight additional versions, with filming locations ranging from New York to Atlanta to Miami to Dallas. While everyone has their own favorite installment and character (because even though they're "reality" shows, these women are definitely characters), most people tune in for one thing and one thing only: the drama.

We can't help but wonder if the combination of a bottomless bank account and way too much free time just naturally leads to this type of behavior or if it's engineered for ratings. Either way, we're tuning in.

The sheer volume of plastic surgery also makes for some fascinating scenarios.

Take Vicki here, for example. Although she says that she "can't even tell you how mad she is," you've definitely never know it based on her somewhat muted facial expression. Is Botox to blame? We can only assume.

So when fans were teased with the idea of a new Real Housewives series, the speculation immediately started.

Where would it be located this time? Seattle? Milwaukee? Hipster housewives in Portland, maybe?

It turns out, the new season will take place in a state familiar to the Housewives crew.

Florida. The show's producers are currently scouting out several locations in the Sunshine State that seem like might be a good fit for a new group of sassy socialites. But where will they choose?

They've narrowed it down to three cities:

Fort Lauderdale, West Palm Beach, and Boca Raton. Hmm ... we've gotta say, we're not super into any of these three choices. It just seems like Florida's been done. Why not mix things up a bit and give us a location that we haven't seen a million times before? We're pretty sure there's also drama in the midwestern states.

Many fans were surprised at the decision to return to Florida.

The Real Housewives of Miami had a three-season run, and while it launched a few household names, the show got horrible reviews. At least we know that Miami is definitely out for the new series.

So, let's go over each option to weigh the pros and cons before choosing a favorite.

First off, Fort Lauderdale. Pro: Beautiful sandy beaches, the opportunity for some amazing yacht fights, and maybe a shark attack or two. Cons: Boring! Haven't we seen this all before? It's practically next door to Miami.

Pros: More beautiful sandy beaches and possible shark attacks. Cons: Mar-a-Lago is in West Palm Beach, and if there's the possibility that Melania Trump could make an appearance. Although she'd fit right in, this would totally ruin the whole point of watching Real Housewives, which is to forget about the horrible things happening in our country with drama and wine.

And what about Boca Raton?

Pros: The Real Housewives of Boca Raton definitely just sounds right, somehow. Cons: Apparently, Boca was seriously considered for a previous RH series, but was passed up, for some reason. Maybe it was due to the fact that the town is so popular with retired seniors?

Wherever they decide to film the next franchise, we're resigned to the fact that we'll most likely be watching.

There's just no better place to get your drama fix than RH. And really, it serves as a cautionary tale on how dangerous a combination of money, booze, and cattiness can be. They should really add it to high school curriculums.