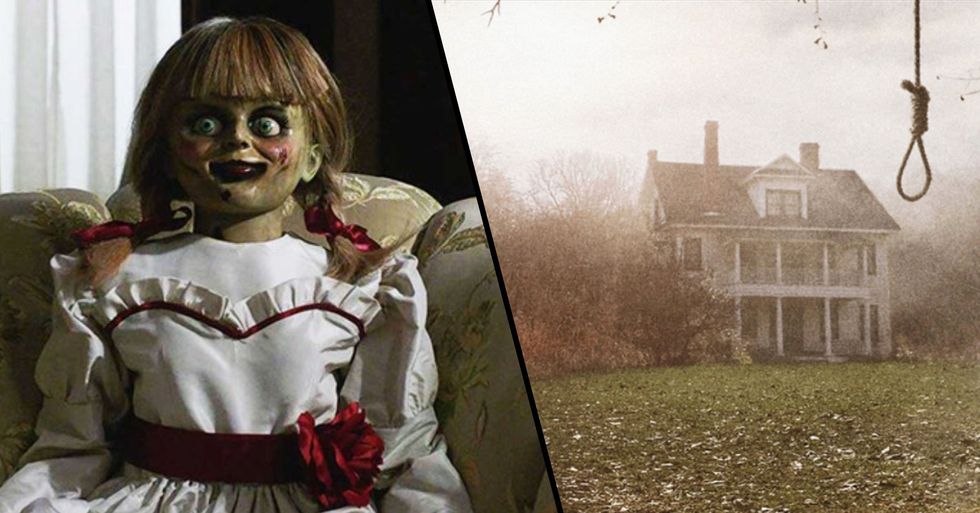 It looks like our lockdown is about to get a little bit spookier.

The real-life Conjuring house will be live-streamed exclusively for a week to try to capture all of those paranormal going-ons.

Keep scrolling to find out exactly. what we're set to see...

Whether it's true crime, legendary monsters, unsolved mysteries, or paranormal activity, there's something about creepy things that have an undeniable draw.

Horror is one of the most popular genres...

And whether people like to admit it or not, we all love a good horror movie every now and then.

And one of the most popular horror franchises is The Conjuring.

There's a wide range of films in the franchise...

Perhaps one reason for its success, is that it plays into a favorite horror film trope - that of the haunted house.

But there's something that makes these movies even more frightening...

The fact that the events of these films are all based upon true stories. The inspiration behind The Conjuring franchise are experiences shared by real-life paranormal investigators.

Here they are back in the day...

Their names are Ed and Lorraine Warren, and they were essentially ghost hunters. You may be more aware of their most famous case, The Amityville Horror.

The eldest of the Perron children, Andrea, has recounted horrific memories: "I thought I was going to pass out. My mother began to speak a language not of this world in a voice not her own. Her chair levitated and she was thrown across the room."

And as the years have passed...

Rumors of the farmhouse remaining to be haunted have been nonstop.

And, of course, it didn't the couple long to start hearing strange things.

Speaking in an interview, Cory explained what was going on.

He told the Sun Journal that they witnessed "doors opening, footsteps, and knocks." He also added that he had "a hard time staying there by himself." "I don’t have the feeling of anything evil, (but) it’s very busy. You can tell there’s a lot of things going on."

That gives us shivers just thinking about it...

And even though the thought of staying in the house is utterly terrifying, people continue to hold a strange fascination with the haunted house.

But now, the opportunity has arisen to experience the house first hand.

From May 9th - 16th, you can gain access to a live-stream of the real house.

We can now watch life unfold in the infamous house in real-time...

Cameras will be rigged around the entire house...

And the stream comes courtesy of The Dark Zone, a community that "embraces the vast spectrum of all things paranormal."

The official synopsis for the week-long event reads:

"The world is on lockdown and so is the family living in the house that inspired The Conjuring. Watch as the Heinzen Family shows you how they live among the spirits while toughing out this worldwide pandemic."

The live stream won't just be featuring the house alone, however...

The organizers will "conduct paranormal investigations, seances, Ouija board sessions and invite some of the most well-known and respected luminaries in the paranormal community to pop in remotely and share their most bone-chilling experiences from the house."

But it is totally worth it...

Watch the teaser trailer here. Make sure to keep scrolling to read about how Macaulay Culkin has joined the cast of American Horror Story...