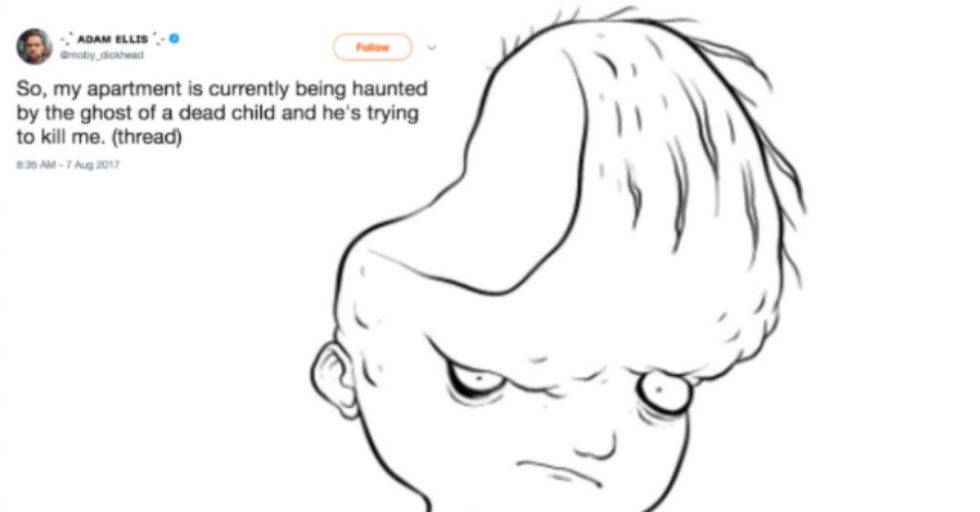 These are the kinds of times when it would be really good if the Ghostbusters were real.

BuzzFeed staffer Adam Ellis is being haunted by the ghost of a dead child named Dear David and the story will make you pee your pants.

This is legit, people. Ellis wrote on BuzzFeed, "For the past couple months I've been dealing with a ghost. It's gotten bad enough that I fear for my safety, so I decided to write everything down in a Twitter thread, in case I go missing. I've added some images for dramatic effect, but everything here is 100% real."

Yeah. Real and TERRIFYING. The whole spooky story is below.

Ellis starts out real casual, so as not to immediately arouse panic.

"So, my apartment is currently being haunted by the ghost of a dead child and he's trying to kill me. (thread)" Could you imagine if this wasn't a thread? If he just left it at "Oh yeah, I might die"?

Luckily, there's much much more to this story.

You know it's bad when dream spirits cross over and become real world spirits. The haunting has begun.

If you don't know, sleep paralysis is a real thing. It makes you unable to move your body either when falling asleep or waking up from sleep, you can experience hallucinations, and it's scary as hell, especially if you're seeing a small child rocking in a chair at the end of your bed.

This is super scary no matter which way you slice it. Bad dream? Still awful. Real haunting? Even worse. This is a lose-lose situation.

Oh great! A deformed ghost boy is crawling toward Adam and he can't move because he's experiencing sleep paralysis. No biggie. Nothing terrible and nightmare-inducing here!

Why would Ellis scream? The creepy ghost child was probably just "shambling" up to his bed because he wanted to cuddle.

As if the little ghost boy wasn't enough, now there's a girl in a library? Talking about "Dear David"? UH-UH.

OK, let's recap. 1. Dear David is dead. 2. He appears at midnight. 3. You can ask him two questions if you say "Dear David" first. That's three reasons to pack up your life and move out of the country.

Third question to Dear David = death. Bet you can guess what happens next...

Dear David never came back and all was peaceful and wonderful from that day forward. Just kidding, everything gets worse.

Great! That's all the information Ellis is going to get. He already asked Dear David two questions. Time to pack it up and stop the interrogation.

Why'd you have to go and ask a third question? C'mon man! Now, Ellis didn't say "Dear David" before the third question, so maybe he's in the clear?

If only Ellis could have controlled his dream curiosity and not asked that third question. Now we're all doomed.

Deaths In the City

What is Ellis doing researching? He should be on a plane by now.

He can't find anything about a kid who died in a store. Meanwhile, it seems like Dear David is leaving him alone.

Maybe I'm wrong. Maybe Ellis has been ghosted by a ghost.

Dear David just wanted to lull Ellis into a false sense of security. And it worked.

If any creature can sense evil, it's cats. You know, since cats are also evil.

Yeah, Ellis is pretty definitively being haunted by the ghost of a deformed dead child named Dear David who is trying to kill him.

Here's hoping that Ellis is OK, that Dear David is really just looking for a friend, and that he doesn't like people to ask him too many questions because he just doesn't really like to talk about himself. We can't wait for more updates. Preferably of the "Dear David and I are now best friends and we're going to get mani-pedis" kind.