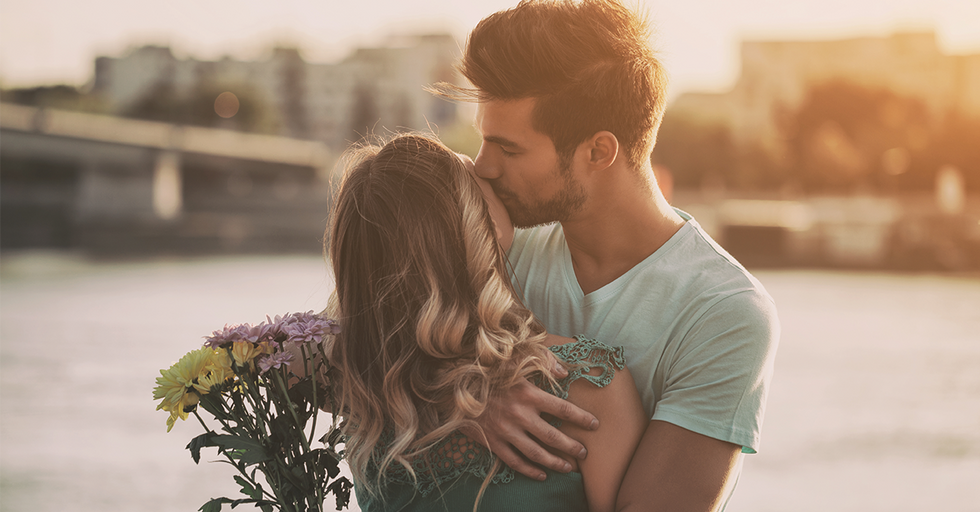 The Real Psychology Behind Falling in Love

Romance is a strong motivator for humans. Whether it's people who will do anything to find love or those who can't seem to make it work, a connection is something we all want. Of course, figuring out how to find the right person can be just about impossible. Advice ranges from "play hard to get" to "be open and honest". What's a person to do if they just want to find The One?

Well, a good place to start would be the science of the matter. What actually happens to your body and your brain when you fall in love? Which traits have scientists found to be most appealing to a romantic partner? And which tactics are most likely to cement those happy first butterflies into a solid foundation of love?

Let's take a deep dive into the actual psychology of falling in love to find out how you can match with that special someone.

You might think there's no rhyme or reason to why people fall in love.

But psychology can give us some idea of what traits will help you attract a mate. Let's take a look at some of the studies that have shown what will make people fall in love.

It is easy being green.

You might want to start recycling because a 2016 study found that people who make "eco-friendly" purchases are the ones who understand commitment. Unless of course you just want a fling, because spending the big bucks on a luxury item will make people think you're hot.

It is confusing though...multiple factors may be at play.

In fact certain traits may only be beneficial if the person is already interested in you. For example one study in 2014 found that if a man was committed to a woman, playing hard to get made him want her more. What even??

Plus the way you feel can impact if other people want you.

AND it's gender dependent. If you're a woman you probably should smile more if you want to attract a mate (happiness is attractive on women), but if you're a man you might want to look proud, at least according to a 2011 study.

But overall there are trends based on gender. Men tend to be more interested in a new face, while women rate someone familiar as more attractive.

But regardless of gender, if you make yourself a bit larger than life, you'll do well.

So here's a weird one: be big. No, not tall, but take up a lot of space with your posture and your gesture. The more you move your hands and arms, the more likely people are to want to see you again. Even in photos on your dating profile it's important to take an expansive posture. Or at least that's what one 2016 study found.

Oh, and for the love of everything have something in common with your partner!

Sure you might think that opposites attract, but one study focused on eHarmony found that partners at all stages in their relationships have better connection when they're generally similar.

There are actually quite a lot of ways that it's important to match with your partner.

One psychologist, Eric Berne, identified three different areas. He calls them the parent, the child, and the adult. In his work, successful couples match in all three of these areas.

The parent of your personality is what you've been taught in your life. If you match well with someone else in the parent realm, you'll have similar beliefs and values. You approach the world in the same way.

Your inner child, according to Berne, is what you feel. If you connect in the child realm you'll have fun with your partner. You'll be spontaneous together and have good chemistry.

If none of that works you can just stare at each other.

This sounds horrible, but there was a study in 1989 that paired up complete strangers and had them make eye contact for two full minutes. They ended up feeling affection towards the stranger. Weird, but perhaps effective?

If all that fails you could try just being nice.

John Gottman calls it "bids". If you try to share or open up to your partner and they respond, they've turned towards you. In one study, divorced couples only "turned towards" 33% of the time, but those who stayed together did it 87% of the time. I would argue this could just be called "being nice" and is what you should do for everyone.

You might think that how your partner looks will predict if you're attracted, but it's not the only sense that's important.

In what is most certainly one of the weirder studies, women who were ovulating were more interested in the smell of shirts worn by men with high levels of testosterone. Who came up with this?

According to David Perrett, people are attracted to people who have the same hair and eye color as their parent of the opposite sex. Come on you guys, that's weird.

Apparently when people rate the attractiveness of faces they will rate faces similar to their own as sexually attractive. Oof.

But now we have scientific evidence. One Israeli study found that women are more interested in a man who owns a dog, and another study found that even been seen with a dog makes you more approachable.

So how do these things actually work to make you fall in love?

It's time to get into the nitty gritty of what your body does when you fall in love.

It's all chemicals my friends.

It starts with dopamine, which gives you a boost of excitement and happiness. You'll get a hit of that when you start to feel interested in someone new. But what you might not know is that dopamine also increases testosterone, making everything more sensitive and giving you a bit more impulse to pursue that special someone.

And then it's attention and focus.

After that initial dopamine rush, your brain starts to tell you to pay attention only to the person you want. This happens through norepinephrine and phenylethylamine. If you can't say those words, that's ok: just know that they're neurotransmitters that focus your attention, give you feelings of euphoria, and act as stimulants. That's why you might stay up all night thinking about them.

Add in a few hits of pleasure and you've got a nice cocktail that starts to look a lot like love.

And then comes the kicker: it turns into a feedback loop. If you manage to get a little time with the person you want, you'll get a hit of pleasure which engages the reward system of the brain. You'll then keep pursuing that same stimulus...which gives you more pleasure...which makes you go after it again.

It goes even deeper than that, with the release of oxytocin:

Oxytocin is what people affectionately call the "cuddle hormone". It's a lot more complicated than that, but it is linked to bonding, trust, and loyalty. The important part? It gets released when you orgasm. As you get closer to your potential partner, your brain bonds you.

As we all know, it's simple when you first fall in love.

At the beginning, that reward system gets started with little things: a small touch, seeing their face, or thinking about them.

But over time it gets harder.

The problem is that when we start to fall in love, we make ourselves vulnerable to rejection. That can create a variety of problems that sour the relationship: maybe you get overly clingy to try to keep the relationship, or you keep your lover at arm's length to stay safe.

Some psychologists call this the "ordeal" stage.

You start to notice all the things that are wrong with your partner. Things that didn't seem like a big deal at first are now starting to get under your skin. Or maybe you're realizing that what seemed cute at first is actually incredibly irritating.

The biggest one is putting up walls. You don't want to upset your partner so instead of letting them know you're frustrated, you just don't share. Or you do share, but simply complain and get resentful that they aren't perfect. This is how relationships end.

Or maybe the person is actually a problem.

Sometimes this is the point at which you find your lover is actually not a great person: maybe they're dishonest, abusive, mean, or just not right for you. Although your brain has built quite a chemical cocktail to keep you attached, it's important to notice when there is a real problem.

But if we can follow some clear guidelines, our brains are built to want healthy connection.

Know yourself and what you want, and don't be afraid to speak up openly and honestly. That will help you really learn your partner, and improve your own self-esteem. Know that sex will increase bonding, and this can be both helpful and harmful.

And once we've got those chemicals bonding us to our someone.

It's tough to break up the bond of love.

So don't be discouraged.

There's a formula for love, you just have to know what it is.