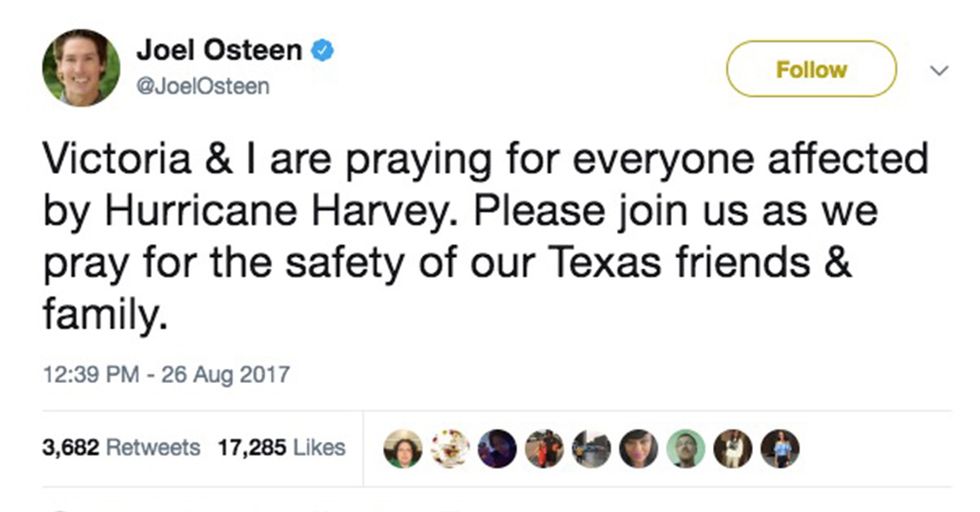 For years, Texas pastor Joel Osteen has been a controversial figure among Christians and the population at large. While he serves as a trusted spiritual leader to many, to others he represents the intersection of greed and religion, having made millions off of other people's faith and taking criticism for turning his services into performances and pitches, filling up his 16,800-seat suburban megachurch with his faithful every Sunday.

As we all know, the Houston area is embroiled in disaster at the moment, enduring ongoing flooding from Hurricane Harvey.

Fortunately, locals and out-of-towners alike have been quick to lend aid in any way they can. Donations, offers of shelter, and even civilian rescue missions are underway to ensure that the area weathers the storm as safely as possible.

Like so many others, pastor Joel Osteen took to social media to offer his best wishes for those affected.

He lives and preaches on the outskirts of Houston, so this flood affects many of his parishioners.

Here's the message he sent:

While it seems innocuous and pure hearted enough on the surface, it kicked off a firestorm of activity and criticism among those who read it.

Many were appalled that the Christian icon, with millions of dollars and facilities at his disposal couldn't do any better than "thoughts and prayers" while people were displaced and suffering through the storm.

The responders were upset because he was a man of privilege and a man of God, yet his 16,800-seat megachurch sat vacant while many braved the elements, their homes destroyed or uninhabitable. This tweet sums up the sentiment nicely, but there were thousands like it, offering variations on the opinion expressed here.

Others took a more innocuous approach.

Asking, rather than accusing, but still hoping for a satisfactory answer from Osteen. Eventually, he responded, but it wasn't without a fair amount of coaxing and controversy.

These requests and accusations quickly turned to public outrage and demands.

Time was a factor, and the longer he went without a response, the more people became impatient. As you can see, it went from a request to an "obligation" by many.

As outrage often does, it turned viral.

People were quick to fan the flames given Osteen's perception as being a capitalist over a Christian, and this issue seemed to highlight the hypocrisy of those dual roles to many.

The word circulated that his church was flooded and inhabitable, much like others in the area.

However, people were skeptical, to say the least.

Anecdotal evidence came in that the church was surrounded by buildings that were open and helping those displaced.

The sentiment being, if a furniture warehouse can open its doors to the needy, why can't a large, vacant church?

People in the area shared pictures that suggested the church had been spared flooding.

So why weren't the church officials opening their doors? People were demanding answers and finally got a response from the church.

Without addressing the controversy that had been brewing, Osteen tweeted out something more productive than a call to prayer.

He offered up a way for parishioners and the general public alike to donate to relief efforts. It's something, but was it enough for the angry critics?

The church would open its doors to those in need.

Through a spokesperson, the pastor offered this message regarding the aid and the recent controversy.

Many are, naturally, skeptical, because this message only came after public outcry, leading more than a few people to believe that had people not spoken up on social media, the doors wouldn't have been opened to the desperate citizens of Houston.

Nonetheless, the church got to action quickly, outfitting the building with air mattresses for those seeking refuge and shelter.

While this is good news for many in need, it also serves concrete evidence that the church was not and is not in danger of flooding, otherwise, it wouldn't open its doors, putting many in danger.

While the outcome is what the public sought, the seeming reluctance of the preacher to open the doors has many exasperated.

Too little, too late, they feel. Skeptics feel it was more of a PR move than one of Christian conviction. We'll likely never know what occurred behind the scenes that led to both the reluctance and the decision to open, but ultimately, the most important thing is that those displaced by Harvey have a place to stay. Though many feel that should have been the case last night...

If anyone in the area is seeking refuge or no someone who is, Lakewood Church will now take you in.

Regardless of circumstances, this event will serve as a blessing to many in need.