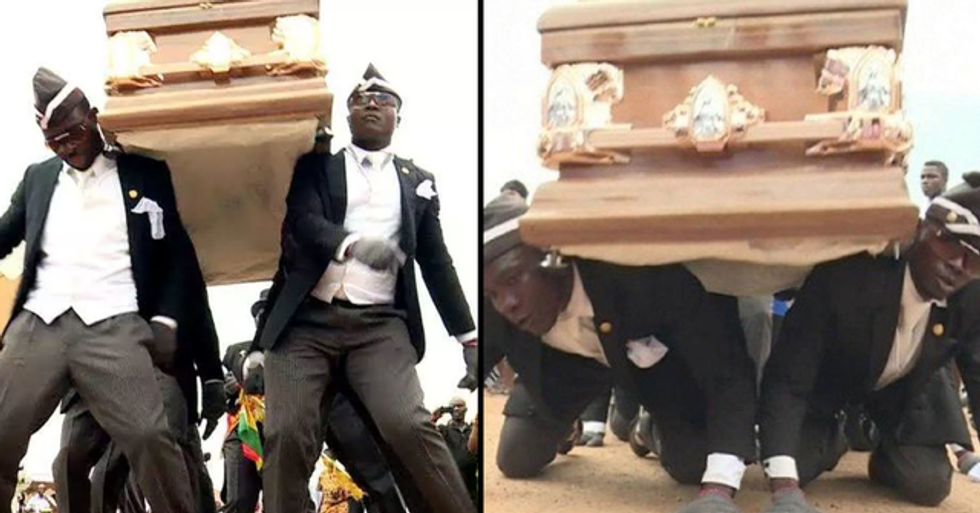 Bizzare footage of dancing pallbearers is currently dominating the internet, with nearly every other meme being based around the eccentric funeral-goers.

But, putting all memes aside, there is actually a rather peculiar story behind their flamboyant dance moves...

The dancing pallbearers are fast becoming the meme of 2020.

By now, I'm sure most of you will have seen one of the many bizarre videos of 6 suited pallbearers in Ghana, throwing a variety of shapes while copiously balancing a coffin on their shoulders.

The footage of these unique pallbearers has recently gone viral...

While most pallbearers walk slowly and solemnly as they carry a coffin to its grave...

These pallbearers give a funeral experience of a whole new level.

The internet has gone crazy for these lively funeral-goers.

And, like these things always do, the video has quickly been turned into a meme.

Which basically shows a clip of someone doing something dangerous, stupid, or life-threatening, before quickly jumping to the footage of the infamous pallbearers dancing to a techno beat.

It really is a stroke of genius.

The idea is that anyone who may do something worthy of death, whether it be literally or metaphorically, will be awaited by the dancing pallbearers.

People have been adding the video onto the end of an array of precarious situations...

Including this hideous one, where a man destroys his girlfriend's near-completed jigsaw puzzle. Okay, this guy deserves a visit from the pallbearers.

And they've also become a sinister word of warning.

An African‘Stay at Home’ message with a theme to raise a smile. (If you are familiar with these dancing Ghanaian pa… https://t.co/zRvIDdDDnq
— Rich Blackburn 💙 (@Rich Blackburn 💙)1587745193.0

As the ongoing pandemic rages, Ghana's pallbearers have become the accidental faces of the stay-at-home movement - comedic grim reapers edited into footage of risky lockdown behavior as a warning.

These guys are probably the best thing to happen to 2020...

These guys have confirmed my morbid personality. Find myself laughing hard at all the African Dancing Pallbearer me… https://t.co/K5a5GiH4Pi
— Joakim Gomez (@Joakim Gomez)1585802683.0

But what's the story behind the meme?

Though the videos hold huge entertainment value, many are wondering why exactly these pallbearers dance and prance around at funerals like this. Because, aren't funerals supposed to be sad?

Well, there's actually an interesting story behind their dancing...

This style of pallbearing is actually a common ritual in some Ghanian communities.

In Ghana, people have started to see funerals as an opportunity to celebrate the life of the deceased, rather than mourn it.

And the video we're all familiar with is courtesy of the Nana Otafrija Pall-bearing and Waiting Service.

The company has over 100 pallbearers in employment...

Who all have a vast selection of outfits and dance moves for each individual burial.

And business is booming.

Benjamin Aidoo, the founder of the Nana Otafrija service, began working as a pall-bearer over a decade ago.

And, speaking about his inspiration behind the company, he explained, "In Ghana, you have to be creative to move ahead. So, at first, people were using all black when someone is being buried - Pallbearers wear all black." "So I thought, no, let me add color."

Benjamin had to get creative in order to stand out.

"I decided to add varieties, buy my own suits, buy my own shoes, buy everything. And we started from there, and then I called people to join me."

The company writes all their own choreography...

And Benjamin believes there's always room for improvement. "We always improve on our choreography, on our dancing. We bring in more styles to suit people, for people to know that, yeah, these pallbearers are unique in their display."

But, despite the individuality of Benjamin's service, there's always room for competition.

In the last couple of years, demand for this type of send-off has been growing across communities in Ghana, and so has Benjamin's competition, which only makes us wonder...

When will the trend hit the U.S?!

Okay, maybe I'm being a little optimistic. But it is amazing to see such a unique send-off, and great to see smiles on the faces of those who are grieving. For more on the crazy world of internet memes, keep scrolling to read about what the woman behind the iconic "crazy girlfriend" meme is up to these days...