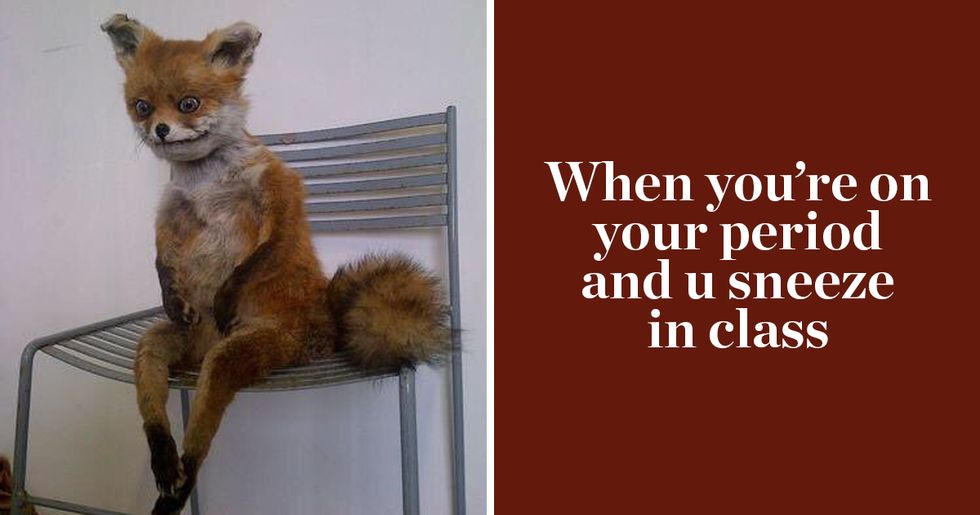 If you get a period every month, you are automatically sorted into the special class of warrior humans who reside on this Earth– that is a fact. Periods are simultaneously the worst natural occurrences, and a complete miracle at the same time. I know, I don't make the rules; I just reluctantly abide by them.

There is so much that goes along with having a period. PMS is real, and it can be severe. First, come the emotions, then crying, then blacking out and waking up amongst several empty pints of Ben & Jerry's. Oh, and then there's the actual bleeding part of it.

There are endless choices when it comes to pads and tampons and birth control, and they all have the horrifyingly unrealistic commercials featuring footloose and fancy-free women to go with them. Periods often also come with a myriad of disastrous side effects! It sucks having a period! Here are some tweets to ease the pain of having a period.

If you get your period, you know this feeling:

Luckily, even on the weirdest, worst days when we're bleeding, we know that at least we're not alone.

"Oh duh, it's PMS, it all makes sense now," she mumbled through chocolate-smeared lips as the house burned behind her.
— Elizabeth Hackett (@Elizabeth Hackett)1447350639.0

This is so true. So often I'll think to myself, "Why is making this turkey sandwich bringing me to tears?!" and then two days later, I'm like, "Oh."

I see lots of tampon brands claiming to be best for being active, but which brand is best for curling up on the couch in fetal position?
— MamaFizzles (@MamaFizzles)1494527673.0

Seriously, who is running a marathon and doing yoga while they have their period? I need to know the best tampon that pairs with lying down on the couch.

This is too realistic. The expression on that fox's face says it all.

When you have to go somewhere

Going somewhere when you have your period? Now, that's a good joke.

Do you remember learning about periods, and how women get them every month? I was so horrified I refused to believe it was true.

I have never seen a group of women unite as instantly as when one of the women needs a tampon but doesn't have one. It's the best interaction ever.

Yes, this seems right. Don't mess with us when we have our periods.

This is so true! You know, I hardly ever think that having a period has an upside, but this is definitely one of them.

This is an accurate tweet! Every emotion gets heightened when you have your period. Not just the "weepies."

Bursting into tears at the worst possible moment

burst into tears at end of cardio class cuz I was overwhelmed by the strength & beauty of the other women so yes ok I may have my period
— Valerie (@Valerie)1494379038.0

This is a good reason to burst into tears on any day of the year– but especially when you have your period. Women are incredible human beings.

When your skin knows all

Ah yes, the hormonal acne! I know it far too well.

Women in tampon commercials are superhuman beings who jump high and exercise and look fabulous all while having their periods. It's terribly unrealistic.

How many times have you been on a date or in a meeting desperately trying to sit up straight and listen– when you really need to curl up in a ball and die? Yeah, me too.

I track my period by my reactions to laughing baby videos on the internet. According to the amount of crying I just did, I'm 4 days away.
— Ijeoma Oluo (@Ijeoma Oluo)1440602574.0

This seems about right! For me, my signs are when I start stuffing my face with everything around me, I'm about three days out.

Raise your hand if you've done this before. I'm sure almost everyone with a period has used their charger or their laptop to soothe period cramps. It will probably give us cancer one day, but the sweet relief is worth it.

This is the picture of feminism! I wonder if Ruth Bader Ginsburg summoned the period or vice versa. I wouldn't be surprised either way.

This is too real. Don't lie. It's happened to every single one of us.

Everything is going to burst

Yes! This feeling. When you're on your period, you feel like one giant zit that is about to pop!

Let this be a lesson to any person who is around someone with their period. Be nice and buy them the things that they want. They deserve it.

This is a fool-proof plan, and it is also why I do not own fancy underwear at all. It will always be ruined.

I don't know if it's gravity or what, but this is the truth. Waterfalls? More like period-falls.

If you think you have a stupid question, just remember NASA engineers once asked Sally Ride if 100 tampons were enough for a 7 day mission.
— SpookySandwich (@SpookySandwich)1416424102.0

Men need to be educated on menstruation the same way that women are. Otherwise, we get NASA professionals who have no concept of how many tampons a woman uses.

Honestly, I don't know how anyone with a period ever wears white jeans. Even when I don't have my period, I just know I'd get them dirty.

Period tracker apps are good for some people, but other people's bodies will let them know. I can relate to this a lot.

There Will Be Blood

Honestly, men and others who don't have periods have to grow up. They're not the ones bleeding out of their vaginas. They need to suck it up.

Checking for your period

going to bathroom to check if your period started even tho you know it hasnt = refreshing your inbox even tho u know theres no new emails
— Hallie Cantor (@Hallie Cantor)1470679668.0

But like, you know that one time that you do check, it will be there, and then you will be totally vindicated!

Jared Kushner looks just like a person who is trying to remember how many tampons he has in his vagina.

I don't know about yours, but my uterus gets really upset once a month when I don't get pregnant. It should know by now that it's not happening. Share this with a fellow period-haver!