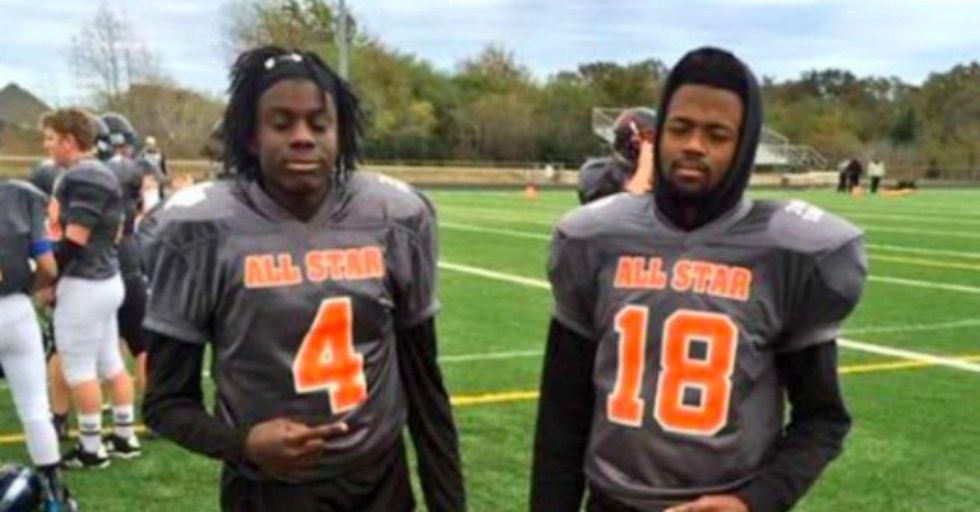 Professional football player Colin Kaepernick decided to take a knee during the national anthem in 2016 as a quiet protest against police brutality and systemic racism. Since then, his cause has exploded.

Thanks in part to Donald Trump's inflammatory comments, #TakeAKnee has gone viral, athletes in all sports are demonstrating their support for the cause, and a national conversation has been ignited.

Now, a couple of high school athletes who decided to join the protest have been kicked off of their football team, fanning the flames of this already fraught discussion.

Once Donald Trump entered the conversation about the NFL protests, it blasted to the forefront of the national conversation.

Trump's misdirection has proven to be quite successful; he's managed to frame these protests, which started before he was elected president, as being about disrespect of the flag, of the national anthem, of our nation's veterans. It is actually about none of those things.

Colin Kaepernick and other athletes who take a knee for the national anthem are protesting police brutality and racism.

While Donald Trump wants them fired, many understand that they are exercising their right to free speech. It's the first amendment of the Constitution, and it's a fundamental tenet of our democracy.

Some have responded by burning their NFL gear and boycotting the league for not firing players who protest. Others, including high school students around the country, have joined the protest.

It's an exceedingly brave thing to do for these student athletes to kneel for the national anthem considering how many people, including the president, are offended that protesters seem to be "disrespecting" the flag.

Often, students who #TakeAKnee are the only ones on their team to protest.

They risk being ostracized by their teammates, team parents, and even their own coaches. It's clear that there's not overwhelming support for these courageous young people who are standing up (or kneeling down) for what's right.

Sometimes, even school administrations take the side of Donald Trump and threaten any student who dares to protest.

This note from the principal of Parkway High School in Louisiana makes it clear that any student who does not stand for the national anthem will face "loss of playing time and/or participation... Continued failure to comply will result in removal from the team." Recently, in Texas, two players were immediately removed from their high school football team because they protested...

Cedric Ingram-Lewis and Larry McCullough were kicked off the high school football team at Victory and Praise Christian Academy in Texas.

According to The Houston Chronicle, Ingram-Lewis raised his fist and his cousin, McCullough, knelt during the national anthem. Immediately after the anthem ended, coach Ronnie Mitchem told them to remove their uniforms and kicked them off the team.

According to The Houston Chronicle, Mitchem is a "former Marine and pastor who started the church-based football program in Crosby six years ago."

In an interview with The New York Times, Mitchem said that the players' protest "was offensive to people who served in the military." "I've been very patriotic my whole life," he said. "I believe everybody has a right to protest, and I let those guys do their protests. But the rule was, if you did this protest, you wouldn't be on the team." So...he didn't really let them do the protest, did he?

In an interview with The New York Times, Ingram-Lewis said, "We had to get our message across: End racial injustice and the oppression of black people."

Rhonda Brady, Ingram-Lewis' mother, supported her son and nephew's protest and wasn't at all happy with the way it was handled by the coach.

"I'm definitely going to have a conversation because I don't like the way that was handled," she told The Houston Chronicle. "But I don't want them back on the team. A man with integrity and morals and ethics and who truly lives by that wouldn't have done anything like [kick them off the team]."

Coach Mitchem said he believes the kneeling offends people who have fought for this country.

It's the age-old conundrum: If veterans fought to preserve our democracy, to support our freedom of speech, and we use that to protest injustices against a marginalized group, how exactly is that disrespectful? One huge, national organization certainly doesn't see the logic in not allowing high school athletes to protest without consequence...

The ACLU has been an outspoken beacon of support for professional athletes who #TakeAKnee.

We support all who #TakeAKnee to protest racial injustice and police brutality today and always. https://t.co/0nIIqAGIqP
— ACLU (@ACLU)1506875461.0

The Twitter account for the ACLU of Texas tweeted their support of students who choose to protest in the classroom or on the field.

Students don’t forfeit their 1st Amendment rights in the classroom or on the playing field, incl. when they… https://t.co/FyLbwLVF9S
— ACLU of Texas (@ACLU of Texas)1506722713.0

"Students don't forfeit their 1st Amendment rights in the classroom or on the playing field, incl. when they #TakeAKnee," they wrote. Cedric Ingram-Lewis and Larry McCullough were Texas high school athletes who were punished for protesting. What's the ACLU of Texas going to do about it?

Why, they're going to defend their rights, of course.

Have you been threatened by your school for exercising your rights or told you could not? Contact us: https://t.co/Trz9ICkoYf #TakeAKnee
— ACLU of Texas (@ACLU of Texas)1506723609.0