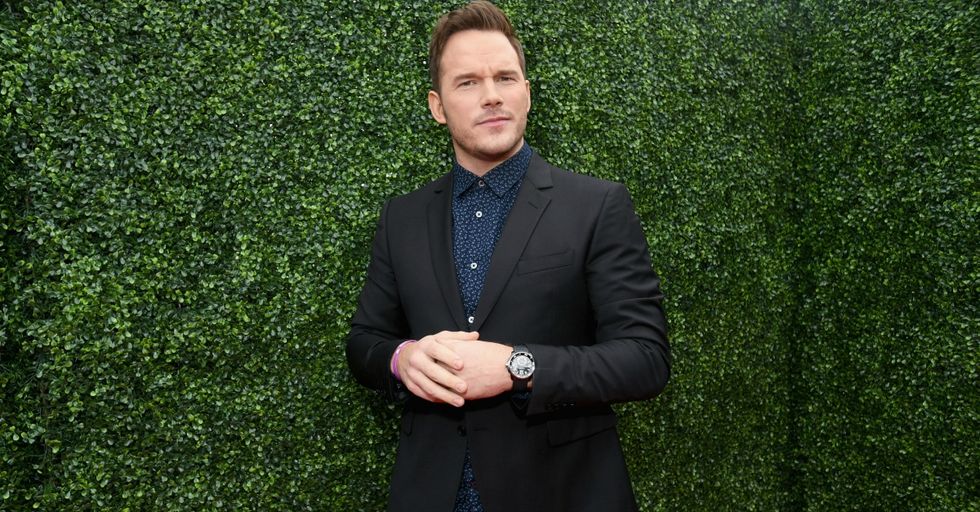 Working in the food service can be one of the most difficult jobs imaginable. You're forced to be on your feet all day, deal with angry customers, grab boiling hot plates, manage a dozen different tables and complicated orders at once and still manage to be pleasant enough to "earn" your tip at the end of a customer's meal. If you've never worked as a server, you simply don't understand how challenging it can be to do this successfully. I was such a terrible waitress that I once dropped an entire serving tray of sodas onto the restaurant's brand-new carpeting and spilled enchilada sauce onto an elderly woman's white blouse all within the same shift. Needless to say, I wasn't a big hit with customers or the restaurant owners.

So when Chris Pratt recently dropped some knowledge about his pre-fame job as a waiter on Instagram, I couldn't relate harder. And thousands of other food servers from across the world couldn't, either.

Chris Pratt is one of those actors that seems like they'd be a blast to grab a beer with.

Sure, now that he's become a big, buff action movie superstar he seems a bit less relatable than he did during his pudgy Andy Dwyer days, but he's still managed to retain that boy-next-door charisma that we're all so drawn to.

Oh, and if you're not following him on social media, you should really get on that.

His Instagram and Twitter accounts are a treasure trove of sweet personal stories, funny quips, and hilarious throwback photos. Like this 2000 pic courtesy of his very first headshot photoshoot, which he accurately dubbed "Douchemaster McChest."

Recently, he posted a photo of himself in a booth at Bubba Gump Shrimp Company.

For those of you unaware of this seafood chain, yes, it was inspired by the classic film Forrest Gump, named after the shrimp company that Forest and Bubba start.

But it was the caption to this photo that really had people talking.

You see, Pratt worked as a server at Bubba Gump back in his 20s, before he was a lovable goof on Parks and Recreation or a sexy superhero in the Guardians of the Galaxy franchise. In the caption, he confessed to something that was received with a somewhat mixed response.

After his customers were finished eating, Pratt would eat the remaining shrimp off their plates.

That's right. The shrimp that were, for one reason or another, not eaten by the customer but were perhaps manhandled in some horrific way unbeknownst to Pratt. Yet he still had no problem wolfing them down.

Now, let's take a moment to think about what it's like being in the foodservice industry.

You make a tiny hourly wage and are forced to rely on tips to pay the bills, so it can be a stressful and demanding job, not to mention all the rude and disgusting customers you're forced to deal with on a daily basis. Can you really blame the guy for stealing a shrimp here and there?

Soon, the responses came rolling in.

And let me tell you, some of them were scarring. Like the story above, for example.

And I thought oysters were unappealing before I read this comment!

Let this story be a teachable moment for any servers who make a habit of eating leftover food scraps. Make sure you know exactly where they've been before putting them in your mouth. (Because they might have been in someone else's.)

Luckily, not all comments were as vomit-inducing.

One woman recalled a time when she visited the movie-themed seafood joint and was lucky enough to have Chris as her server.

She even got his autograph and a pic of the future Hollywood celeb.

So, this means that this woman has the first autograph that Chris Pratt ever signed. That's gotta be worth at least a few hundred bucks, right?

Another person remembered their Pratt serving experience as well.

It's always nice to know that stars are as nice in real like as they seem like they'd be on TV and in movies. And, honestly, it's pretty impressive that fame hasn't managed to change Chris in any way. I'm guessing not many celebs can say the same.

This Chris story is, shall we say, memorable.

So memorable, in fact, that this woman was able to recount the exact month and year of this incident. To be fair, I'd probably remember a 6'2" guy with bleached curly hair stealing the hard-earned shrimp off of my plate and eating it right in front of me, too. That's an image that would stay with you forever.

This person brings up a very valid point.

In fact, I can clearly remember dropping two chicken tenders onto the grimy floor in a restaurant once and then placing them back into my plate to save the waiter some clean-up time. You just never know!

It wasn't long before other people in the service industry began voicing their own opinions.

This person provided his own food-stealing method, which, to be fair, sounds much more hygienic. And believable. So that's why it never seems like I get enough fries!

The idea of treating servers with respect soon became a hot button issue.

This person recounted a time when he received poor service but placed the blame where it belonged-the host-instead of the waitress herself. This is why you can't always blame your server if your food is delayed or if it takes 10 minutes to get a soda refill.

And, inevitably, the concept of tipping came up. Many times.

Because Pratt recommended that you tip *at least* 20% on your meal in a restaurant, some people were, for some reason, personally offended by this statement.

Others were quick to agree with Pratt.

This person lives by the belief that "what you get is what you give," and makes an effort to tip well and always be courteous to the waiting staff. And, not surprisingly, they've never had bad service.

This comment had one heck of a twist ending.

The truth is, you never fully know why you're getting bad service. It might be because the kitchen is backed up or your service is simply having an off night.

Because servers rely on their tips, stiffing them can mean the difference between paying rent on time or paying rent late.

Treating your server with respect is a must, no matter how bad your service might be. How would you like it if you just didn't get paid every time you had a bad day at the office?

This guy offers a genius solution.

Brendan Smith later reveals that he's in the service industry himself, and he likes to tip extra to make up for all the non-tippers out there. So, you see? There are good people left in the world.

This Australian offers a unique perspective on the tipping debate.

Considering some servers make roughly $3 per hour, this seems like a much more appealing scenario. But, on the other hand, some servers rake in WAY more than the equivalent of $20 per hour after a particularly good night of tips, so it's all relative.

This person's comment did not go over well. Even after she edited it to clarify her viewpoint.

Once more for the people in the back:

YOU DON'T KNOW WHY YOU'RE GETTING BAD SERVICE IN A RESTAURANT. Don't punish your server for something you're not 100% sure is their fault.

Oh, and if you thought shrimp was the only thing that Chris ate off people's plates as a server, you'd be wrong.

As a guest on the Graham Norton show, Chris told what will now forever be known as the "Steak Story." Intrigued, are we?

This happened while he worked in what he described as a "terrible restaurant" in LA.

The customers were few and far between, and since he was only pulling in around $20 per day, he'd constantly eat for free in the kitchen in order to make ends meet. Once, a 90-year-old woman came into the restaurant and asked Chris for a recommendation.

Well, considering his habit of finishing customer's meals, he recommended one of his favorite items to her:

A 32 oz porterhouse steak, cooked medium rare with mushrooms on the side and mashed potatoes. Sounds pretty good, right?

And remember, this is a tiny, frail, elderly woman.

He brings out the steak and proceeds to hide in the back of the restaurant, watching her eat, and eager to see how much of it he would get after she leaves.

Finally, she says "I can't eat another bite!"

He then proceeds to wolf down the remaining 14 ounces of steak while hidden away in a secret spot in the restaurant.

After finishing the entire plate, he walks back up to the woman and asks if there's anything else she'd like. And what does she say? "A doggy bag for my leftover steak."

So Chris was forced to make up a lie about having already thrown out the steak so the woman wouldn't realize his thievery.

He offered to bring her another steak on the house, and she ended up being so touched by the gesture that she left him a massive tip. But let this be a lesson to you, food servers. Most similar scenarios probably wouldn't end up as positive as in Pratt's case. Now excuse me while I go locate the nearest Bubba Gump Shrimp Company within a 30-mile radius.