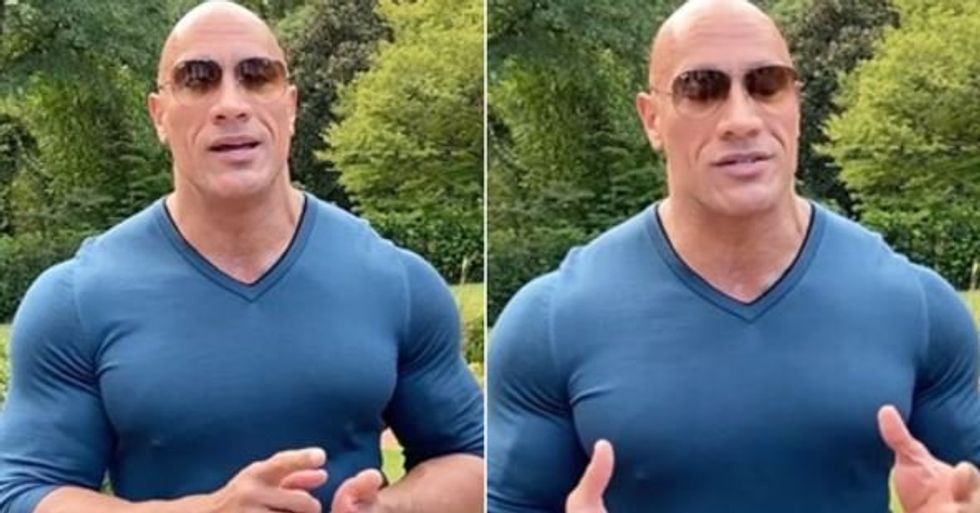 It's been a huge year for Democratic candidate, Joe Biden, and now we're just counting down the days before he takes on Trump in the 2020 Presidential Election.

There's a lot of uncertainty about what will happen. Who will win? Who will lose?

But what's not uncertain anymore - is who Dwayne 'The Rock' Johnson will be supporting come November 3, and it isn't Donald Trump.

It's been one helluva year for Joe Biden.

And it's just a matter of time until he takes on Donald Trump in November's presidential election.

As you will know, this is now Biden's third time running for president.

He previously ran in both 1988 and in 2008, before becoming vice president to Barack Obama.

But, long before reaching one of the highest political offices in the nation, Joe Biden grew up in Scranton, northeast Pennsylvania.

As per Biography, Biden's father, Joseph Biden Sr., worked cleaning furnaces and as a used car salesman, while his mother was Catherine Eugenia "Jean" Finnegan.

Biden credits his parents with instilling "hard work and perseverance" into him.

Biden recalled his father often saying: "Champ, the measure of a man is not how often he is knocked down, but how quickly he gets up."

As a child, Biden struggled with a stutter...

However, he managed to overcome his speech impediment by memorizing passages of poetry and reciting them out loud in front of the mirror.

But, just as his political career seemed to be coming together...

He was struck by a devastating tragedy.

Biden's wife and 3 children were involved in a horrific car accident while out shopping for a Christmas tree.

Heartbreakingly, the accident killed his wife and daughter.

And left both of his sons, Beau and Hunter, severely injured.

Biden later spoke out about how he considered suicide following the fatal car crash.

"I began to understand how despair led people to just cash in; how suicide wasn't just an option but a rational option ... I felt God had played a horrible trick on me, and I was angry."

In spite of the tragedy, Biden decided to continue to represent the people of Delaware in the Senate.

But opted to take the oath of office from his sons' hospital room, instead of the usual swearing-in ceremony.

And Joe hasn't been afraid to poke fun at his opposition on Twitter.

And a while back, one of his comments was hailed as the 'best burn ever'.

@JoeBiden I would be willing to bet my entire fortune that Joe Biden didn't write this or any other tweet.
— Chris Nodimas🍄 (@Chris Nodimas🍄)1596154900.0

But back to politics.

Dwayne The Rock Johnson has been very loud during this campaign.

The Rock isn't scared to speak his mind when it comes to politics, and for a long while many of us thought he was actually going to run for president himself.

And the actor has endorsed Biden to become the next President of the United States.

It's the first time The Rock has endorsed a presidential candidate.

And he did so with an almost eight minute long video, shared to his social media channels. In it, The Rock says:

We are approximately five weeks away from election day - arguably the most critical election day our country has seen in decades. Now, I've got friends in all parties, and the one thing that we can always agree on is the conversation and the dialogue, and where that conversation lands is always the most critical part. This is something that I've certainly not done in the past, so I'm gonna go big.

"I had the opportunity to sit down with Vice President Joe Biden and Senator Kamala Harris to talk about a number of important issues that we're facing as a country."

I thought that it was a great and extremely productive conversation that we had. And as a registered Independent for years now, with centralist ideologies, I do feel that Vice President Biden and Senator Harris are the best choice for our country, and I am endorsing them to become President and Vice President of our United States.

Biden then thanked the actor.

Thank you @TheRock for your support at this critical moment for our nation. You said it best: This election is abo… https://t.co/F1FbQvtWtn
— Joe Biden (@Joe Biden)1601210757.0

In a relatively casual tone, Biden replied to his endorsement saying: 'It means a great deal to us, for real'. For real!