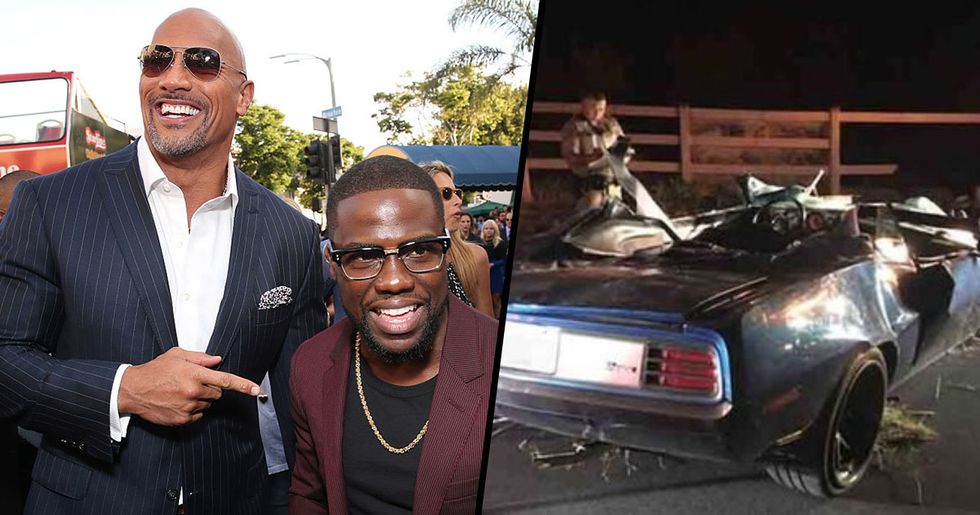 Early this month, comedian and actor, Kevin Hart, was involved in a major road traffic accident and had sustained "serious injuries" as a result.

Hart was scheduled to make an appearance on the premiere episode of Kelly Clarkson's new talk show, The Kelly Clarkson Show, this week, but, due to his injuries, he understandably won't be attending. But, pal, Dwayne "The Rock" Johnson, has cut his honeymoon short to step in for Hart while he recovers from the ordeal.

And he had an update on his friend's condition. Keep scrolling to see what he said...

Though on that dreaded day, Hart wasn't actually driving his car.

While Black's fiance, Rebecca Broxterman, and a personal trainer, was sat in the back.

As they have suffered "major back injuries" as a result of the accident, police have reported. The details about these injuries remain unclear, but many are worried as to whether the men will ever fully recover from such an injury.

Hart was scheduled to make an appearance on the premiere episode of The Kelly Clarkson Show this week.

Following the crash, Hart underwent surgery and is said to be "doing fine." But, understandably, he is unable to attend due to his ordeal.

Pal, Dwayne "The Rock" Johnson, came to the rescue.

The pair starred together in the hit movie, Jumanji.

Johnson decided to cut his honeymoon short to support Hart.

The actor, who recently tied the knot with wife, Lauren Hashian, was on his honeymoon when Hart's tragic crash occurred, but, after hearing about his injuries, cut it short to support his friend.

Johnson stepped in for Hart on the talk show.

Coming to the rescue, the star flew to Los Angeles from his honeymoon in Kauai to attend the show in place of Hart.

During the interview, he spoke about the ordeal.

It seems as if the surgery went well, as Johnson was all smiles throughout the show. He even went as far as poking a little bit of fun at Kevin by referring to him as "his son." He said: "Everything is good, I spoke with Kevin, I actually refer to him as my son."

He also had an update on Hart's health.

"I connected with him today and you know what? These things happen in life and thankfully he was strapped in nicely to his car seat. That's real love..." Everyone laughed at The Rock's jokes about his best friend.

"We spoke the pediatrician and he said he’s doing very well."

Initially, hearing that the injuries were "major" sparked rumors about Hart's spine as well as his recovery time but, now that The Rock has said that he's recovering well, we can now be at ease. We hope he makes a full recovery very soon.