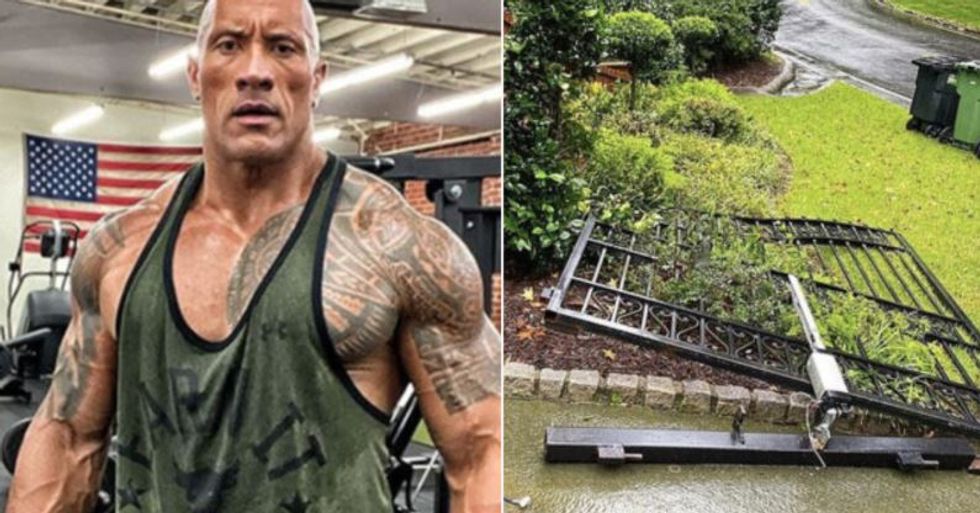 It's hard not to like Dwayne 'The Rock' Johnson. From his humble beginnings, he has risen to be one of the most loved celebrities of all time. And it's not hard to see why...

Now, the star has found his way into the news once again - this time for ripping a metal gate off a brick wall because it wouldn't open.

Dwayne Johnson is a hero.

And if you didn't think so yet - his most recent escapade as a door ripping strong man will definitely change your mind!

The Rock is one of the most beloved celebrities out there.

Yes, even more than Keanu Reeves, who has been a contender for the top spot for a while now.

Well, we'll prove it to you. As well as never backing down from a song request from his daughter, here are another 6 reasons why we just can't get enough of him!

A few weeks back Johnson also opened up about the Black Lives Matter movement.

And, in an 8-minute clip shared to his Instagram, the star directly called out Trump for his lack of compassionate and empowering leadership during these times.

In the video, the star asks Trump one very simple question... Where are you?

"Where is our leader at this time?" he questions. "This time when our country is down on its knees begging, pleading, hurt, angry, frustrated, in pain, begging and pleading with its arms out just wanting to be heard?"

Johnson spoke emotionally during the clip.

"Where is our compassionate leader who is going to step up to our country who's down on its knees and extend a hand and say, you stand up. Stand up with me. Stand up with me, because I got you," Johnson said. "I got you, I hear you, I'm listening to you."

The star also took some time to address the "All Lives Matter" debate...

You can see the video below.

But now Johnson is in the news for a much more light-hearted reason.

The Rock is a big guy.

Perhaps you didn't notice it, but The Rock is a pretty large and muscular fellow - and I'd take a wild guess and say he's fairly strong.

But just how strong is he?

Well he's stronger than a metal gate if this story is anything to go by...

Apparently there was a technical problem with the gate caused by 'severe storms' so The Rock called a technician but they couldn't come round right away.

And by that, he means he literally ripped the gate from the wall. More specifically, The Rock explained:

I pushed, pulled and ripped the gate completely off myself. Tore it out of the brick wall, severed the steel hydraulics and threw it on the grass. My security team was able to meet the gate technician and welders about an hour later — and they were apparently, “in disbelief and equally scared." Not my finest hour, but I had to go to work.

Only The Rock could do this.

I certainly know that I couldn't. I struggle to open my door with the key in my hand most nights.