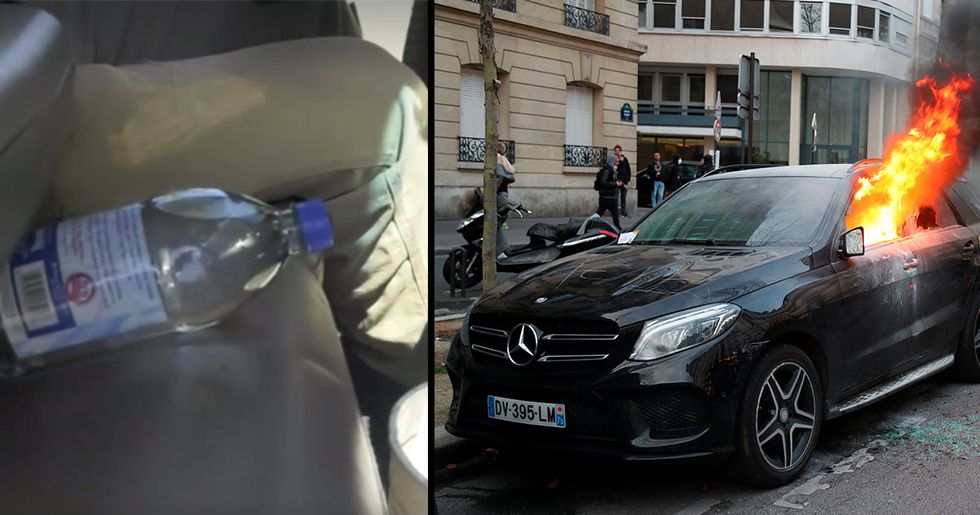 Nothing quite beats a road trip with your pals on a beautiful summer's day. Music blasting out, windows all the way down, wind in your hair... it's the perfect day off. The freedom of driving to... well, wherever you like is just pure bliss; it's no wonder that so many drivers love to take their cars out for the day.

But when it comes to driving long distances, it's super important to stay hydrated, especially on warm days. The beauty of having a car? It's pretty much a mobile storing device, as well as being a vehicle. Stocking up on the bottles of water is essential for road trips, but this is much more dangerous than one would ever expect.

Read on to find out the danger that these water bottles can threaten us with...

Staying hydrated is so important.

Drinking water is essential to our health, yet it's something that is easily discarded in day to day lives. Around seventy-five percent of Americans are dehydrated on a daily basis without even knowing it.

Not all beverages hydrate the body.

Drinking beverages such as iced coffee or energy drinks does not hydrate the body, instead, they pump the body with an overload of caffeine to make us believe that we are indeed hydrated; we, therefore, believe that drinking water is unnecessary.

Dehydration has all kinds of side effects...

Energy levels diminish when the body is dehydrated. You will feel sleepy, concentration levels will drop significantly, and fatigue will hit - hard.

So when it comes to things such as driving...

The majority of drivers carry around bottles of water for their journies...

It pretty much becomes second nature... On a hot day especially, when you're about to embark on a little (or big) drive, a bottle of water is essential.

And they're pretty harmless, too, right?

Wrong! So it turns out that something as simple as a water bottle can be pretty damn dangerous when it comes to driving.

Water bottles are, in fact, a fire hazard.

Trust me, this is the first time that I'm hearing about this too...

A battery technician from the Idaho Power Company first noticed this hazard.

The technician, who is called Dioni Amuchastegui, was on his lunch break in July last year when he noticed smoke rising from beneath his truck.

The smoke was coming from the center console of his truck...

In a video that Idaho Power posted to their Facebook page, Dioni described his initial reaction to seeing the smoke. It turns out that the culprit was a water bottle.

Of course, he was surprised to learn this.

"I looked over and noticed the light was being refracted through a water bottle and starting to catch the seat on fire."

It was a lucky escape.

Dioni was, thankfully, observant enough to notice the smoke before it erupted into a bigger, and more out of control, fire, which is what would have ultimately happened. He was lucky enough to leave with only a car seat branded with two big burns.

Dioni realized what could have happened. He may have escaped with just a burnt seat, but one can only imagine what would have happened if he had left the car unattended for a much longer period of time.

The fire brigade has had a look at the matter.

In a test conducted by Oklahoma's Midwest City Fire Department, it was discovered that sunlight magnified by a water bottle can reach 250 degrees, news channel KFOR reported.

"Acts as a magnifying glass..."

MCFD's David Richardson said, "the sunlight will come through and when [the bottle] filled with liquid, it will act as a magnifying glass as it would with regular optics."

So they can be a pretty risky fire hazard.

"It uses the liquid and the clear material to develop a focused beam and sure enough, it can actually cause a fire or a combustion," Richardson went on to explain.

Given the right kind of plastic and the right environmental conditions...

The fire services have proved that sun shining onto a plastic bottle can cause a fire - and a pretty big one if not caught soon enough.

There are many contributing factors to this kind of fire...

The angle of sunlight, the type of plastic, the flammability of the material, and even how full the bottle of water is, all contribute to the chances of a fire starting.

So what should be done to prevent this from happening?

Despite the chances of these types of fires happening being extremely low, it's better to be safe than sorry. One of the most obvious solutions would be to never leave plastic bottles unattended in a vehicle and swapping the plastic for something much more purposeful that isn't made of plastic.

Word of mouth is vital.

Spreading the word about this hazard to other drivers is vital in preventing the same thing happening, and, even more importantly, it will prevent something one hundred times worse from happening...

It's as simple as that, folks.

Just remember, on warm days, don't leave any plastic bottles lying around in your car. It may take a couple of seconds to remove them, but it's totally worth it to prevent a potentially dangerous fire.