The Science Lesson In This Textbook Tells Children To Do WHAT? | 22 Words 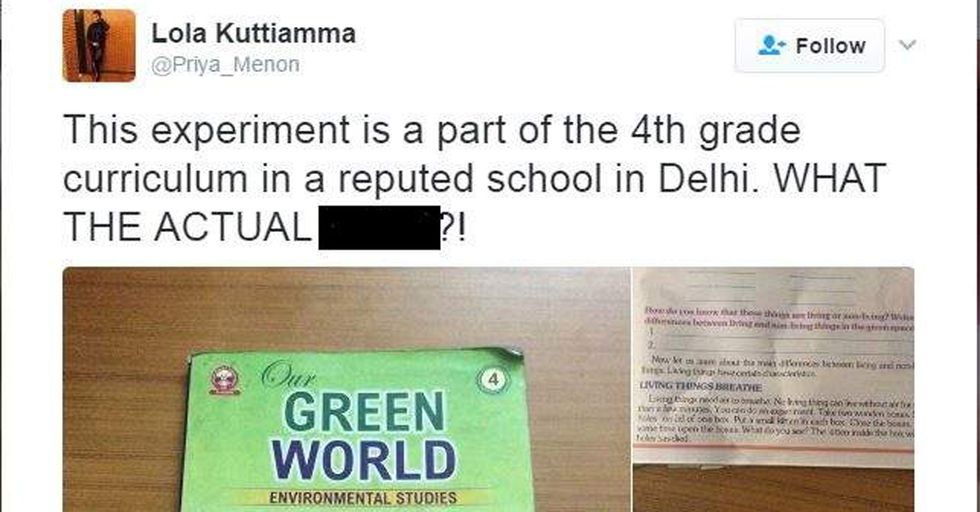 The Science Lesson In This Textbook Tells Children To Do WHAT?

As any parent will tell you, your kids don't have to be in school for very long before they eventually bring home some assignment or project that makes you raise an eyebrow and say, "Wait, whaaaaat?"

But parents and educators in Delhi raised some serious concerns (along with both their eyebrows, I'm guessing, based on how shocked I would be) about an experiment proposed in a fourth-grade environmental studies textbook.

(Disclaimer: The wilds of Twitter are uncensored, so be warned that there's a bit of strong language below.)

Twitter user @Priya_Menon posted photos of the book that contains the experiment in question earlier this month.

According to BBC, this book is "used in hundreds of private schools."

Within its pages, @Priya_Menon found this.

The textbook aims to teach fourth graders about the difference between living and non-living things, and apparently the only way they could think to impart this lesson was by instructing the children to suffocate a kitten. "Take two wooden boxes. Make holes on lid of one box. Put a small kitten in each box. Close the boxes. After some time open the boxes. What do you see? The kitten inside the box without the holes has died." ARE YOU $%&@ KIDDING ME?

If that isn't horrific enough, they follow up with an illustration.

I'm still trying to wrap my head around the fact that such a thing would appear in a psychopath's personal manifesto, let alone a textbook, so I was completely unprepared to see a drawing of a smiling, murdered kitten. Understandably, her tweet set off a firestorm of reactions, from shock and disbelief to outright rage.

Most people were angry, but also baffled at how something like this could possibly pass through an editing process and get published.

And many thought it went beyond any mere editing gaffe.

While still others saw it as a sad sign of the times.

This Twitter user is a teacher, making the point that even the National Council of Educational Research and Training (NCERT), an organization within the government of India, puts out questionable study materials. In this case, propagating what he sees from his own experience as "blatant racial stereotyping."

Most, however, saw no humor in it and called not only for the book to be pulled and the writer fired, but for animal rights groups such as PETA to get involved.

This update was a step in that direction.

In it, @Priya_Menon shares a text update from a friend stating Union Minister for Women and Children Maneka Gandhi, who is also an animal activist, was notified about the situation.

The outcry has reached the publisher, too, and seems to have had the desired effect.

Furthermore, Arpan Sharma, the director of the Federation of Indian Animal Protection Organizations (FIAPO), a collective of animal rights groups in India, contacted the publisher at P.P. Publications and told The Washington Post, “We reached out to them and asked them to remove the illegal (and unethical) content advocating the cruel experiment on kittens, along with a few other points. The publisher has responded back, committing to withdrawal of the book from all the distributors and refraining for selling the existing stock."

It states, in part, their commitment to cease distribution and sales of the book, and that they "will be more careful and serious while publishing anything on pets and animals" in the future. Um, okay, but I can't say I have a lot of confidence in that claim considering the subject line of the letter is "Inappropriate presentation facts on kittens in class 4 textbook." Technically, I guess it is a "fact" that kittens will die if you suffocate them in a box. Still, there's a certain level of sensitivity that I think these guys just aren't getting.