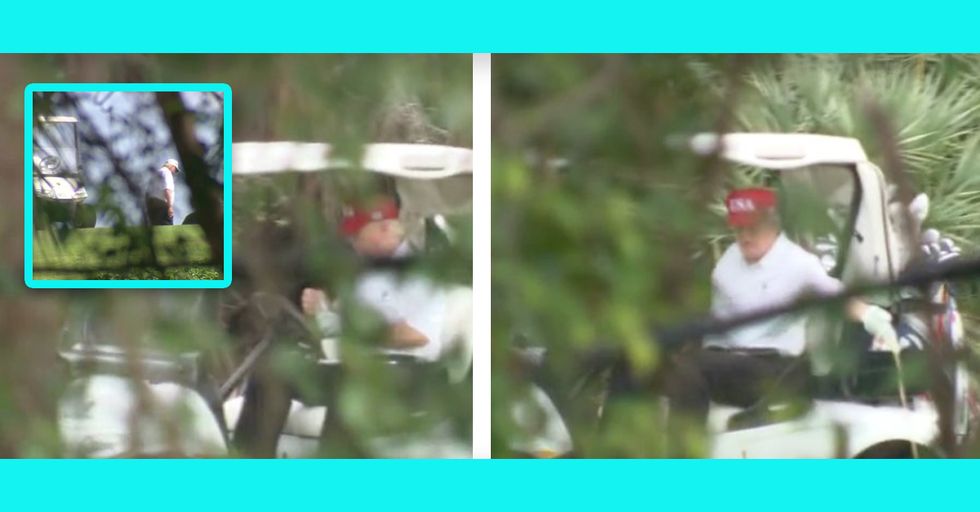 Although he may seem like a pretty gruff individual, there are plenty of things that bring Donald Trump joy. Things like WRITING IN ALL CAPS, giving people weird (and sometimes racist) nicknames, and taking credit for things he had nothing to do with. Oh, and golf. He also really, really likes golf.

So much so that he's spent a considerable amount of time playing the game during his presidency — or at least standing on golf courses looking sad.

The president's golf habit has even apparently caught the eye of the Secret Service.

On Christmas Day, Trump tweeted that he planned on getting "back to work" after the holiday.

He also said that America is becoming greater "faster than anyone anticipated." What does that mean, you ask? Nothing. It means pretty much nothing. But so do most of Donald Trump's tweets.

Anyway, we're looking forward to that whole "getting back to work" thing Trump mentioned. The man clearly takes his vacation time very seriously.

CNN reporter Kevin Liptak shared a few photos of Donald Trump enjoying a game of golf in Florida. As you can see, the photos were taken through the branches of some trees from a public sidewalk.

The next day, Liptak shared additional photos of Trump at the golf course.

President Trump is back on the course today -- this time, spotted emptying a bottle of something onto the grass. https://t.co/St54vtfbjj
— Kevin Liptak (@Kevin Liptak)1514141696.0

These ones showed Trump emptying a bottle of liquid onto the grass. Not exactly hard-hitting news, here, folks. But Liptak's posts were also not especially controversial. He saw the president golfing and decided to share the pictures.

It seems as though Trump wasn't a fan of Liptak's photos, though. Shortly after they were posted, this truck was found:

It's a huge box truck that just happens to perfectly block the view of the golf course. No more golfing pictures for Liptak.

For someone who constantly berates and insults others, it seems like Trump could stand to grow some slightly thicker skin. The U.S. Secret Service eventually had to comment on the truck being there. Their remarks were surprisingly a bit snippy...

"The USSS is in the business of protection and investigations," their statement read.

.@Kevinliptakcnn reports @SecretService saying they did not provide the box truck to block the view of Trump golfing https://t.co/cWv7jtrlC0
— Noah Gray (@Noah Gray)1514403750.0

"...Not in commissioning vehicles to block the media's view of the President golf swing." You know, just in case you had any question about what the Secret Service is actually concerned about.

If you read the statement closely, it basically works out to mean, "The Secret Service has better things to do than make the petty move of hiring a truck to block some reporter's view of the president shirking his duties and working on his golf swing." ...Unlike the president, who apparently considers said golf swing to be his main concern this week.

The Palm Beach County Sherriff's Department also denied having anything to do with the truck:

That leads most of to the conclusion that Donald Trump himself insisted on that truck being brought to the golf course to block reporters from seeing him on the golf course. It's pretty amazing if you think about it. The man simply can't stand being criticized. We could swear there's some relevant expression about glass houses and throwing stones, here...

Trump's (latest) petty move is made all the more hypocritical in light of the fact that he consistently complained about how often Barack Obama golfed while in office.

It's almost too perfect. In case you're wondering, Obama did play quite a bit of golf. 306 rounds of it while he was in office, as a matter of fact. That works out to approximately 38 rounds per year.

Donald Trump, on the other hand...

According to the website Trumpgolfcount.com, the current president has visited golf clubs a total of 84 times so far. (To be fair, the website reports that there's only evidence that he actually played golf during 39 of those 84 visits.) Business Insider reports that Trump has spent more than 25 percent of his presidency at a golf club. We look forward to the time Trump actually does get "back to work."