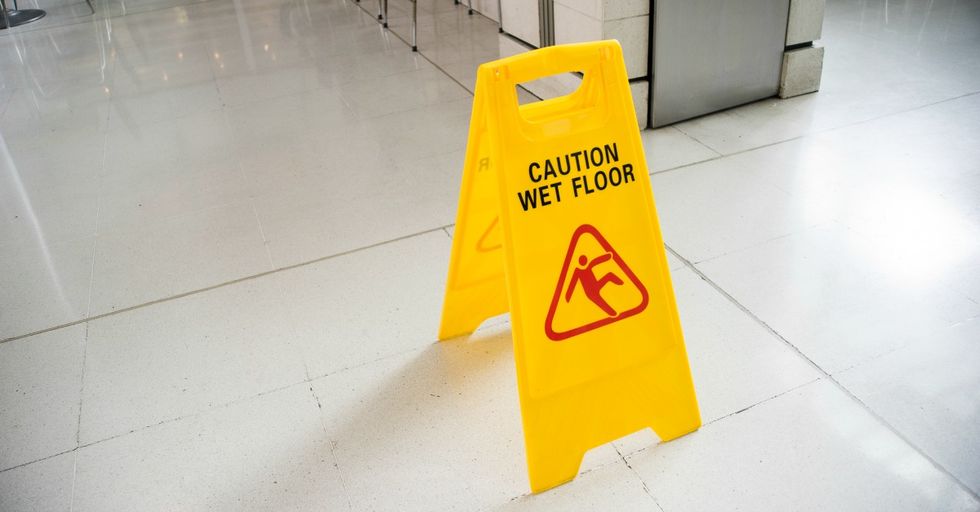 Warning signs exist for a reason. Slippery When Wet, High Voltage, Deer Crossing...these bright yellow signs are put up as a way of preventing accidents that can result in significant injuries and, in worst case scenarios, even death. But what about the common warnings that everyone tells you about but few people actually follow? This could be as simple as not touching a plate after a waitress tells you that it's hot or as important as wearing your seat belt and not touching an electric fence when it's active. (I know, I know...that one sounds stupid. But you'd be amazed how many people refuse to listen to warnings not to do this.)

So what are some warnings that people should listen to but simply refuse to? The following examples of completely avoidable everyday dangers will make you both angry at others for being so reckless and perhaps a bit frustrated with yourself for doing the same.

"Lift with your knees."

"You'll be fine until the one time it's not and your back will give out."-ZhouDa

"Do not walk on black rocks near the ocean."

"Tourists keep dying at Peggy's Cove because they want to get close to the water, no matter how many warning signs there are. People who didn't grow up near water (me) maybe don't know why this is a thing, but living near here for 7 years now I get it. They are black because they are wet, meaning you could be swept away in a matter of seconds."-l23456

"Seriously. Like you could die. People ignore this all the time."-surgerygeek

"People who don't wear seatbelts die, even in slow speed collisions. They get thrown out the windshield or out the side if there is a rollover. The 2nd worst is when a bunch of people pile into a car to be silly and then everyone without a seatbelt dies or is paralyzed. The 1st worst is when someone holds a child instead of placing them on a seat buckled."-type40_2

"Everyone: It can’t be that wet.

"When one of your friends is acting a bit different."

"Make sure the people around you know you're there for them, folks, you could well be saving someones life.

It's okay not to be okay."-HameDollar

"Washing your hands with soap when handling raw meat."

"Many people don't wash their hands before grabbing utensils, or will not clean the cutting board with soap between raw meat and veggies. My ex-roomie would handle meat and open cupboards and touch the dishes with meat juice on her hands. I get that it is a pain in the ass and really the chances of you getting sick from it are low but...

"Tornado warnings or watches in the Midwest."

"It’s like a call for all men aged 15-50 to run outside and look for it instead of heading to the basement. And even outside of those guys, there’s a lot of people that just ignore it and assume it won’t hit them."-Gohomeyurdrunk

"Even though there are dead deer lying along the sides of highways at night, drivers speed on - ignoring the signs.

Perhaps they think it'll be someone else's front end that smashes into the deer, but never theirs."-Back2Bach

"Serious head and spinal injuries because someone dove into the 4-5 foot end of the pool are scarily common. I saw it happen at a weekend trip with college friends. We're drinking at the pool and one guy dives into the 5 foot end and comes up rubbing his head after he knocked it on the bottom of the pool. Within half an hour he's bitching it hurts REALLY bad and he's seeing double. Fortunately some of us were sober enough to realize this could be serious.

He was taken to the ER and diagnosed that night with a very severe concussion and a less serious, but still significant, neck injury."-gambitgrl

"At least SPF 50. I was diagnosed with Stage 1 skin cancer and was lucky that it was caught early. People will actually brag to me that they don’t use or use one with a low SPF."-FashnDiva

"Your gut feeling that something is wrong. It's an evolutionary survival mechanism but too often we ignore it, second guessing ourselves or trying to rationalize it. If you get that feeling, LISTEN TO IT. Your subconscious has likely picked up on things you didn't notice. It can save your life."-CheerFairy

"Those of you who dye your hair, please, please, PLEASE do the 48 hours allergy check with a tiny bit of the dye."

There was a young woman in France whose face and head swelled up and she almost died from her dye job. She had dyed her hair multiple times previously, too. I'll edit this comment in a moment with a source about her."-Dr_who_fan94

"Seriously, those videos of kids tugging on a dog's tail or riding it like a horse are not cute. The whale-eyes, the lip-licking, the flat ears and low, stiff tails, all of them are signs of distress. They're warning you and the child that they're uncomfortable. Yes, the dog is being good and patient with the little human in that moment, but they're begging for someone to intervene because they're upset. When you do nothing, and your dog finally gets pushed too far and snaps, it's not the dog's fault, and it definitely didn't come out of nowhere."-sainttawny

"To be careful on escalators!"

"I work in a department store, so I have seen and heard a lot of terrible stories about them, but I see people taking babies in strollers on them, letting their kids go the wrong way/run on them, and I recently saw an adult man try to push his elderly mother in a wheelchair down one, making her fall out face-first and almost fall down the entire thing. They’re helpful tools, but they can be incredibly dangerous. Make good choices, and use the elevator if needed!"-pgrassman

"If you have any kind of chronic/frequent/recurring headaches, you NEED to get a CT or MRI scan done to rule out the scary stuff."

"A friend of mine never did and the aneurysm killed her. I suffered for years with terrible headaches that were curable. Doctors can be very cavalier about ordering the imaging. It's expensive and people complain that it's "just" a headache. No. It's 'just' a medical bill. Charity and payment plans are usually available. Get it done. I wish I had known to do it years before I did."-notreallylucy

"Guys, if you have a flu and your mum tells you to stay in bed and don't go to work/school then ffs listen to her."

"A friend of mine had a flu, he took some painkillers and continued going to work, partying and hitting the gym. A couple of weeks later (he thought he wasn't ill anymore) he started having heart problems which were caused by that flu. Doctor told him that a large chunk of his heart is inactive and he will always have to look out for himself (yes, till he dies), so basically no alcohol, no weed, no parties, no gym, etc. Dude is only 26. All because of a stupid flu..."-majkkali

“Don’t wander off the trails."

"Seriously people, way too many people end up going missing every year in the woods."-Red_Eight_Zero

"Never eat food that's been out for a few hours or smells off."

"There are common bacteria that can produce potent toxins that won't go away if you re-heat the old food. The toxins will make you very sick and possibly kill you."-ihaveasandwitch

"Holiday heart attacks are a thing."

"An inundation of foods you don't normally eat, lots of stress, it's easy to ignore chest pains or feeling weird because you don't want to ruin the festivities.

You'll ruin them a lot worse if you drop dead."-invisiblebody

"Friend of mine got into a car accident that ended his promising olympic career because he was speeding. Fully recovered (but can no longer compete in his sport), only to speed once more and get into another car accident. He was okay this time, but I'm terrified for the day I get the news that he didn't make it."-princessbyeol

"You don't know how many stomach problems that would have been avoided if you just eat a damn banana and move on with your life." -mousegirl101

"I work at Fantasmic in Walt Disney World and I constantly need to tell people to not walk over the benches to get to the exit."

"Especially when it's wet. On night we had a pregnant woman slip and fall, I don't know what happened to the baby but I hope they are both okay nonetheless."-SqueezySauce

"I just watched a documentary about a quarry flooded with mine run off. People finally stopped getting themselves sick by ignoring the signs when officials dyed the water a disgusting black/greenish color. The quarry had "No Swimming" signs for years."

"Don't walk and stare at your phone at the same time."

"I think we have all seen videos of people walking off cliffs or down manholes."-Over_Cartographer

"I used to rent a room from a friend and she had goats and really really high voltage goat fence."

"I never touched it but she said any man who came on the property did (after very stern warnings not to) and she loved watching them fall apart." -judyclimbs

"As a waitress, I warn my customers that the plates are very hot..."

"...but 77% of them will try moving the plate closer to them."-invertedarsehole

"Tinnitus and early deafness are debilitating and isolating, and are definitely not worth a few years of loud music enjoyment."-havereddit

"No one ever follows this with a hammer or drill. Hammers are hardened steel, if they hit hardened steel fragments can come off at high speeds and impale your eyes and even puncture your leg arteries."-jamesfrancey88