The Surprising Benefits Of Puzzle Solving For Adults | 22 Words 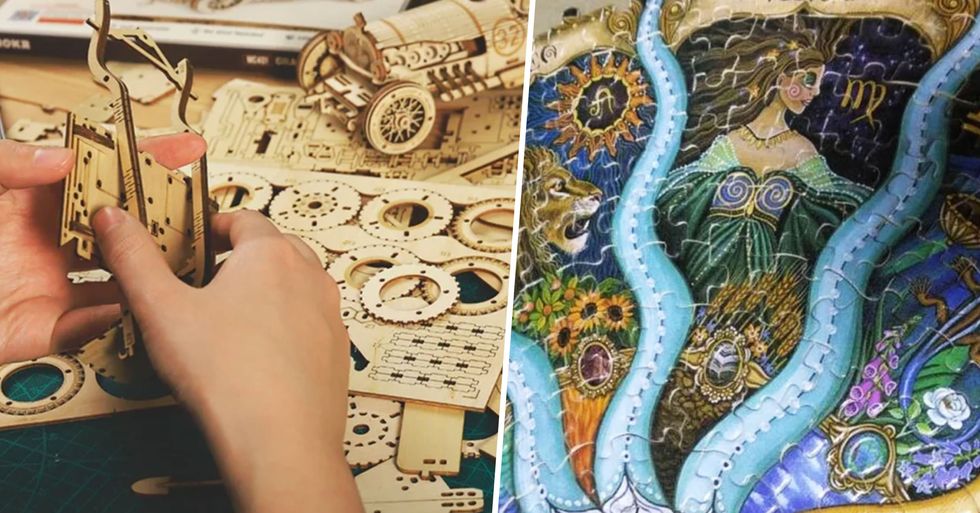 The Surprising Benefits Of Puzzle Solving For Adults

It may come as no surprise to you, but it has been found that jigsaw puzzles and board games hold an array of surprising benefits to our mental health and well-being.

Keep scrolling to read more about these remarkable benefits, and to find out which games could be the most beneficial to you...

In the last few months, our use of puzzles and games has risen considerably.

While we're stuck at home, we have finally grown bored of Netflix and have resorted to the more old fashioned form of entertainment.

Jigsaws and puzzles have made a come-back.

In a desperate bid to end our boredom, many of us have been digging out the dusty old puzzles.

And boy, are we loving it.

Never before have we held so much appreciation for these non-technological forms of entertainment.

And, to make them even better…

They are remarkably good for your mental health and wellbeing.

Puzzles have been proven to hold an array of different benefits...

For both your mental health and your day-to-day activities. Keep scrolling to read about some of the more unexpected benefits these puzzles hold...

Solving puzzles such as chess has been proven to help reinforce the existing connections between our brain cells, but they are especially good for improving short-term memory. Our short-term memory helps us remember shapes and colors and visualize the bigger picture to figure out which pieces will fit together.

Many puzzles, such as 3-dimensional building projects, require us to adopt different approaches to try and solve a problem, considering that there’s a lot of trial and error involved. We also learn the value of formulating theories, testing hypotheses, and changing our perspectives when something doesn’t quite go to plan.

When solving a jigsaw puzzle, we have to look at different pieces and figuring out where they fit within the larger picture - And doing this regularly can help to improve our visual-spatial reasoning.

A researcher from the University of Michigan found that adults could boost their IQ by 4 points after spending just twenty-five minutes a day playing puzzle games such as Connect-4.

They can delay brain syndromes such as dementia and Alzheimer's.

Studies have proven that keeping the mind active through the use of jigsaw puzzles and other problem-solving activities can reduce the amount of brain cell damage that occurs in Alzheimer’s patients. It also supports the growth of new nerve cells and strengthens the connections between them.

Stress levels can be reduced.

The act of solving a puzzle has been proven to significantly lower stress levels... Unless it's a ridiculously complicated color palette jigsaw puzzle. Then you're screwed.

As well as lowering stress, puzzles have also been proven to lift our moods. Puzzles increase our brains’ production of dopamine, which is a neurotransmitter that regulates mood and feelings of optimism. It also affects memory, concentration, and motivation.

When you’re trying to solve a puzzle, especially a jigsaw puzzle with minuscule pieces that all look the same, attention to detail is crucial. You need to train your eyes to pick out the very slight differences in color or shape that will help you put everything together.

When our concentration improves, our productivity naturally skyrockets. The positive effect puzzles have on our concentration are so effective that many offices are actually starting to include jigsaws and other puzzle games in their breakrooms. These puzzles allow employees to take their minds off work for a few minutes and come back refreshed and ready to go.

Much like our productivity levels, jigsaw puzzles have been proven to build collaboration between coworkers, and between children and their parents.  Researchers at Yale University found that giving people the opportunity to solve puzzles at work allowed them to improve relationships and their abilities to cooperate when finishing tasks. For more amazing puzzles, keep scrolling...