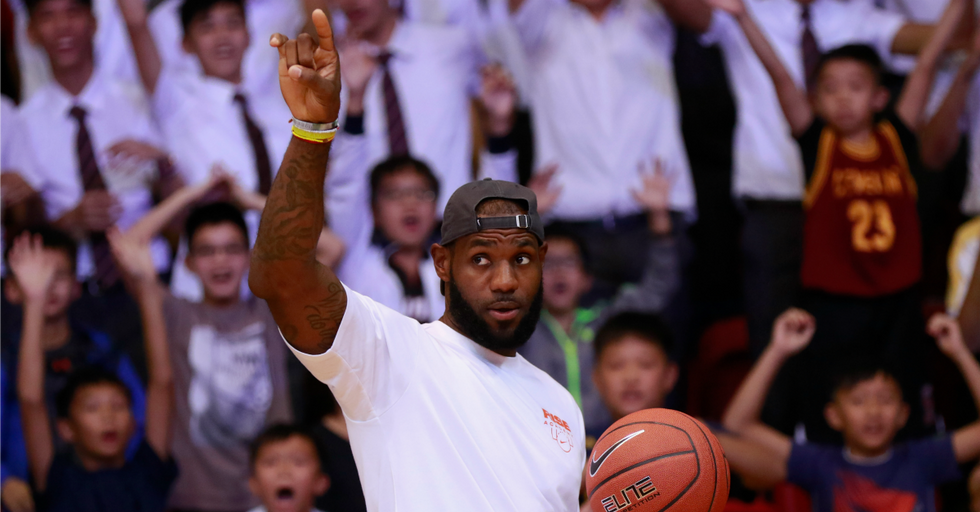 While most famous for his skills on the court, LeBron James has also not been shy about standing up for civil rights. He made headlines a few years ago for wearing a t-shirt in honor of Eric Garner, who was killed by the NYPD earlier that year. Now, he's making waves again, but this time, it's for wearing for a t-shirt he didn't even put on.

A Tweet featuring LeBron James wearing a politically charged shirt was making the rounds on Twitter this week.

The shirt supports the NFL players who have been protesting. It makes a harsh point about how those mad over protests are seemingly not as mad about the countless deaths in the black community that have resulted form police brutality.

This wouldn't have been the first time he's made a statement with his wardrobe.

In 2014, the year Eric Garner died, LeBron wore a shirt that said "I Can't Breathe", which were Garner's last words. Of course, fans who were familiar with the "I Can't Breathe" shirt were quick no notice something off about the new picture that was circulating.

Basically, the photo circulating this week was fake. The new graphic was photoshopped on top of the other shirt.

Twitter was quick to notice that the images were identical to the images of him in the "I Can't Breathe" shirt. The only thing different was the wording on the shirt, which would be easy enough to fake for anyone with decent photoshop skills.

Even Snopes weighed in.

Snopes, the myth-busting website, put the photo to rest definitively by announcing it was in fact faked. Of course, this is the internet, so now that the picture is out it's unlikely everyone who sees it will think to do their homework on it.

Many of the people who originally Tweeted the image have yet to take it down.

If y'all could please stop sharing that photoshopped image of LeBron in that shirt he didn't wear. Let him speak for himself.
— Richard Lawler (@Richard Lawler)1507769554.0

And it's still being shared all across the social media platform. While the image might be promoting civil rights, it's also putting words in LeBron's mouth (or, more accurately, on his shirt). And that's not exactly fair, no matter how good it is for your t-shirt's sales.