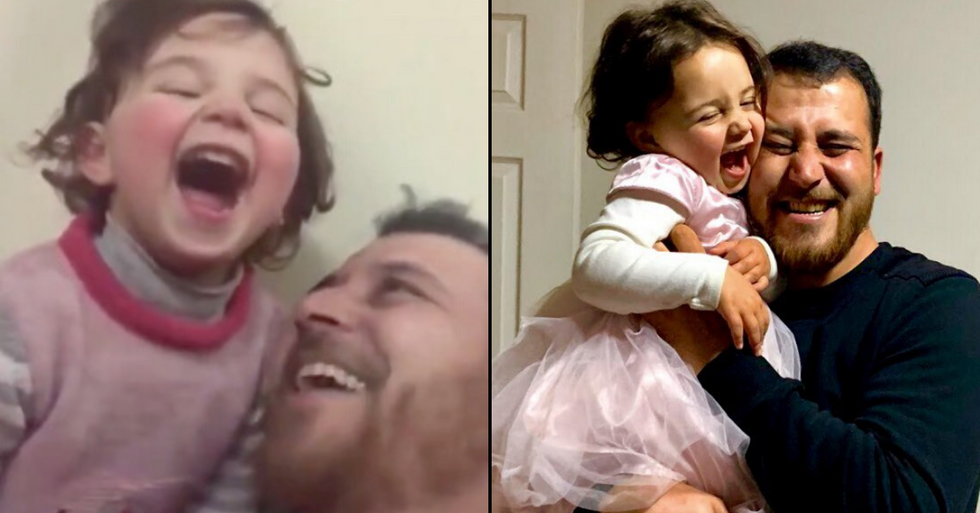 A dad living in a war-stricken area of Syria won the hearts of millions after he filmed his 3-year-old daughter laughing at the sound of nearby exploding bombs.

The footage, which has been quick to go viral, demonstrates the heartbreaking reality of the life people in Syria are being forced to endure, and the devastating effects it will have on all the children involved.

But this week has brought us the amazing news that this little girl has safely reached Turkey.

Syria is in the midst of a civil war.

For the last 8 years, the Middle Eastern country has been enthralled in a brutal war as different groups attempt to take control.

But how did all this conflict begin?

To put a long story short... Before the war began, many Syrians were unhappy with the leadership of their President, Bashar al-Assad.

The protests started out as peaceful...

But the government's retaliation was quick to turn violent, with protestors being gunned down at their own demonstrations.

Many called for President Bashar al-Assad to resign...

But he refused, which only escalated tensions further.

And there were still Syrians who supported Bashar al-Assad...

So, subsequently, they began fighting with those who didn't, thus resulting in the outbreak of the civil war.

The violence was quick to escalate...

And things only got worse when the notorious terror group, the so-called Islamic State (IS), joined rebel fighters in the battle against Bashar al-Assad.

The country, which was once so beautiful and peaceful, has been left completely unrecognizable.

And debris, bodies, and military personnel now litter the streets where civilians once so happily lived.

It is these civilians who are suffering the most.

Hundreds of thousands of innocent people have been forced to live amongst the horrifying violence of the war.

And, as a result of this destruction...

Many Syrians have no choice but to live in total squalor in refugee camps.

And many of these are children.

One of the more heartbreaking realities of this war is that there are millions of children living amongst the violence.

Many of Syria's children have had their childhoods stolen.

Save The Children have reported that at least 2.5 million children have had to flee their homes and are now internally displaced, living in terrible conditions with no access to basic healthcare and education.

The lives in which these children lead are completely unimaginable.

Raining bombs and gunfire from warplanes and military tanks are simply a part of daily life for these children now. We can't even begin to comprehend the terror these children experience on a day-t0-day basis.

But one parent has seemingly found some sort of solution.

Abdullah Al-Mohammad and his 3-year-old daughter, Salwa, went viral on Twitter last month after he filmed his method of comforting Salwa during explosions.

The family was forced to flee their home in Saraqib as a result of the war...

And are now living at a friend's house in a town called Sarmada, where they are still surrounded by consistent gunfire and exploding bombs.

It's a dire situation for them all.

But, determined to protect Salwa from the "psychological crisis" that he has seen other children in the community suffer through, Abdullah came up with an inventive way of keeping her spirits high.

He decided to turn the sound of gunfire and explosions into a "game".

"I decided to teach Salwa this game to prevent her psychological state from collapsing." Mr. Al-Mohammad told Sky News. Every time a bomb explodes, he pretends that it is a firework or a toy gun, and they then celebrate the noise together.

He explained that he and his wife wanted to turn the terrifying noises into "a source of happiness" for Salwa.

Because why should she be traumatized in such a way? "She is a child who does not understand war." Her emotional dad explained.

Abdullah filmed himself and Salwa while playing the "game"...

And his daughter can be seen sat next to him as he asks her: "Is that an airplane or a shell?"

And the pair sit and listen for the explosion together, while Abdullah tells her: "We're going to laugh when it drops."

And, when the bomb finally explodes...

Salwa bursts into fits of laughter, while her dad asks her: "It's very funny, right?"

Salwa continues to dissolve into giggles with each explosion...

It's truly a bittersweet watch.

You can see the full video here...

This Syrian father has turned the sound of bombs into a game to comfort his daughter https://t.co/idW2T4Dq2g
— The Independent (@The Independent)1582044436.0

The clip, which Abdullah shared to his Twitter account, has now been shared thousands of times, and he himself has received an outpouring of praise for his initiative. Twitter users were completely broken-hearted by the clip, with many pointing out his "fearful expressions just before he breaks into laughter", while another said, "the laughter of this little angel is much more powerful than the noise of that bomb".

As the weeks have passed since the video was shared...

Many have been expressing concern for the families' well-being, and we have been eager for an update on their safety.

And now, we have finally received an update.

They have found a new home in the city of Antakya...

I am happy to report that 3-year-old Salwa and her parents have made it safely out of Idlib to Turkey. The family m… https://t.co/3IbdrBLu1o
— Bethan McKernan (@Bethan McKernan)1583259383.0

And words cannot express our relief over the family making it to safety together.

This family is extremely lucky...

The majority of citizens have to pay thousands to be smuggled out of the country and dodge the bullets of border guards. Abdullah and his family were invited to Turkey, so their crossing was a smooth and easy one.

The family can now rebuild their lives...

"Now we don’t have to be afraid anymore," Abdullah said to The Guardian, “Salwa has a completely different future." We continue to hope and pray for the people of Syria during this unimaginable time.