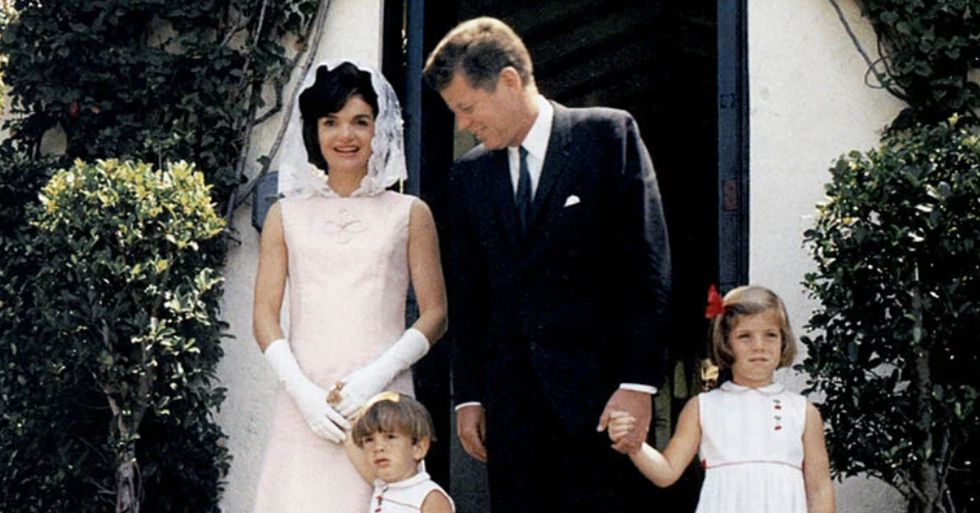 During Tuesday's Democratic National Convention, John Bouvier Kennedy Schlossberg - aka Jack - and his mom Caroline Kennedy, made an appearance.

And, while their appearance was only brief, it certainly stole the spotlight.

And for one reason in particular...

Twenty-seven-year-old Jack is the lone grandson of JFK.

His mom is the only surviving child of JFK and Jacqueline Bouvier Kennedy Onassis.

Of course, we all know the head-spinning history of the Kennedys.

In fact, it has now been branded as the "Kennedy Curse."

It seems pretty impossible for one family to suffer so much tragedy, but when it comes to the Kennedys, they haven't fallen short of premature deaths and scandal.

Probably the most well known is the assassinations of President Kennedy and his brother Robert F. Kennedy in the '60s.

This is just the tip of the iceberg. But the family's history left Caroline as the only living child of JFK and Jackie Kennedy - making Jack the sole grandson.

Caroline is now an American author, attorney, and diplomat.

And she regularly steps out with her son, Jack.

And this week was no exception.

Caroline was joined by Jack to deliver a speech during Tuesday's Democratic National Convention.

The video has since reached social media.

And has made quite an impact, to say the least.

"Sixty years ago in a crowded L.A. stadium, my father accepted the Democratic nomination for president," Caroline began.

"He challenged Americans to look to the future and join him on a journey toward a new frontier."

"It was a call for the young at heart, regardless of age or party. Times have changed, but the themes of my grandfather's speech — courage, unity, and patriotism — are as important today as they were in 1960. Once again, we need a leader who believes America's best days are yet to come. We need Joe Biden."

Jack then chimed in.

"In this election, our future is on the ballot," Jack continued, speaking for the youth of the country. "For my generation, it will define the rest of our lives. We need to tackle climate change. We need to end systemic racial injustice. We need to make health care available for everybody and we need to rebuild an economy that helps working families."

He concluded with this final message.

"We can do this, we can reach these new frontiers, but only with a president who asks what he can do for our country and what together we can do to build a better world," he added."It's up to us, let's get it done."

But it wasn't the pair's words that caught the attention of Twitter...

It was Jack's looks.

The whole of Twitter went into meltdown over how "hot" the twenty-seven-year-old is.

And, after seeing the clip, people really didn't hold back in their comments.

For more on the Kennedys, scroll on to read the twenty cursed facts about the family...