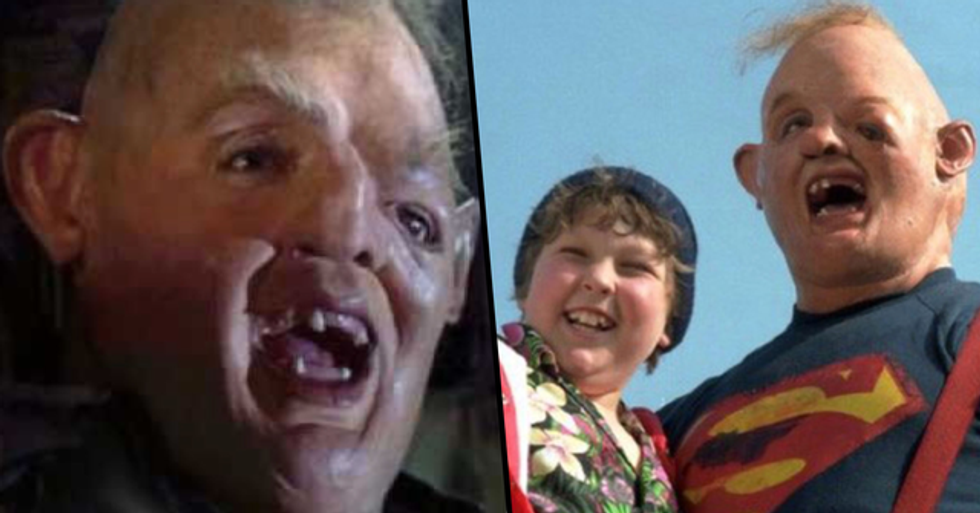 Despite The Goonies being a pinnacle part of most of our childhoods, it turns out that the face behind one of it's most memorable characters lived a truly heartbreaking life...

John Matuszak was the man behind the disfigured face of Sloth.

Matuszak, pictured on the left above, started his career as a football player in Wisconsin.

The Wisconsin native got his first taste of fame in the NFL in 1973...

When he was picked in the draft and joined the Houston Oilers.

He went on to win 2 Superbowl titles as a mountainous defense.

Which would subsequently lead him to bring perhaps one of the most infamous movie characters of the 1980s to life.

Who doesn't recognize this face?

The role of Sloth in The Goonies required an incredible transformation - Matuszak would spend 5 hours having make-up applied every morning.

In the movie, we first meet Sloth chained in a room by the evil Fratelli family...

Being refused food and tortured by Jake's terrible singing.

And, when Chunk is caught and interrogated by the Fratellis...

He is thrown into the same room as Sloth.

At first, Chunk is terrified of Sloth...

And screams out for help upon the sight of his deformed face.

But Chunk soon realizes he has little choice but to befriend the strange-looking man.

Bonding over their shared love of food - Baby Ruths, in particular - the unlikely pair soon strike up a friendship.

Together, they devise a plan to escape.

Sloth and Chunk make their way through the secret cave system, notably stopping by the underground plumbing for the Astoria Country Club. Sloth attempts to fix the plumbing but causes more mayhem on the surface.

Eventually, they reach the Inferno and take to the ship's masts.

Sloth swings down on a rope and saves Stef and Mouth from being pushed overboard, and then begins to fight with his brothers.

With this, Sloth becomes the unlikely hero of the movie.

And, when his brothers and mother are thrown behind bars, Chunk takes it upon himself to have Sloth adopted into his family, with the intent of taking care of him and providing the loving home he deserves.

Who doesn't love a happy ending?

Sloth very quickly became one of the most-loved characters of the movie and, to this day, is certainly the most memorable.

And, of course, he spawned an endless parody of memes and jokes.

Logan is getting like 6 teeth in at once and every time he smiles all I can think of is Sloth from The Goonies. 🤣
— DeAnn Gonzalez (@DeAnn Gonzalez)1600884330.0

I just sneezed and coughed at the same time, I wish I was in the mirror to see my face then cah I know I looked like Sloth from the Goonies
— TribezTino (@TribezTino)1601291628.0

I need cash for the new playstation 5 so thinking on doing only fans but i look like sloth from the goonies so thin… https://t.co/5GJ54nWNlV
— Andrew Barker (@Andrew Barker)1600626878.0

sometimes i look at myself and i’m like wow have i been this cute my whole life other days i feel like sloth from the goonies
— dejana🕊 (@dejana🕊)1600698319.0

Following on from The Goonies...

Matuszak played roles, mostly heavies, and goons, in the likes of The Ice Pirates and Caveman. He also made appearances in Miami Vice, The A-Team, and The Dukes Of Hazzard on the small screen.

But, behind his minor success on movie sets...

It turns out that, behind his bubbly and "larger than life" facade...

Matuszak was actually battling with a grueling drug and alcohol addiction.

It started in his football days.

His addiction to painkillers and other narcotics was brought on by crippling back pain and, according to his teammates, his intake was legendary – he could either make it a night to remember or a night to forget.

His addiction made him violent.

On one occasion, after a playful argument with Raiders' assistant coach, Terry Robiskie, Matuszak slapped his former teammate hard in the face and began shaking him - it took the whole team to prize them apart.

This violence would sadly become a more prominent part of his nature.

“He just couldn’t control himself," said former Raiders employee, Mike Ornstein. “He just couldn’t have one drink. He thought his body was so large, it would absorb it. His drink was triple Crown Royal with a beer backer. The man lived a hard life."

He was also dangerously insecure.

“I don’t know how many times I’ve seen [Matuszak] walk into a bar, grab his shirt with both hands, rip it open to the waist, and growl like a lion at the top of his lungs. That tended to get everyone’s attention," wrote former teammate, Ken Stables.

But, behind the violence, there was simply a man in pain.

On several occasions, Matuszak attempted to get back on the straight and narrow...

But to little avail.

On two separate occasions, he left rehab centers early and fell off the wagon.

“I’ve hit damn near the bottom," he wrote in his autobiography. “I don’t ever want to go back."

Just 4 years after the release of The Goonies, Matuszak died of a drug overdose. He was thirty-eight-years-old.

He left behind his mother and 3 sisters...

All of whom he left his Los Angeles estate to.

An autopsy found fatal amounts of prescription drug propoxyphene in his bloodstream...

Along with trace elements of cocaine and Tylenol.

One other complication that was a factor in his death was that he had an enlarged heart...

Which proved to be too big even for his large frame.

In his death, this turned out to be somewhat ironic...

Because, as anyone who knew him would testify that, despite his struggles, he did indeed have a lot of love to give.

Even though he was hidden behind several layers of prosthetics in his most famous role, the actor will long be remembered. It’s as his young co-stars said: “Goonies never say die."