The Trendiest Name in U.S. History Is Definitely Not What You'd Expect | 22 Words 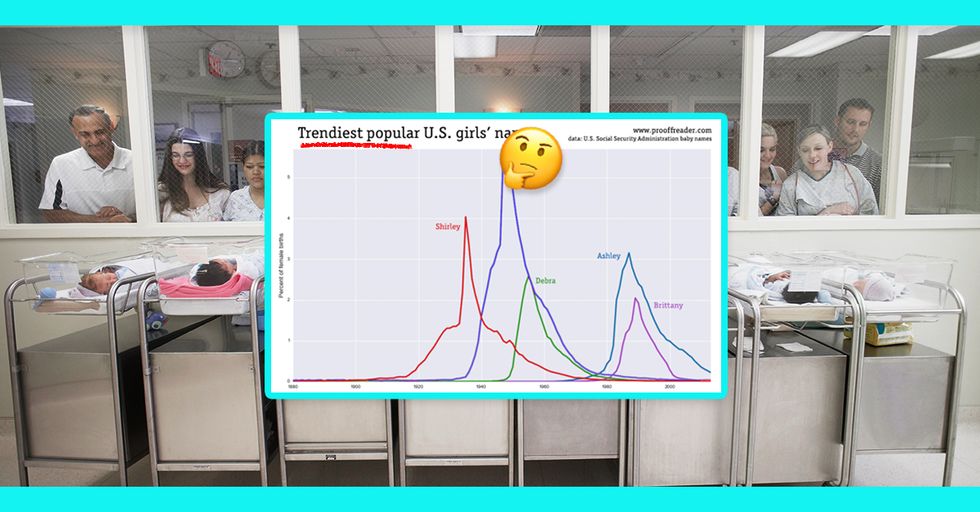 The Trendiest Name in U.S. History Is Definitely Not What You'd Expect

If you've spent any time in elementary schools lately, chances are you know of at least one kid named Olivia. Actually, you probably know at least three Olivias. It's been one of the most popular girl's names for a few years running. Back when you were in elementary school, you probably had a few Laurens, Ashleys, and Jessicas in your class. (Or maybe you were one of those Laurens, forever known solely by your first name and last initial. The struggle was real.)

Every January, the Social Security Administration releases the most popular baby names of the past year. It's super cool to see which names last for decades and which ones fall out of popularity over the years.

However, one master of name analysis has taken things a step further and figured out what the trendiest name in U.S. history is. The answer might surprise you.

Sophia was followed closely by Olivia, Emma, Ava, and Isabella. Nothing surprising here. Sophia has actually been the most popular name for the past eight years, according to the website BabyCenter.com.
Other popular girl's names from last year include Mia, Aria, Riley, Zoe, and Amelia. You probably could have guessed most of those (if not all of them).

Next up were Liam, Noah, Aiden, and Lucas. Biblical names have often been super popular among boys, and 2017 was no different in that regard.
Included in the list of the top 100 boy's names from last year are Adam, Elijah, Michael, Jacob, Benjamin, Matthew, Luke... I could go on, but you get it, right? All your favorite characters from Sunday School can currently be found attending actual Sunday Schools. We've all witnessed baby names trends in real time. Remember when it seemed like every boy baby had a name ending in "en"? (Aiden, Brayden, Cayden, etc.) Names tend to follow certain trends over the years. But the trendiest name in U.S. History? You're never gonna guess it.

Yep. Linda. (Note: I have no idea whether the woman pictured above is actually named Linda, but come on. What else could she possibly be named?) OK. This news has probably come as a bit of a shock to you. You never would have pegged Linda as a "trendy" name, right? Well, it's true, and I can prove it to you with math. Check it out...

This graph was compiled by a guy named David Taylor. He's a biotechnologist and blogger who developed a way to measure a name's "trendiness." Here you can see the name Linda has a gigantic peak when compared to its competitors Shirley, Debra, Ashley, and Brittany:

In his research, Taylor measures a name's "trendiness" by looking at not only its popularity but also how many years the name has been popular. With that metric in mind, it's easy to see that the name Linda spans a pretty wide swath of years (look at how wide the base of its triangle is compared to the other names').

The Linda line also has a very sharp peak which shows the time period in which the name was most popular.

At its peak (in the 1940s), the name Linda was given to 5.67 percent of female babies. In other words, for every 100 babies born, at least five of them were named Linda.

This is definitely a fact you'll want to share with all of your friends' moms.

Or your great aunt. Or both. I'm assuming you know plenty of people named Linda who will find this fact interesting.
And if they ask why the name Linda was so trendy, guess what? There's a very interesting reason for that, too!

The name reached peak popularity in the year 1946 when the song "Linda" was released.

It was written by the musician Jack Lawrence. Lawrence borrowed the song's name from the 1-year-old daughter of his attorney, Lee Eastman (kind of a weird source for a name, but OK). Here's the super interesting part. Linda Eastman grew up to be...

This might be my favorite part of this whole Linda saga. Who would have guessed that a little girl named Linda would not only inspire parents all over the country to make her name the trendiest name ever, but also marry a Beatle?! (Not to mention the fact that she had her own career as a phenomenal photographer!)
Interestingly enough, Linda isn't the only wife-of-a-Beatle who inspired musicians to write songs about her. Pattie Boyd (who was at one point married to George Harrison) was the inspiration behind a ton of your favorite love songs, including "Something," "Layla," and "Wonderful Tonight." The Beatles sure knew how to pick 'em, it seems. And write about 'em.

As for the trendiest boy's name of all time, well, that one might surprise you, too. It's Dewey!

However, the name Dewey was never as popular nor as trendy as Linda. (As you probably would have guessed.) Its peak years of popularity were between 1897 and 1903. Maybe it's time to make a comeback? (Or maybe not...)

BabyCenter.com also shares lists of the most "endangered" names of the year.

It's essentially a list of names that, according to the website, not a single parent has chosen for their baby that year. The top endangered boy's names of 2017 were Carroll, Dick, Homer, Lowell, Roosevelt, Rudolph, and Willard.
As for girl's names, the top endangered ones from 2017 were Bette, Blanche, Irma, Krista, Myrtle, Olga, and Rhonda. You'll notice Linda isn't on this list, so some parents are clearly still keeping the trend alive!