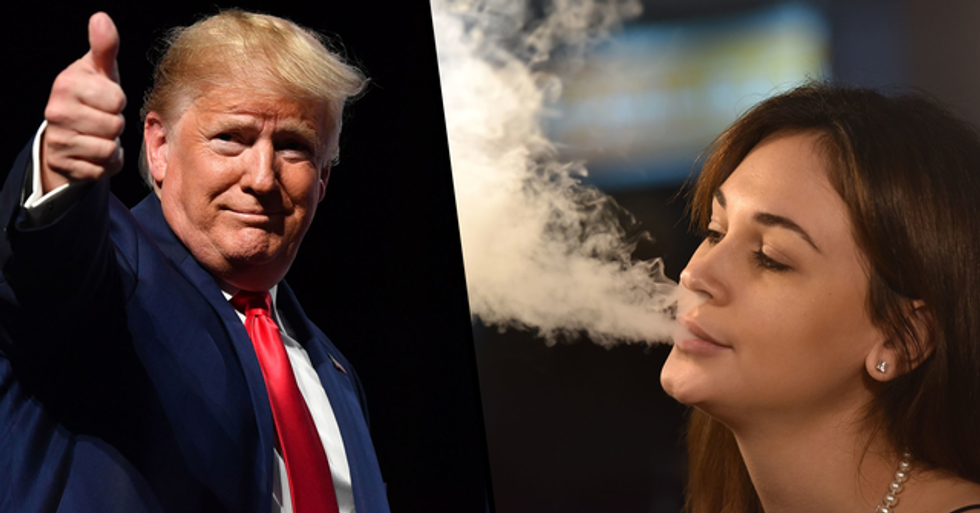 The Trump Administration Has Banned Almost All Flavored Vape Pods

In the latest move in the war against electronic cigarettes, the Trump administration has banned all flavored vaping products.

The move is designed to help mitigate what's being called the youth vaping epidemic, as the fun, candy-like flavors are overwhelmingly used by younger customers.

Read on for all the details on this dramatic move.

The U.S. is facing an epidemic.

Ever since the first electronic cigarette appeared on our shelves back in 2007, the USA has descended into a vaping frenzy.

With the promise of electronic cigarettes being a healthier and cheaper alternative to regular cigarettes, people were quick to throw away their Marlborough Golds in favor of the new and trendier nicotine fix.

The modern device was marketed on the premise of helping people kick their smoking habit altogether, rather than making them more dependent.

And now, a staggering number are hooked.

Roughly 10.8 million American adults are currently using e-cigarettes, and more than half of them are under thirty-five years old, a U.S. study suggested last year. And, in the last few years, the e-cigarettes and vaping industry has skyrocketed to a $2.6 billion industry, the New York Times reported.

And the variety of fun and delicious flavors have made the devices even more appealing.

Because flavors such as strawberry, apple, cotton-candy, and bubblegum are much more enjoyable than the stale aftertaste of cigarette smoke, aren't they?

Yet, despite how enticing they may seem...

E-cigarettes actually have a more sinister side. It has now been discovered that e-cigarettes can be just as harmful as regular cigarettes, if not worse. And, in more recent news, they have been found to be fatal.

For years now, researchers have been investigating the side effects of vaping.

And the evidence has been speaking out against the devices. Researchers have found that e-cigarettes deliver an alarmingly high dose of nicotine, which will get the user inevitably addicted, and therefore more likely to pick up regular smoking. The Food and Drug Administration have even been warning that nicotine-induced seizures could be a rare side effect of vaping.

And nicotine is the least of their worries...

Even without nicotine, research has been suggesting that the flavorings and various other ingredients in e-liquids used for vaping could be linked to serious respiratory problems.

The CDC held a briefing on the rise of severe lung illnesses connected to e-cigarette use and said that the number of reported cases had more than doubled in the last week to 450, from just over 200. The respiratory problems have now impacted residents in thirty-three states and 1 jurisdiction.

The exact cause of this mystery illness is still unknown...

But, the thing that doctors are sure of, is that it is being caused by electronic cigarettes. Health officials and doctors have been unsure of what exactly about e-cigarettes is causing “healthy, young people to become ill," but the CDC said Friday that they are beginning to see trends. Most of the 450 cases involved a young person between eighteen and twenty-five who was initially thought to have a pneumonia-like infection that turned out to be a pulmonary illness.

The number of deaths linked to vaping is now up to 5 as the CDC investigates the 450 cases of severe lung illness reported nationwide. 3 additional deaths were confirmed on Friday in Indiana, Minnesota, and California, following 2 previously reported deaths in Illinois and Oregon.

With more and more American's becoming sick from these devices every day, many feel the government needs to put its foot down and make a change to laws on vaping.

And now the Trump administration has stepped up to the plate.

The Department of Health and Human Services announced on Thursday they were placing a ban on the seemingly ubiquitous "fun" flavored vapes.

This is the most dramatic move in the fight against vaping yet.

And although the vaping industry has claimed a small victory by keeping some of its products legal, it will be an enormous change to the industry overall.

It sets to come into play in thirty days.

The flavored vape ban encompasses the manufacturing, distribution, and sale of flavored vape pods. The only response the vaping industry can have is an extensive appeal process.

Not all vape pods are banned though.

The tobacco and menthol flavors are yet to face administrative action and will remain legal across the board.

The "fun" flavors of vape pods are overwhelmingly used by teenagers and seem to be marketed to appeal to them.

This is the latest in a line of moves designed to target teenage smoking.

Secretary of the HHS, Alex Azar, has released a statement on the new ban.

"By prioritizing enforcement against the products that are most widely used by children, our action today seeks to strike the right public health balance by maintaining e-cigarettes as a potential off-ramp for adults using combustible tobacco while ensuring these products don't provide an on-ramp to nicotine addiction for our youth," he claims.

During the controversies surrounding vaping last fall, President Trump had urged for all flavored e-cigarettes from the shelves with immediate effect.

The increase in teenage vape usage turned many of the public against the habit.

Although it has now been confirmed that the majority of vape-related hospitalizations were as a result of a thickening agent used in THC pods.

Gregory Conley, the president of the American Vaping Association, a pro-vaping advocacy group, classes this as a victory.

"When the ban was announced in September, the conventional wisdom was that there was little hope of stopping it," he's said.

The industry has attempted to fight these regulations at every turn.

This includes a widespread range of protests against vaping bans - which seem to have worked, with Trump seeming to slightly shift his view to prevent voter fallout.

This has led to a less strident ban.

"Millions of vapers and thousands of small business owners fought back and attained at least a partial victory in the process," said Conley.

JUUL has faced the most kickback from the public thanks to its popularity with teens, and therefore removed all of its flavored pods last year. It's the other, smaller vape companies that seem set to make large alterations to their inventory.

Which means it'll be smaller vape businesses who suffer now.

Many industry insiders predict smaller companies will be killed off, while JUUL (which is partially owned by Big Tobacco) seems set to continue to thrive.

Michael Siegel, a professor of community health sciences at Boston University, has also offered his opinion.

"Hopefully, the FDA will rethink its overall approach to tobacco product regulation and announce a more sensible policy—one that regulates products based on their level of risk," he's cautioned.

Small-business owners are worried by the ban.

Many view it as a death sentence for their companies if nothing changes.

Some vape company owners have spoken out.

"I'm pleased that this plan allows my business to remain open for the next four months," said small vape business owner Dylan Vogtman.

"But the PMTA deadline is a ban of its own. The price tag for the application is expensive, and there is no guarantee that it will be accepted or approved."

Want to read more about the health issues which led to the ban? Scroll on for the horrifying story of one teenager whose vaping had nightmarish consequences.