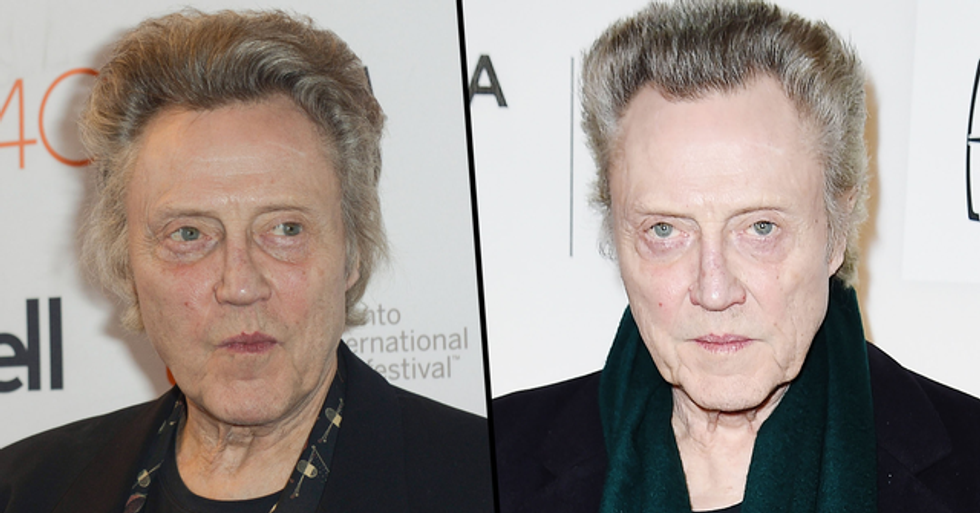 The Truth About Christopher Walken Is Out in the Open Now

One of the most mysterious men in Hollywood sure has a lot of secrets...

If you aren't a movie buff, there's a decent chance you don't know Christopher Walken's work, so let's get an introduction going.

He's been acting for the better part of a century, so you may know the face if not the name. He's turned up in Pulp Fiction, The Deer Hunter, Wedding Crashers, Batman Returns, and Wayne's World 2.

He's made his name with unique look, for sure.

That goes a long way in Hollywood, even if it's not your "typical" leading man's style.

He's also got an intensity that is pretty much unrivaled among his peers.

Don't let that fool you, though.

The man contains multitudes, and one of the faces he wears is that of a very goofy comedy presence.

He's a regular presence on SNL, where he entered the pop-culture lexicon as the "more cowbell" guy.

As long as he's been acting, though, he's also been a first-rate, classically-trained dancer.

Fans may know this, but if you're familiar with his work only casually, you might now realize that he dances a LOT in his roles.

In his films, he specifically requests to have his character dance. Not to show off his moves — well, maybe that — but because he just enjoys it!

While he might not be Tom Cruise, he's an in-demand actor, so Walken gets what Walken wants.

He's danced in so many films that he's even gotten a gig starring in a music video showing his steps.

It's for Fatboy Slim's "Weapon of Choice," and the whole thing is literally Chris Walken dancing in an empty hotel lobby.

Not only does he like to dance, but as a classically-trained performer...he's really good.

So it's really win-win when we get to see him move, because he's not only good but subverting his super-serious routine we know from films.

Yep, it's safe to say Walken is a beloved actor.

But it seems we actually don't know much about the star...

This unexpected quality is just one of the aspects of Walken's career that's turned him into not just a well-known actor, but a full-fledged icon.

Which means he's also a meme! Yep, it's safe to say Walken is beloved by the internet...

Although now I think of it, maybe Pickle has more of a Christopher Walken vibe going on? Must have been overhearin… https://t.co/5djNBU2P6C
— Dean Burnett (@Dean Burnett)1601374119.0

But did you know there's more to Walken than meets the eye?

Let's countdown through some of the biggest secrets you may not know about the star...

Let's start with an obvious one: his voice.

Walken has a super particular way of talking, making him ideal for impersonations.

But how did it come about?

Well, he believes it comes from learning English from people for whom it was a second language.

"People who speak English where they have to hesitate and think of the right word. And I think it rubbed off," he explained to CBS News.

Walken reportedly thinks, reads, and even writes in this distinctive speech pattern, too!

Now, those who know Walken, know him to be an amazing character actor.

But another of his biggest secrets? He never really prepares for a role!

"No matter what character I'm playing, it's me. I'm the only person in my life that I can refer to."

"Things have worked out better than I expected, perhaps because I didn't expect things to be good."

"I really didn't have any aspirations. I'm lazy - I don't chase stuff."

Ok, are you ready to have your mind blown?

Ronald! And friends and family still call him Ronnie.

So why is he known as Christopher?

Well, it was all because of a Belgian cabaret dancer. Of course...

Walken was dancing with her on stage at a club.

Another slightly sinister secret of Walken's?

Well, it's all to do with one of Hollywood's longest-reigning mysteries - the death of actress, Natalie Wood.

Wood was found drowned after a yacht trip near Catalina Island in 1981.

And weirdly enough, alongside her husband and the yacht captain, Walken was also on the yacht at the time...

Walken has stayed stubbornly silent on the tragedy.

He told People it was "a conversation I won't have." The death has been ruled as accidental, but many questions still remain...

Another strange fact about Walken?

He doesn't see himself moving into the world of directing after retiring.

"If I were a director, I'd try to hire the best people I could and then leave them alone."

"They say you don't retire from acting, they retire you," he told The Wrap in 2015. "And I don't want to be retired because what would I do?"

You may have noticed Walken's slick style in the past...

But the source of his clothing may surprise you.

"Whenever I do a movie, all my clothing is from that movie set. They don't give me anything. I steal."

You probably imagined Walken has friends in high places.

But he actually had a secret friendship with a true Hollywood legend.

In fact, Brando once got in touch with Walken to ask him to film a variety show with him. Now that, we'd like to see!

Have you ever wondered why Walken plays the villain so well?

Well, he offered a surprising reason that he's so good at playing bad...

He claims every villain he plays is based on a real-life experience.

"Growing up in New York was like living in a horror museum because there are so many strange people walking the streets and riding the subways," he told Games Radar.

But there are some roles he will not play.

"I have always refused to do something that has offended me. I have been offered potential roles that are totally vulgar," he revealed to The Independent.

And another of his pet peeves?

Walken really hates it when roles are written with him in mind.

"They turn it into what they perceive my personality to be," he explains.

And he even has a name for this much-despised process - Walkenizing.

You could be forgiven for thinking Walken is fearless.

But in reality? He has a list of secret phobias that's incredibly long!

He's afraid of horses and of driving.

And he dislikes people looking the "wrong way" when they cross the street, and that he doesn't even like to leave a hotel room when in the UK.

Walken is also afraid of big crowds of people. Phew.

But in spite of an extensive list of fears?

There's one thing Walken is not afraid of - lions.

One of Walken's teenage jobs was working at the circus as a lion tamer. Of course.

He even had a favorite lion.

"I would come in with my whip and she'd sit up. But she was really more like a dog. She was very sweet. She'd come and bump your leg. Like a house cat," he explained to Indie Wire.

You may think there's no role Walken hasn't done.

But he explained to Vanity Fair that there's one role he's still chasing...

"I haven't played a regular guy."

"You know, a dad with kids. But I'm not sure I'll ever get that part."

We all know that Walken is a talented actor ...

But there's another secret talent the star has, too.

He claims to be great at every cuisine, from Mexican to Thai.

But he chooses to give desserts a miss, claiming he overindulged in the sweet stuff in his childhood.

But all this cooking has a downside.

Walken is extremely conscious of his weight, since he spends his life on camera.

And when he's not shooting, he follows one secret rule to stay slim.

Walken eats just one single meal a day, at 7pm.

Walken's passion for cookery is serious!

He's even been in talks to host a cooking show! "I thought I'd get a couple of those cameras and put them in my kitchen in Connecticut and just, you know, turn it on whenever I felt like it. I thought I would have a hotline — you know, a red telephone. And [viewers] could call and I could give them advice about their love life.  I could provide services like that. Or just talk while I'm cooking."

Now, we all (now) know that Walken is an animal lover.

But did you know he's also an advocate against guns and hunting for sport?

"I've done it a lot in movies, but there are too many guns in the real world."

"I know people with guns, and they always say the same thing. 'If somebody breaks into my house, I have to be able to defend myself.'"

"But what they're really saying is, 'I hope somebody breaks into my house so I can use this thing.'"

"Guns are out of control," he explained.

Want another piece of Walken trivia?

He was the target of one of the most prolific fake Twitter accounts out there.

But iconic Tweets like, "There's a kid on a Pogo stick in front of my house. It's nearly midnight so let's assume he's been drinking. This should end well for him," will go down in history.

And how did people guess the account was fake?

"I can see what is happening. That's the way it is right now, and I don't think there's going to be any turning back," he explained to Men's Journal.

"My wife always says to me, because she had a computer — apparently, you can look yourself up."

"You can do all sorts of masochistic things. I never have that temptation."

And one final secret fact about Walken?

He still thinks of his old stomping ground in Astoria, Queens, as his home.

"[My mother] could never really break with Astoria."

"I'm kind of the same way," he confessed to the New Yorker. Want more celebrity secrets? Scroll on for the heartbreaking life of Mark Ruffalo.