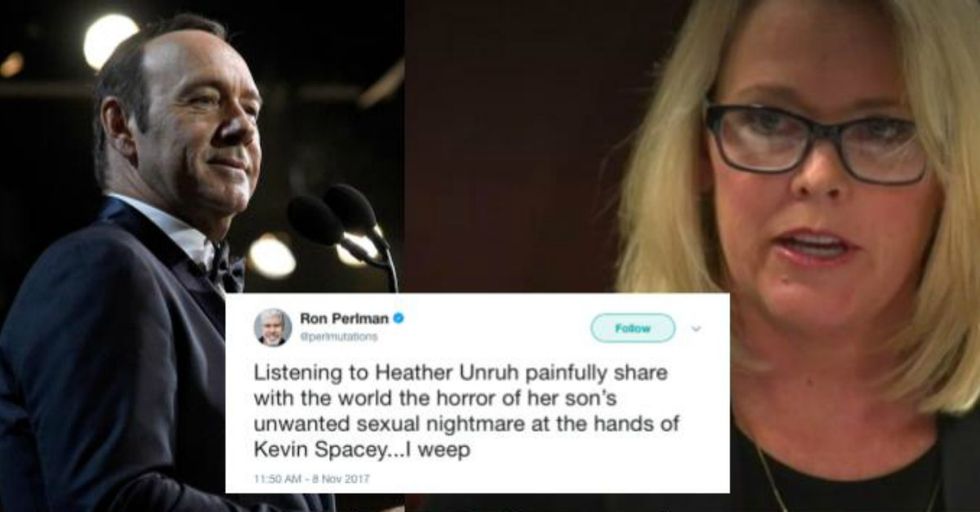 Heather Unruh is used to being on television. The former anchor spent years delivering the local news for Boson's WCVB-TV. Now, she's become part of it. During an emotional news conference with attorney Mitchell Garabedian Wednesday, Unruh alleges that Kevin Spacey, the once-revered actor whose turn as predatory politician Francis Underwood on Netflix's House of Cards netted him numerous accolades, sexually assaulted her son.

The incident happened in July of 2016 when Unruh's son was at the Club Car restaurant in Nantucket.

Her son was eighteen at the time, although he told Spacey otherwise. The actor then plied him with several drinks until he thoroughly inebriated. "My son was not of legal age to drink alcohol," Unruh said. "He told Kevin Spacey that he was of legal age. But whether he was over 21 or not, Kevin Spacey has no right to sexually assault him. There was no consent."

Once her son was drunk, Unruh said, Spacey made his move.

"Spacey stuck his hand inside my son’s pants and grabbed his genitals," she described. "This was completely unexpected. My son’s efforts to shift his body to remove Spacey’s hands were only momentarily successful."

Her son only managed to escape once Spacey went to the bathroom.

Listening to Heather Unruh painfully share with the world the horror of her son’s unwanted sexual nightmare at the… https://t.co/hA6o2lVXr5
— Ron Perlman (@Ron Perlman)1510159850.0

Once the actor was gone, a concerned woman came up to her son and asked if everything was alright. "She told him to run," Unruh said, and her son did. He made his way to his grandmother's house, where he and his sister called her. She came to Nantucket the very next day.

Unruh has a message for Kevin Spacey.

@Zingzangboom @AliVelshi @KevDGrussing Nothing makes me sadder than seeing all of Spacey's victims. Victims who fel… https://t.co/G7a2OFONCn
— Sissie 🐦 (@Sissie 🐦)1510160053.0

"To Kevin Spacey, I want to say this – shame on you for what you did to my son," Unruh said. She further added, "We want to make it clear, this was a criminal act." "The victim, my son, was a starstruck straight 18-year-old young man who had no idea that the famous actor was an alleged sexual predator or that he was about to become his next victim."

Unruh's story is only one in a series of revelations that show a pattern of behavior for the Oscar winner.

He has been accused of assaulting numerous young men, both straight and gay, some of whom were young as 14 years old. Spacey was first accused by Star Trek: Discovery actor Anthony Rapp, who alleges Spacey drunkenly climbed on top of him when he was 14.

Spacey released a statement of apology in response to Rapp's allegation, saying. "I honestly do not remember the encounter, it would have been over 30 years ago."

Spacey also came out, in a move many have described as cynical and preemptive. The allegations against the actor arose in the wake of the Weinstein scandal, which has seen powerful Hollywood producer Harvey Weinstein, as well as several prominent men across different industries, outed as sexual predators.