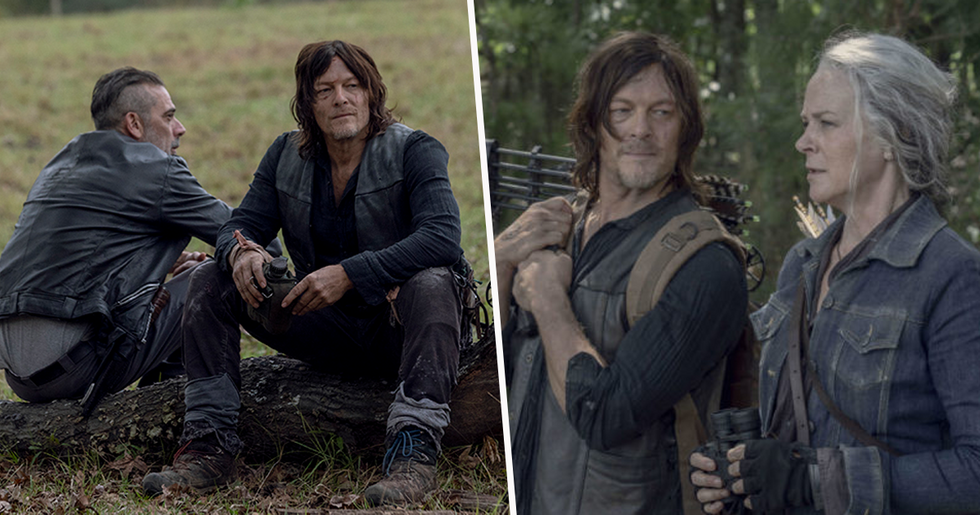 It's been 9 years since the horror-series, The Walking Dead, hit our screens, but, today fans have had some devastating news - the show is officially closing its doors.

Here's everything we know so far, including the release date of the final season.

The post-apocalyptic zombie-themed horror series had us gripped to our screens as we watched a full-blown zombie apocalypse unfold in front of our eyes.

The series is based on the comic book by Robert Kirkman.

The show portrays the weeks and months following a zombie takeover and follows a group of lucky (or unlucky) survivors attempting to stay alive and find secure shelter in a world wherein death could be around any corner.

The group is led by former police officer, Rick Grimes.

The Sherrif, who was shot in the line of duty, wakes from a coma to find out that the world is in the midst of an apocalypse. Imagine waking up to that.

He travels to Georgia to try to find his family.

After eventually reuniting with his wife, Lori, and son, Carl, with the help of best friend, Shane Walsh, he discovers a group of survivors and finds himself taking on the role of leading the group to a safe haven.

But, of course, it isn't all plane sailing.

From the death of Lori to the war against Negan, it's a hard battle to stay alive for the former police officer and his group.

The show went down extremely well with fans.

Rewatching Season 1 of The Walking Dead and man, I still remember why it's my favorite show. Such a good series!!
— TSM TannerSlays (@TSM TannerSlays)1506998426.0

And it had the ratings to show for it, with an estimated 6 million viewers tuning in to watch the first season.

Its profound success also earnt the franchise a spinoff.

In 2015, the show's spinoff, Fear The Walking Dead, hit our screens, and with open arms - the premiere second season was the most-watched thing on Sunday on cable and broadcast.

The zombie franchise has garnered a mammoth fanbase.

Whether its fanfiction, dedicated fan accounts, or simply those eagerly on countdown each year for a new season, there's no doubt that the show has found its niche audience.

The show is also a fan-favorite at Comicon.

The cast are regular attendees at the annual convention, with hundreds of fans, some cosplaying their favorite characters, flocking to the event to watch the panel.

Just like clockwork, each year, fans get a new season of the show, with the saga continuing across a lengthy number of seasons.

The show was recently renewed for a tenth outing.

Despite its dwindling viewing figures, AMC recently released a tenth stint - still believing in its prospects.

At the time, Chief content officer, Scott Gimple, said he believes that it's got even more life left in it.

Gimple, who was a showrunner for the franchise from season 4 to 8, now the chief content officer for the show, believes they can squeeze a staggering twenty more seasons out of the horror show. Woah. That's a lot of episodes.

But, it seems it's not meant to be.

Because fans of the show got some devastating news today.

The show is gearing up to air its eleventh season...

But it seems it will officially be it's last.

Season 11 is set to be super-sized, to give the show the farewell it deserves.

According to reports, the season will be a staggering twenty-four episodes long.

It is unclear whether it will be broken into segments...

"It's been ten years gone by; what lies ahead are 2 more to come and stories and stories to tell beyond that," The Walking Dead Chief Content Officer, Scott Gimple said.

"What’s clear is that this show has been about the living, made by a passionate cast, team of writer/producers, producers, and crew, bringing to life the vision put forth by Robert Kirkman in his brilliant comic — and supported by the best fans in the world."

The show is set to go out with a bang...

"We have a lot of thrilling story left to tell on TWD, and then, this end will be a beginning of more Walking Dead -- brand new stories and characters, familiar faces and places, new voices, and new mythologies. This will be a grand finale that will lead to new premieres. Evolution is upon us. The Walking Dead lives."

So, despite the flagship series ending...

The team has also revealed when the final season will air.

According to ComicBook, the show will start airing the twenty-four-episode run will span the fall of 2021 through to the beginning of 2022.

This certainly marks the end of an era...

If you're looking for a new series to binge to fill that void, we've got you covered. Keep scrolling to reveal the best shows out on Netflix right now.