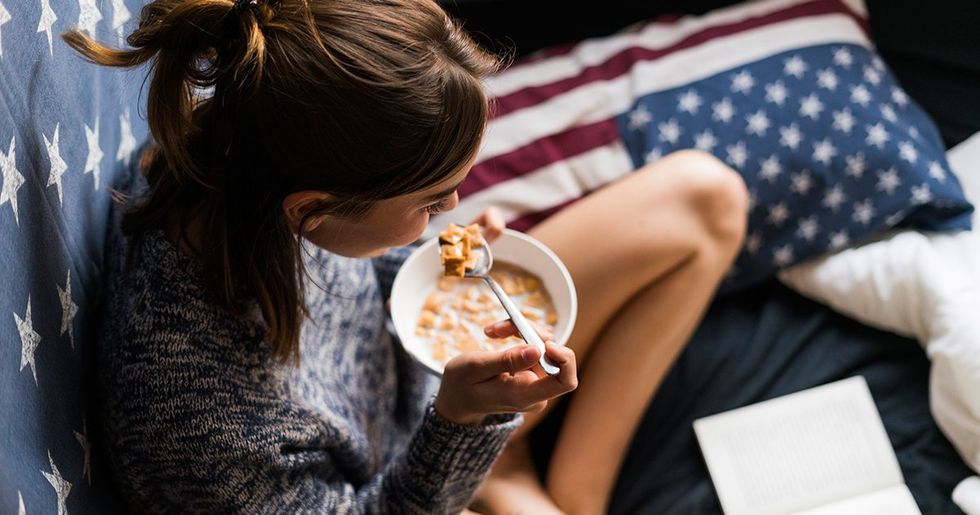 The Weirdest American Eating Habits, According to People Who Don't Live Here

As Americans, we tend not to question our own habits. Because they are so familiar to us, they are "normal." Unless you were allergic, you have probably eaten thousands of peanut butter and jelly sandwiches in your lifetime. You poured sugary cereal for breakfast before school, or you made eggs and toast and maybe even bacon. You might not know how your mom made her famous meatloaf, but you happily gobbled it down for dinner whenever she served it because it was a totally classic dish, and pretty delicious too.

But what people eat and how they eat it differs from country to country, region to region. Some of the things that we took for granted as part of our relationship food growing up are totally foreign and strange to other people. Many just do not understand why we eat the things that we do. And you know what? With many of these questions, they have a point.

If you are American, this plate of food won't look strange to you.

Burger, onion rings, fries... Oh man, I am making myself hungry. But that's not the point of this. The point is that some American eating habits are really confusing to people who didn't grow up here.

Apparently, peanut butter and jelly isn't really a thing in other places. Who knew? I guess if you think about it, it is a strange combination.

Oh, honey. You have stumbled into the great debate. Some people do this. I, personally, find it egregious.

Um, because it's delicious? Carbs on carbs on carbs! You need something to soak up the extra sauce!

Why do Americans eat and praise the worst parts of animals, like chicken wings and ribs?? THEY’RE THE BONIEST, MOST… https://t.co/revpTWVKiZ
— Aleisha Cisneros (@Aleisha Cisneros)1548053731.0

It's so fun to eat meat off the bone with your hands, and also the bone gives it so much flavor! Chicken breasts are dry AF.

Oh, no no no! It's so good. You clearly just haven't had the right tomato soup. Don't deprive yourself of this wonder!

If they're talking about potato chips, YUM. Chips with sandwiches provide a much-needed crunch. If they mean chips as in French fries, who needs an excuse to eat French fries?

I agree that meatloaf isn't one of our most attractive foods, but it's a simple, hearty meal that many people like.

I know. These really shouldn't be eaten for breakfast. They're basically bad versions of pastries. But they are also so good.

Wait...I'm so confused about this. Do other cultures not eat eggs with toast? It's so yummy! Better yet: a breakfast sandwich!

OK, we don't really eat corn dogs on a regular basis. Only if you're like, at a fair or something. But they're so good.

Heck. Yes. For breakfast! Please try cold pizza. Eat a slice while you warm up the rest of the pizza. You won't regret it.

Americans eat so much weird food why do u always mix your sweet and savoury breakfast foods??? Pancakes should not… https://t.co/zXTWT5kyaz
— meg (@meg)1550199948.0

I love doing this because I almost never want an all sweet breakfast or an all savory breakfast. If you haven't dipped bacon in maple syrup, you haven't lived.

Um, because both macaroni and cheese are delicious? Because it's made up of the two best things: pasta and cheese. I could go on.

No. That would be too much bacon. That is not good for you. But at a nice weekend brunch? You bet.

Some do. I don't go for the extra butter, but I understand the urge. I'm more of a salt gal myself.

By scone things do you mean scones? Or biscuits? Either way, the answer is the same: because they are yummy.

Thanksgiving meals look so weird lol why do Americans eat a roast with sweet potatoes and marshmallows?? And Mac and cheese?
— ti (@ti)1542909605.0

I am not a fan of the sweet potato and marshmallow combination, but I do get it. There's a lot of weird stuff on the Thanksgiving table. I will give you that one.

Girl, I am so with you. Unless that salad has like, a bunch of chicken and cheese and bread in it and is actually a sandwich, it's not a meal.

What do you eat applesauce on? I'm so curious. I'm not a big fan of it. I only eat it on latkes at Chanukah.

Here's the thing. We are fully aware that this fake liquid cheese stuff is fake and gross. But it also tastes so good and we would bathe in it if we could.

A lot of TV shows make it look like we're always eating casseroles. This is not true. Casseroles are weird.

If it doesn't go with chocolate or in cakes, how do you eat peanut butter?!?! In my opinion, peanut butter is best when it's paired with something else.

You know, this was a plot by big cereal to sell cereal to kids and claim it was a balanced breakfast. And we fell for it.

I'm with this person. Raw cookie dough is gross, even if it's the kind that doesn't have eggs in it so it's OK to eat.

Hamburgers are delicious, but I agree that their name makes no sense. Unless it's like a bacon burger, I guess.

It's a dressing? Made from buttermilk? And herbs? Other than that, I have no idea. And I'm not a huge fan.

Um, because ice cream makes you happy. End of story. Share this with someone to make them smile!