The WEIRDEST Food Facts About Every State | 22 Words 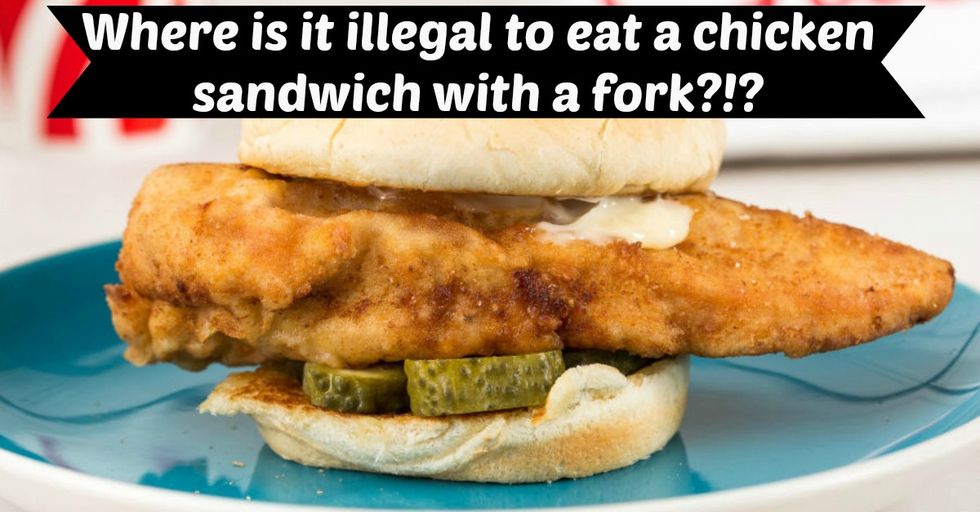 The WEIRDEST Food Facts About Every State

The United States is filled with food, and no matter which state you live in, there's something that can be said about food that's unique to that state.

We're not just talking about saying Georgia has a lot of peaches or that Boston is known for their cream pies.

No, we're talking about the state where it's illegal to fall asleep in a cheese factory or where taking roadkill home for dinner is considered a crime (but honestly, I say let natural selection take over with that one).

So without further ado, here are the United States of Weird or Intriguing Food Facts.

It's illegal to put an ice cream cone in your back pocket. Any monster that would do that instead of savoring the deliciousness that is ice cream — and in a cone, none the less! — deserves to be prosecuted to the highest extent of the law.

No matter how much you want a drink on Election Day — and you know you'll want a drink —you can't sell liquor until all the polls close. At which point you're free to drown your sorrows in any way that see fit. Bottom's up!

When life hands you lemons, you're probably in Arizona, where they're the second top producer of lemons in the U.S. California is the first. Lots of lemonade stands there, friends.

You know the soy-filled crunchy deliciousness that is edamame? There's a good chance it comes from Mulberry, Arkansas, the edamame capital of the U.S.

You probably thought I was going to bring up the lemons thing again, didn't you? Nope, we're talking about how Castroville is the Artichoke Capital of the World and that in 1947, Norma Jean was crowned Castroville's first Artichoke Queen. And if you will remember, Norma Jean went on to become Marilyn Monroe.

The cheeseburger was reportedly invented in Denver by resident Louis Ballast, who owned the Humpty Dumpty Drive-In. You would think he would be doing something with eggs given that name, but I'm not here to tell anyone how to live their life.

"On the good ship, Lollipop..." Now that that's stuck in your head, I'll just throw out the fact that lollipops were first made in New Haven, Connecticut in 1908 by George Smith. "It's a sweet trip to a candy shop..."

In certain parts of Delaware, it's illegal to serve alcohol in an establishment if there's dancing going on at the same time. Which is unfortunate, seeing as most people need alcohol in order to get out and dance.

A Florida man tossed an alligator through a drive-thru window and was charged with "assault with a deadly weapon." Well, maybe next time when he asks for extra ketchup, you'll give him that extra ketchup.

In Gainesville, Georgia, it's illegal to eat a chicken sandwich with a fork. But step just outside the city lines and feel free to get fancy with your fast food consumption. Maybe even pour yourself a cold beer in a wine glass.

Despite what you probably think, macadamia nuts are not actually native to Hawaii — they were brought over from Australia. Lies, Hawaii! YOU SIT ON A THRONE OF LIES!

Think we're talking taters? No, too obvious (but still delicious, none the less). What you probably don't know is that Idaho is the top producer of lentils in America: The Palouse region is known as The Lentil Capital Of The World.

It's illegal for liquor stores to sell milk. It might do a body good, but they think a little vodka might just do it a little bit better.

Le Mars is considered the ice cream capital of the world — and home to Wells Dairy and Blue Bunny ice cream treats. And there probably aren't any weirdos who put ice cream cones in their back pockets. Looking at you, Alabama...

Kansas really is flatter than a pancake: Scientists proved it when they compared the topography of Kansas against that of a pancake from IHOP. Good thing that got cleared up.

You would think fried chicken would be mentioned here, but nope, it's that fact that the residents of the city of Pikeville drink the most Pepsi-Cola. Maybe with their fried chicken.

It is a $500 fine to instruct a pizza delivery man to deliver a pizza to your friend without them knowing. But...but...who wouldn't want delicious pizza? I get that you're sticking your friend with the bill, but pizza equates to happiness. Everyone really wins here.

Strong is the toothpick capital of the world. I'm sure there's some interesting lobster fact somewhere, but dental hygiene is something to be proud of, I guess.

National Bohemian Beer (Natty Boh) was once brewed in Baltimore —and was the first company to issue 6-packs of beer.

Tomatoes may not be used in the production of clam chowder. Don't even think about it, people.

The good folks of Michigan grow 75 percent of the country's cherries. Easy as pie...

In 1961, the blueberry muffin was designated as the Official Muffin of Minnesota. As part of it's duties, it must engage in a minimum of five public speaking events and serve as a beacon of inspiration for the rest of the muffins of Minnesota.

The world's largest pecan nursery is located in Lumberton. (Also, did you know that they're even called pecan "nurseries"?)

In Natchez, it's illegal to give beer or other intoxicants to elephants, which is highly disappointing considered beer goes great with peanuts.

In Billings, Montana, bands who play in clubs where alcohol is served may not leave the stage while performing, no matter how bad they want to go get a drink. YOU WILL STAY ON STAGE AND PLAY FOR YOUR DRUNKEN FANS!

In Lehigh, it's illegal to sell donut holes. In other words, evil people live in Lehigh. Do not recommend. Zero stars.

There is more shrimp consumed in Las Vegas every day (60,000 lbs!) than the rest of the country combined. What is consumed in Vegas, stays in Vegas.

In New Hampshire, you may not tap your feet, nod your head, or in any way keep time to the music in a tavern, restaurant, or cafe. Wow, they seem fun.

With the most diners in the world, New Jersey is often referred to as the Diner Capital of the World. Well, that makes sense.

In Las Cruces, it's illegal to carry a lunchbox down Main Street. I want to know what happened that made this law go on the books. Did someone just go ape crap crazy and start swinging around a metal lunchbox like a major league baseball player? So many questions.

The Big Apple is known for many things, but not many people know the tea bag was first introduced back in 1908 by Thomas Sullivan, a New York tea merchant. Now you're one of the people that does.

North Carolina is the U.S.'s largest producer of sweet potatoes, which are just like regular potatoes except they remember birthdays and anniversaries.

Beer and pretzels can't be served at the same time in any bar or restaurant. Note to self: avoid North Dakota.

The hot dog was created in Ohio in 1900 by Harry M. Stevens, who called it the "dining dog," no doubt trying to make mystery tube meat sound a little bit fancy.

In Oklahoma, it's illegal to take a bite out of someone else's hamburger, which seems like a pretty good rule. Get your own, you munchie moocher (unless I want a bite, in which case all bets are off.)

With more than sixty breweries within Portland's city limits, it has more breweries than any other city in the world. That's a trend you can hop on board with! (See what I did there? "Hop?" I'll show myself out.)

It's illegal to sleep on top of a refrigerator outdoors, in case you're into that sort of thing. Weirdo. Then again, if you want a midnight snack, your commute time is next to nothing.

It's illegal to throw pickle juice on a trolley in Rhode Island. Was that really that much of a problem?

South Carolina is actually the birthplace of BBQ, y'all! Anyone have a few wet wipes?

It's illegal to lie down and fall asleep in a cheese factory. But talk about sweet dreams...

When Teddy Roosevelt visited Tennessee in 1907, he was served Maxwell House coffee and came up with the phrase, "good 'til the last drop." In other words, the last drop just isn't very good.

It's illegal to take more than three sips of beer at a time while standing. So if you see people randomly standing up and sitting down in a bar with a beer in their hand, they're really just following the law of the land.

In Utah, it's illegal not to drink milk, so that's a bummer for the lactose intolerant and vegans.

Vermont loves syrup so much that when McDonald's debuted their Fruit and Maple Oatmeal (not made with real maple syrup), Vermont's Agency of Agriculture took official action to have McDonald's change the item for all twenty-eight Vermont locations to add a tablespoon of pure Vermont maple syrup. That's McDedication.

Technically, it's illegal for children to go trick-or-treating on Halloween. And I suppose they also can't smile when they see puppies or get any presents come holiday time. Wut up, Virginia?

Craving a steak to wind up the weekend? Too bad, buddy, as buying meat (of any kind) on Sundays is illegal.

It's illegal to take roadkill home for dinner, so no skunk fajitas or squirrel stew unless you trap that sucker in your own back yard.

You knew it was going to be cheese, right? Wisconsin is the only state that offers a Master Cheesemaker program, which takes three years to complete. Oh, and you need 10 years of cheese making experience before you can even apply. But if you want to fall asleep in a cheese factory, there's no law against that there.

Don't get caught drunk in a mine or you could face a year of jail time. And if the canary keels over first, just start running. Run! Run like the wind!