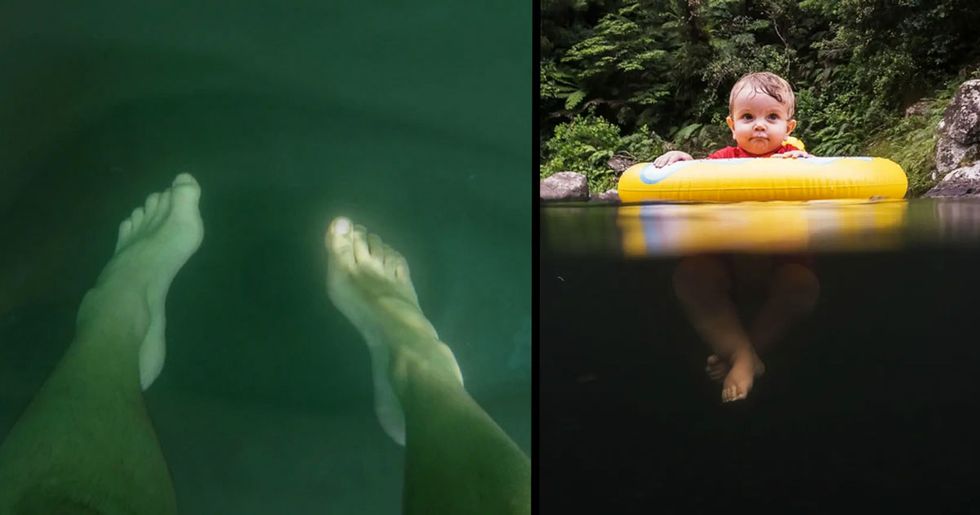 We've all heard of the big phobias: arachnophobia, claustrophobia, agoraphobia. Certain fears make sense: we're afraid of snakes because they're dangerous. We're afraid of heights because we could fall. Fear is what tells you that something is unsafe.

But people are truly weird, and some of us develop fears that are a little less straightforward. Seriously, these fears are physically incapable of hurting you, but some people still run in terror. Our brains can be truly awful at functioning well.

If you thought that fear of little holes was weird, you haven't seen anything yet. If you want to feel a little bit better about your life, take a look at this list and feel grateful that you don't have any of these phobias, because boy, would they make life challenging.

Most phobias are somewhat general: a fear of heights, or fear of bugs. But some people are truly terrified of a very specific situation, like people with arachibutyrophobia. They're afraid of peanut butter sticking to the roof of the mouth. Can you imagine the situation that would lead to this bizarre phobia? Perhaps giving a speech after a peanut butter and jelly sandwich?

Other fears are very specific to today's problems, like nomophobia, which is the fear of being without your phone. Actually...where is my phone? Is it possible that I have a weird phobia and I didn't even know it? That's unnerving.

You might not be a fan of math, but at least you don't have arithmophobia, which is a full-on phobia of numbers. This could be a particularly challenging phobia if you need to count out change, or dial a phone number, or really most things in the world. I wonder if you can get a doctor's note for math class?

This one might seem a bit odd: plutophobia is the fear of money. Sure, having money doesn't seem that stressful, but budgets, taxes, investing, rent...all of those sound pretty stressful indeed. It's not surprising that there are some people whose brains shut down at the thought of any of it.

If you're outside enjoying a beautiful sunny day, but you have xanthophobia, you might find yourself a bit stressed out. That would be fear of the color yellow, so those sunshiney rays wouldn't be quite as comforting. This is definitely a tough fear to avoid: anyone could be wearing yellow at any time.

You probably don't want to get too close to anyone with ablutophobia, as their fear of bathing might give them a certain...smell. I guess if you've watched Psycho one too many times then this phobia makes sense, but it's a pretty important one to overcome quickly.

No, it's not a fear of octopuses, but octophobia does come from the same root word, meaning eight. Why someone would specifically be afraid of one number is still a mystery. If you're afraid of math AND the number eight you're in particular trouble.

Not to be confused with octophobia, OPtophobia has more in common with the ophthalmologist: it's a fear of opening your eyes. Does it count if I just don't want to get out of bed in the morning? It's possible that phobia has more to do with going to work.

If you had a latex allergy then globophobia would make a lot of sense: it's a fear of balloons. Or maybe you've just watched It too many times and simply cannot trust a red balloon. Then again, a sudden balloon pop is enough to scare just about anyone.

In an irony to end all irony, hippopotomonstrosesquippedaliophobia is the fear of long words, making it a cruel joke for people who suffer from it. Definitely avoid the thesaurus if you suffer from this, or at least don’t get too close to any nerds.

Ok, this one might be stretching the definition of "weird" because truly we all get a bit of it as we age: ephebiphobia is the fear of adolescents, who are honestly one of the scariest things out there. What are they doing with their hair and why do they have to use all these new words?

We all have them, but few people really love them: belly buttons. So it's not too surprising that there is a phobia of belly buttons, omphalophobia. I wonder if it comes with an extra phobia of crop tops too? Not the right crowd for a belly button ring.

If you've ever seen an animal swallow a long piece of string and then witnessed it come out the other end, no one would blame you for having linonophobia, or the fear of string. Otherwise it's not totally clear what would lead one to develop this phobia.

After the rise of the hipster style, people with pogonophobia were in bad shape, because their phobia is of beards. But who knows what they're hiding in there? Do they even have chins? And could you even imagine getting lice in a beard? Deep shudder.

If you have vestiphobia you may find yourself in a challenging place when you have to leave the house, because it is the fear of clothing. Unfortunately, you do still have to wear it. Or you could move to a nudist colony: phobias definitely limit life choices.

I'm definitely going to be calling in with ergophobia tomorrow...it's the fear of work. Important clarifying question here: is this just a different word for laziness? Or is it covered under “disabilities" and I can use it to get out of work?

I think it's right to include this one in the list...but I'm not sure. I hate making decisions! I may have decidophobia, or the fear of decision-making. Of all the phobias on this list, it makes the most sense to me: what if you make the wrong choice!

If you have eisoptrophobia you may have no idea what you look like, because you refuse to look in a mirror...the source of your fear. Vampires are especially prone to this one, as not being able to see yourself in the mirror at all is particularly unnerving.

If you hate the sound of chewing, you may end up with deipnophobia, which is a fear of dining with others. Or maybe you just get self-conscious about how you look while eating. Another possibility: you just hate people. Definitely a legitimate concern.

Ok, this one might make a little more sense than many others on the list: taphophobia is the fear of being buried alive. But honestly how often does that come up? Who stays up at night wondering about being buried alive?

People with thalassophobia definitely would not be able to try out scuba diving, as they have a fear of the ocean. There are some scary creatures in there, but on the downside you'd never get to see coral reefs or dolphins or all the other amazing things in the oceans.

Birds can be vicious, which is why it makes sense that alektorophobia is a thing. It's the fear of chickens, who have been known to bite. Plus they're too stupid to be logical, so you never know when they're going to attack.

Nobody LIKES throwing up, but for some people it's more than that: it's a full on phobia. Those people have emetophobia. What if your fear of vomiting gives you nausea...which makes you vomit? A vicious circle.

Urophobia is the fear of urinating.

Life sounds like it would be truly awful if you had urophobia, because everyone has to urinate. Every day. Multiple times. Can you imagine trying to pee while having a panic attack? That’s got to get pretty messy. It’s just not a good combination.

Ok, this one makes absolute perfect sense and I don't just say that because I have it: athazagoraphobia is the fear of forgetting or being forgotten. Don't think too much about the vast swathes of time that will come after your death. It's too scary.

This one seems weird until you look at this gif: chirophobia is the fear of hands, and I've suddenly developed it. Please stop showing me these tiny hands I hate it. New proposal: censorship of all hands on TV please.

If horror movies have taught me anything, it's that dolls, puppets, and other "innocent" objects are evil. So maybe I do have pupaphobia, the fear of puppets. Marionettes are a particular source of evil, and should not be trusted. Ventriloquist dummies are actual devils.

As the era of print journalism dies out, this phobia will probably go with it. Chloephobia is the fear of newspapers, but maybe it doesn't apply if they're digital. Do blogs count as newspapers? Where does the newspaper end when the whole internet has turned into a source of news?

Last but certainly not least is chorophobia, which is the fear of dancing. These people will absolutely not dance like no one is watching. Most likely a social phobia, it's no surprise some people are truly terrified of others seeing them dance.