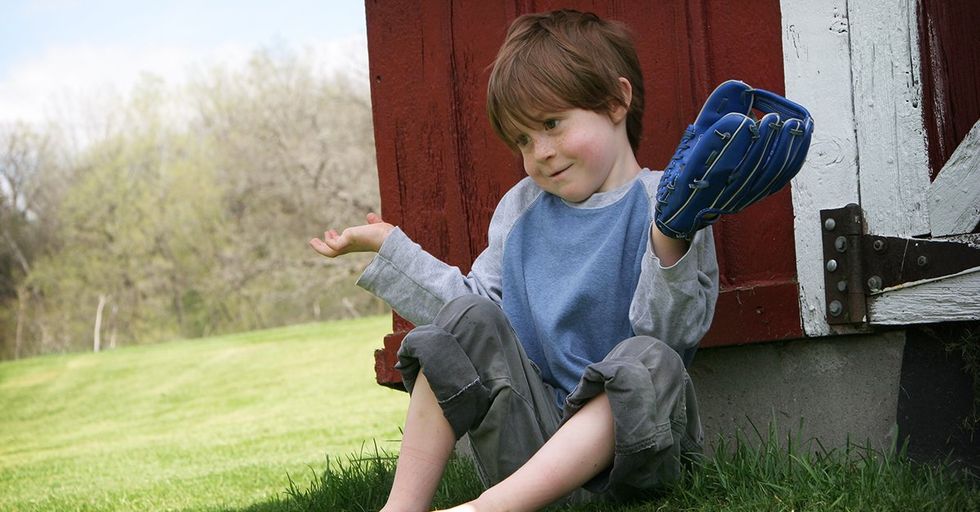 The Weirdest, Most Hilarious Things Kids Have Said to Their Parents

Kids say the darnedest things. In fact, kids say the darnedest things so much that there was an entire TV show dedicated to the silly things kids say. It was called Kids Say the Darnedest Things. Now, because of Twitter, we don't have to wait for a TV show to put on display all the weird, insane things kids say on a daily basis. Their parents can just tweet out their antics at all hours of the day!

And lucky for us, they do. In addition to saying totally random, kind of spooky things that make them seem more adult than they are, kids will just make up information as opposed to admitting that they don't know a certain thing. It is one of the funniest things in the world when a small child, with all the confidence in the world, calls an owl a "wood penguin." Oh yes, that really happened. Read on to find out more of the most bizarre things kids have ever said to their parents.

You have to hand it to kids.

They just keep persevering in the world, even when they fail spectacularly. They're all just trying to figure it out. And they say some ridiculous things along the way.

I've never measured anything in squirrels before, but you know what? It kind of makes sense.

My 5 year old son just asked “what if we put a slice of turkey in the DVD player and it played a movie about the tu… https://t.co/eNqgqyDCDl
— octopus/caveman (@octopus/caveman)1535259390.0

I mean, it's worth a shot, right? If it doesn't work and it ruins your DVD player, you have something to hold over your kid's head forever.

Some kids march to the beat of their own lesson plan. Those are probably the kids who will lead the country someday.

How much do you want to bet the next question was, "Did you pee on the wall?!?!"

Oh my god. But wait, they're toys, so can they die?! This has made me spiral.

I mean, she's not wrong. Sometimes it's nicer just to have bare feet! Let those babies breathe!

"She doesn't have eyes" is maybe one of the most terrifying things a child could whisper in your ear.

What are you sharpening your teeth for, honey? Is it to eat your vegetables even more efficiently? Thought so.

Wood penguin! I love it. I can totally see where he got that name, and honestly, it makes sense to me.

*Overheard conversation between 2nd grade boys* “Do you think you’ll ever fall in love?” “I don’t know. I think if… https://t.co/JPJInqPzxL
— happy hallieween (@happy hallieween)1520638511.0

I love that small boys are having these conversations, and that their answer to falling in love involves a mutual appreciation for pancakes.

Oh man, this is HARSH. Kids do not know how to filter what comes out of their mouths!

It can be easy to forget that kids have only been on the planet for a few years and have to be taught things like the fact that tattoos are permanent.

To be fair, bats do look like insane, otherworldly creatures that could not possibly exist in the real world that we humans live in.

Kids often say really ominous things that make you think they have some sixth sense about what's going to happen. I'd be freaked out if I heard this.

What is the difference, indeed? One is small and hairy and nervous, and well, so is the other.

My new favorite thing in the world is when kids don't know the world for something so they just make it up. I'm not going to teach my kid anything and we'll just see what they come up with.

Love that perseverance...from a toddler. You know, preschool is no picnic. It's a hard world out there.

A kid after my own heart. Halloween is for eating a ton of candy and passing out in bed watching scary movies.

I have declared this many times as an adult, but unfortunately, it doesn't work. People still expect you to do things.

Titus! What a legend. That kid's going places.

Oh no, this kid just started a world war in her own household. Both parents must have had a heart attack.

Wow, that's quite the threat. Guess she really doesn't like those boots. This really is going to be a tough decision for mom.

Man, with this sort of descriptive language, this kid should be a writer! Maybe don't write about poop, though.

Almost 2yr old for sale. Been crying for 10 mins cuz he cant get in the oven with the cornbread. Entertaining all offers.
— Brown Skin Cocoa (@Brown Skin Cocoa)1527717897.0

Ah. Gotta love a kid mad at their parents because they won't let them do something insanely dangerous.

This is such a good excuse, one that I will use every single time I'm caught with icing on my face (which is more than you might think).

If this were a power that human beings had, I would never go anywhere or do anything. I would just summon cookies all day long.

What a specific guess! Share this with a parent who has crazy kids of their own!