What's wrong with the White House Navy Mess, you ask? Well, for one thing, it's a damned mess (see what we did there?) | 22 Words 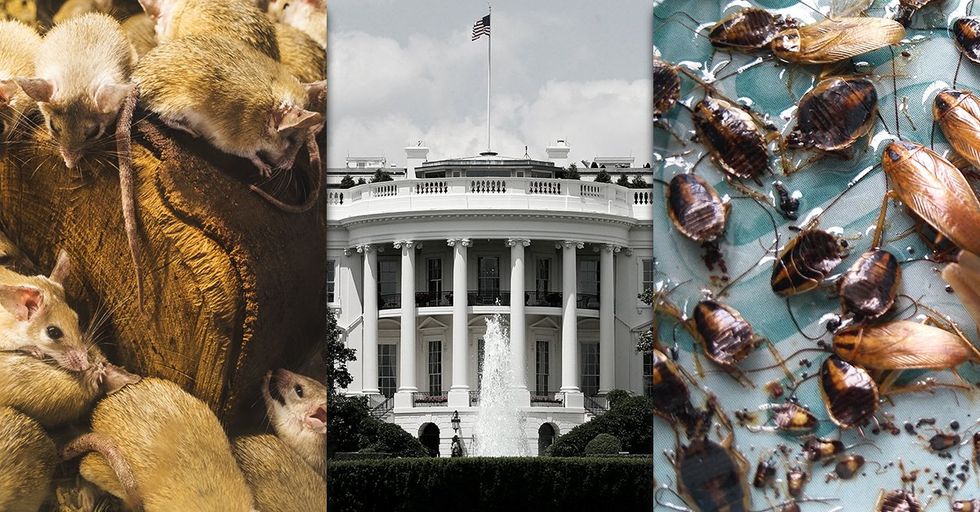 The White House Is Apparently Infested With ACTUAL Vermin

In any horror movie, the first sign of a demonic possession is when the vermin start coming out the cracks. Random spiders run across the table, roaches pour out your burger –a rat gets into the canary cage and almost massacres poor Tweety.

When the toilets start making weird demonic noises and ants make themselves comfortable in the top drawer of your desk (just underneath your favorite copies of Breitbart and the Daily Stormer), oh, that's the point you know you need to call an exorcist to clear out the entire goddamned cesspool.

Staffers at the White House, it seems, are facing this very same dilemma.

After months and months of battling leaks, nuclear threats, and even stray dinosaurs, the poor beleaguered staffers now find themselves faced with an infestation of demonic proportions. And by demonic proportions, we mean actual vermin of the animal kind.

Some people, upon hearing this declaration, have been quick to point out the White House is already infested.

Many have claimed that the venerable address of 1600 Pennsylvania Avenue is a bastion – nay, a stronghold, a veritable fortress – of white supremacy, Nazi apologists and *gasp* Russian sympathizers.

Some naysayers would point to the Mueller investigation currently scourging the White House as proof that our current leadership is in bed cheek and jowl with some very unsavory people.

@realDonaldTrump Need the Special Council Robert Mueller to complete his investigation of the #TrumpCrimeFamily so… https://t.co/HwanIRfTns
— Rodney Wilson (@Rodney Wilson)1510856228.0

Mike Flynn pled guilty to lying to the FBI – proof! Trump retweeted videos from an actual hate group and now the British people (our closest allies) are calling for their government to cancel his upcoming trip and ban him – proof! Trump is supporting Roy Moore – an actual pedophile – in his bid for the Senate – proof! Trump keeps attacking black people and women – proof!

Some people have even taken to pointing to the fact that the "swamp" seems to be expanding further and further every day.

The seat of American democracy has never, in its entire history, been as plagued with plutocrats, oligarchs, and nepotism as it has in this very hour. Ethical watchdogs have wept bitter liberal tears as the unqualified children of privilege have taken position in the highest offices, and plutocrats run amok in the cabinet.

But no, while these naysayers bring up all these extraneous details, we're actually here to talk about actual vermin.

And by vermin, we mean cockroaches – lots and lots of them. Also, mice, and spiders, and ants, cause they're definitely there too.

NBC Washington obtained a list of White House work orders for the past two years, and the details are shocking.

As it turns out, the White House has (several) infestation problems. There were at least four reports of cockroach infestations on the grounds and let's not even talk about the Navy Mess Hall.

What's wrong with the White House Navy Mess, you ask? Well, for one thing, it's a damned mess (see what we did there?)

No, really. There are mice in the Navy Mess food service area. Freaking mice. But then again, at least they aren't rats, so... silver lining?

And no, we're not talking about the way she spins lies so complicated even a spider would lose track. No, it seems that Conway has actual bugs in her office, for which she has requested bug lights.

As for ants, turns out there's lots of them in the Chief of Staff's office.

The creepy crawlers must be getting everywhere because the White House put out an extermination request. It seems all very The Exorcist up in the White House right now, and things seem very dire.

Then again, this isn't the first time the White House has faced an infestation.

@txvoodoo @metaquest This infestation of Trumps and their extended family members will need to be fumigated out of… https://t.co/VoLI7lwnqi
— Lyn Harris (@Lyn Harris)1510199172.0

It is a very old building, after all. As former U.S. General Services Administration (GSA) Inspector General Brian Miller told NBC Washington. "They are old buildings. Any of us who have old houses know old houses need a lot of work."