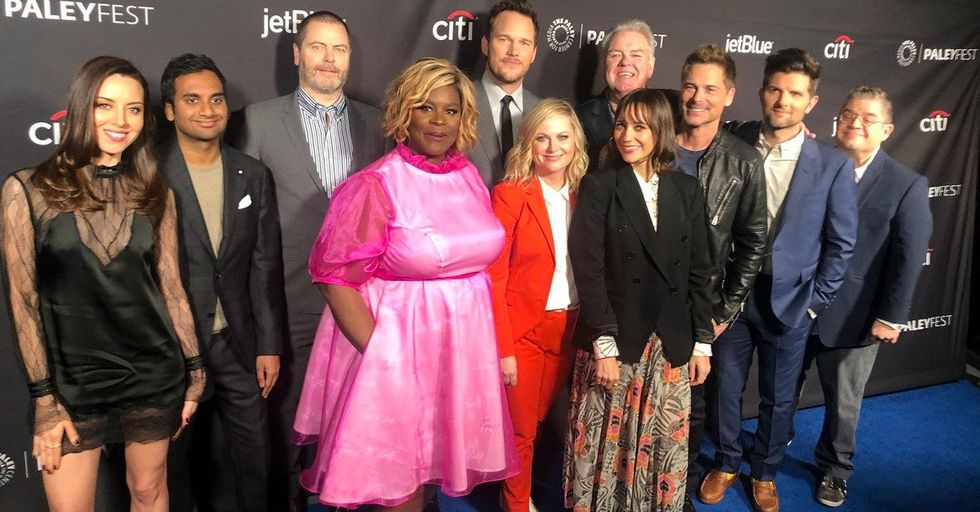 There are certain shows that will forever stand the test of time: I Love Lucy, Seinfeld, The Simpsons, Friends, and, I think it's pretty safe to say, Parks and Recreation. First airing on April 9th and running for seven seasons, Parks and Rec had the perfect combination of smart writing, a stellar ensemble cast, a gripping story arc, and relatable characters that are flawed, complex, and totally endearing. If you're anything like me, you've been longing for a reboot since the last episode aired and have binge-watched the entire series too many times to count.

So you can imagine my complete and utter joy when I heard about a Parks and Rec reunion happening at the Paley Center For Media on Thursday, March 21st. Keep scrolling to find out all the highlights from the momentous event. A word of caution, though: It might make you want to immediately watch through the entire series again, no matter how recently you may have finished it.

"Parks and Recreation" was one of those shows that you never wanted to end.

There were so many things about it that made it stand out from other sitcoms of its time.

Like the strong, supportive female friendship between two of its main characters.

While most shows and movies pit women against each other, Ann and Leslie's relationship showed the magic that happens when jealousy and underhandedness are replaced with love, support, and encouragement.

Oh, and FYI, this is way more accurate when it comes to female friendships. Most of us are obsessed with our lady friends and want nothing more than to constantly tell them what magical land mermaids they are.

The wonderfully diverse and unique cast also made "Parks and Rec" a true TV gem.

Each character is fully fleshed-out and seems like someone you'd love to share a beer with. ...okay, maybe not Tammy. That would probably end with needing to be bailed out of a Vietnamese prison.

It also made caring about your community and getting involved in local government cool again.

Okay, so this was probably never cool. But it did shed light on the importance of maintaining our natural resources and informing yourself about why government matters. Or, as Ron Swanson might say, why it doesn't matter.

I've watched "Parks and Rec" in its entirety probably way more times than necessary, and there are parts of the show that I'll never forget.

Like when the entire cast gets plastered on Snake Juice and Ann and Leslie fight. Can we just stop for a minute to appreciate Ron dancing in April's pillbox hat?

Truth be told, I actually feel sorry for Jerry. Maybe it's because I tend to feel like the "Jerry" in my own circle of friends more often than not, so to me it's personal.

When Ann and Chris move to Michigan.

This scene will always make me tear up. In fact, I'm tearing up right now just thinking about it. ...just give me a moment to get myself together.....

Ben Wyatt clearly just doesn't get it. That tiny horse was a legend. Also, I'll forever have "Bye, Bye, Li'l Sebastian" stuck in my head because of this episode.

Honestly, there are too many memorable moments to name.

Every minute of this show was pure gold. So when it was announced that the cast would be getting back together for PaleyFest on March 21st, diehard "Parks and Rec" fans lost their minds with excitement.

According to www.paleycenter.org, PaleyFest is "the premier television festival in the country—a must-attend entertainment event produced by The Paley Center for Media that brings you together with the talent behind your favorite TV shows."

One of such events during the fest was a Parks and Recreation reunion, which, not surprisingly, sold out almost instantly.

Oh, and it was moderated by Patton Oswalt.

Why on EARTH was I not able to score a ticket to this?! I'll live with this regret for the rest of my life!

So let's get into some highlights of this momentous event, shall we?

Let's start off with Leslie Knope herself, aka Amy Poehler. I think it's safe to say that this red pantsuit was a not-so-subtle nod to Leslie's famous collection of pantsuits. Although, this one is clearly much more hip and flattering.

Notice anything special about Rhetta's dress?

That's right. The one-and-only Donna Meagle wore a dress covered in the words "Treat Yo' Self". If that doesn't make you squeal with delight, I'm not sure why you're even reading this right now.

The gang posed for dozens of pics together.

And here they are as one big, beautiful group.

Is it just me, or do they all look like they're hiding an exciting secret? Like the fact that, perhaps, there's a reboot in the works? Do we dare to dream??!

The stars talked about what they loved about the show and their characters.

According to Schur, the saddest day on set was when Ann and Chris left because of Amy and Rashida's real-life friendship. Okay, I may or may not be crying again...

Schur also revealed that they did something called "fun runs".

The cast did “fun runs” which were takes where they could do anything. The show was shot with 2 cameras. The last 5… https://t.co/yJlqJPMbZZ
— paleycenter (@paleycenter)1553225329.0

This meant that, during the final 5 minutes of each scene, the actors were allowed to venture off-script and add something completely improvised.

Remember this infamous line from the episode where Chris Traeger gets horribly sick with the flu?

This was actually unscripted and came from one of said "fun runs". Who knew Rob Lowe was such a comedic genius?!

This hilarious moment was also not in the original script.

Schur has even said that he was slightly irritated when Pratt ad-libbed this since it was such a genius joke that he wished he'd written it into the original episode.

A lot of characters have some similarities with the actors who portrayed them.

Mike Schur says Nick Offerman salvaged the doors from the @parksandrecnbc set and made everyone canoe paddles with… https://t.co/46pOhQDoKG
— paleycenter (@paleycenter)1553226718.0

Ron Swanson, for example, became a woodworker after the writers from the show discovered that Nick Offerman was himself a skilled woodworker.

Oh, and Rhetta is just as passionate about maintaining her friendships and "me" time as Donna was, which fills my cold, black heart with joy.

Chris Pratt appreciated the way "Parks and Rec" was filmed.

.@prattprattpratt says his relationship with the FBI is LEGIT after #parksandrec after his days as Bert Macklin! Pr… https://t.co/GCgviQmCIi
— paleycenter (@paleycenter)1553227467.0

He tried to bring something new to the table with each take, which he says allowed him to hone his craft and work on his comedic skills.

If someone would have said that pudgy, loveable Andy Dwyer would become a hard-body action star just a few years later, I'd have laughed in their face. I guess the joke's on me!

Attention "Parks and Rec" fans: LEAVE THIS MAN ALONE. For one thing, Jim O'Heir is not, in reality, Jerry Gergich. And also, hasn't he suffered enough?!

About phrases like #TreatYoSelf and #GalentinesDay that have become part of the vernacular, Rob Lowe was so happy w… https://t.co/xe1bhG4DF2
— paleycenter (@paleycenter)1553224916.0

In fact, on the day the show wrapped, Mike Schur gave Lowe some notes that he took after first meeting with him about the character that said " “He says ‘literally’ all the time".

At one point, Patton Oswald suggested the idea of a "Parks and Rec" movie.

.@pattonoswalt suggests making a #ParksAndRec movie. Mile Schur says “I think everyone on this stage would want to… https://t.co/RcGb1lg9x0
— paleycenter (@paleycenter)1553226830.0

Patton, you're a true hero. A P & R movie would be just the thing to satisfy my insatiable hunger for more adventures from Leslie and the gang.

Because, seriously, can you name a better show?