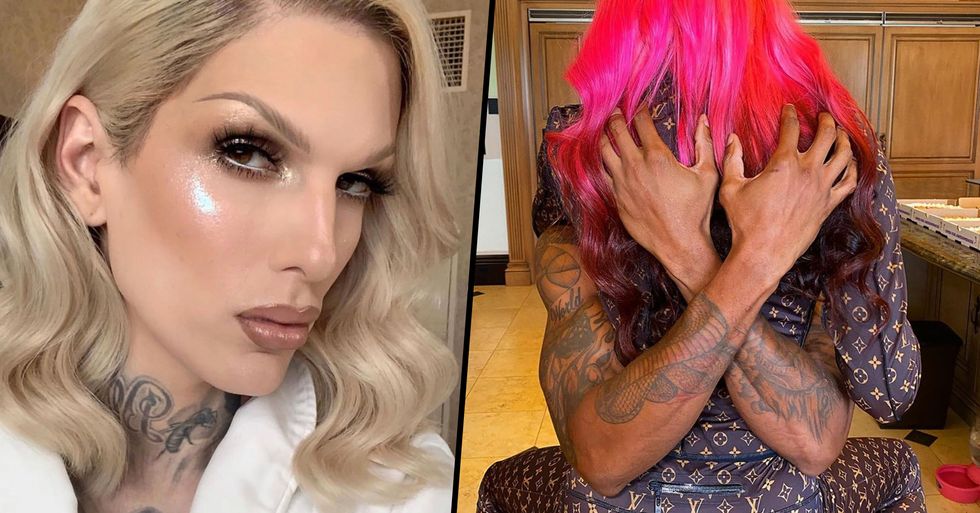 Breaking news... Jeffree Star has a new man in his life!

He's kept his new basketball player boyfriend's identity a secret but it didn't take the internet long to expose who he is...

Where do we even begin?!

The thirty-four-year-old beauty mogul is known for his expensive lifestyle and crude personality...

But believe it or not, Jeffree comes from rather humble beginnings.

Born as Jeffrey Lynn Steininger Jr, the YouTuber was raised in a relatively normal California home.

His father sadly committed suicide when Jeffree was just 6-years-old, and he was solely raised by his mom.

He moved to Los Angeles after graduating from high school...

And the young Jeffree became a prominent figure on the social media platform MySpace, which propelled his career in both the beauty and music industry.

Jeffree had a brief music career, to say the least.

He released his first and only studio album Beauty Killer in 2009, which peaked at number 7 on the US Billboard Top Electronic Albums chart. But it wasn't meant to be as after a couple of promotional world tours, his name in the industry quickly disappeared.

But after a quiet few years, the launch of Jeffree Star Cosmetics in 2014 rocketed Jeffree to fame.

Alongside his very popular (and often controversial) YouTube channel that boasts 17.2 million subscribers, the beauty mogul has made quite the name for himself in the beauty community.

Jeffree has landed himself as one of the most savage faces in makeup...

And no matter how big the brand... if he isn't impressed, he isn't afraid to call them out.

Who could forget the time he dragged Kylie Jenner's cosmetic line through the mud?

He felt that her $400 makeup brush collection wasn't worth the money and after making a brutal video explaining why, Kylie was quick to take him off the PR list. Ouch.

He also had a highly publicized argument with tattoo artist Kat Von D that caused a lot of drama.

The former best friends fell out, bad. They each posted sour videos on their YouTube channels aimed directly at each other and rumors were flying all over the place about their beauty brands.

Jeffree never seems to be far away from drama within the beauty community...

But he has also had his fair share of controversies over the years, with re-surfaced footage of the YouTuber using racial slurs causing a lot of offense. This even led to beauty giant Morphe dropping Jeffree Star Cosmetics.

Jeffree recently acknowledged these accusations and made a public apology...

And regardless of the people he offended, he continues to be as popular as ever.

Fans just seem to love every aspect of his extravagant life...

And that includes his personal life.

Jeffree was in a long time relationship with Nathan Schwandt since 2015...

And Nate became a huge part of not only Jeffree's personal life but also his online life that was displayed for his fans.

And they even shared a Calabasas mansion together and several Pomeranian dogs... not to mention the threesomes that Jeffree would regularly speak about on his Instagram stories!

But it clearly wasn't meant to be...

As earlier this year, Jeffree announced that he and Nate had separated after 5 years together.

Jeffree seemed to be devastated...

And as were his fans. But, it didn't take the YouTuber long to move on!

It has been rumored for a few months that Jeffree has a new man in his life...

And when he uploaded this steamy Instagram post earlier this week, it confirmed fan's suspicions. He simply captioned it, "Thankful for all the blessings God has brought into my life this year."

But thanks to the internet detectives out there, people seem to be pretty sure who this mystery man is... and he's no stranger to the spotlight!

People are convinced that Jeffree's boyfriend is a famous basketball player.

Andre Marhold is the suspect and fans have made the link from the pro-basketball player's arm tattoos. The tattoos on the mystery arms are identical to those on Andre's. Coincidence?

The internet worked hard together to solve this mystery...

And their hard work definitely paid off!

And when Jeffree tweeted this...

It most certainly proved our suspicions!

It also didn't take long for the internet to do some digging on Jeffree's new man.

It turns out that his ex-girlfriend, who he shares a baby with, is heartbroken by his new (and much more glamorous) relationship.

But some people feel that Jeffree and Andre's relationship is simply a publicity stunt...

And that Jeffree is "using" him to combat the racism accusations that are constantly getting thrown his way.

Yet it's important to remember that a person's private life needs to be respected...

And Andre's decision to form a relationship with Jeffree is completely his call.

We hope that Jeffree and Andre find happiness with one another!

For more drama in the beauty community, keep on scrolling to read about the controversial Shane Dawson and how Jaden Smith called him out for "sexualizing" his little sister...

37 Statement Clothing Items That Are Under $50