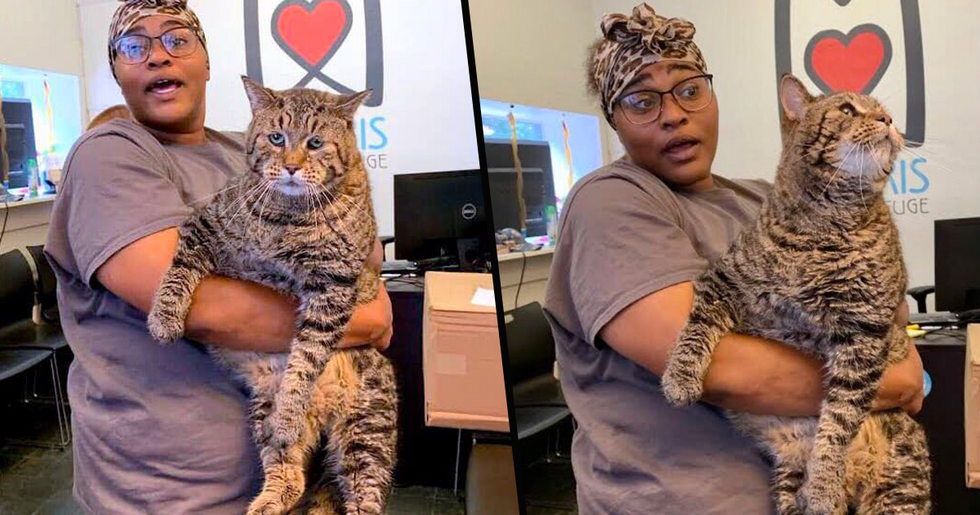 Cats are some of the nation's favorite pets and it's not hard to see why... they're adorable.

But one feline has skyrocketed to viral fame this week for being the "world's chonkiest cat," and he's looking for his forever home...

Keep scrolling for the adorable photos. This adorable cat is well and truly pulling on our heartstrings.

It turns out that there aren't many who don't as these furry felines are some of the nation’s favorite pets.

But despite the many different types of cat...

They are all equally as precious.

They never fail to make for some of the best content online.

Some good old cat content is a sure-fire way to cheer us up.

And they're all equally as adorable!

But one cat has gone viral online recently after claiming an unlikely (and unofficial) title.

Morris Animal Refuge is home to a feline a-lister.

According to their Facebook page, they are "America's First Animal Shelter," having been founded in 1874.

But when they shared a picture of one of their rescued cats...

The internet well and truly imploded.

Because the cat in question is rather large, to say the least.

BeeJay, also known as Mr. B is a 2-year-old male Domestic Shorthair, and has recently become something of a celebrity.

He is described as "a BIG cat with a big heart!"

As well as "a chonk of a chonk." You can certainly see why...

Mr. B weighs in at whopping twenty-six pounds.

And is looking for his forever home. Morris Animal Refuge first tweeted about Mr. B, writing: "OMG, big boi Mr. B is a CHONK. He’s a chonk of a chonk. He redefines the term. Can you guess how much he weighs? More importantly, can you give him a home? Adopt this jumbo-sized package of fluff & love[...] to help this sad-eyed guy find happiness!"

He quickly went viral for his appearance.

And the shelter received a staggering three-thousand applications from people looking to adopt this chunky feline.

Mr. B sadly has some underlying health and behavioral issues.

So the shelter were on the lookout for someone experienced with cats to look after him.

There was a huge outpour of love for him...

The shelter was inundated with messages about him.

Mr. B is currently in a foster home.

"Sweet chunky Mr. B’s amazed by the huge outpawing of interest in him - over 3000 applications!"

It looks like he may be there to stay. "He has a foster (maybe forever) home now - but so many other great adoptable cats need you."

Mr. B is utterly adorable!

For more on our feline friends, keep scrolling to read all about the relationship between a cat and his space heater...