30 of the World's Most OUTRAGEOUSLY Perplexing Snack Foods | 22 Words 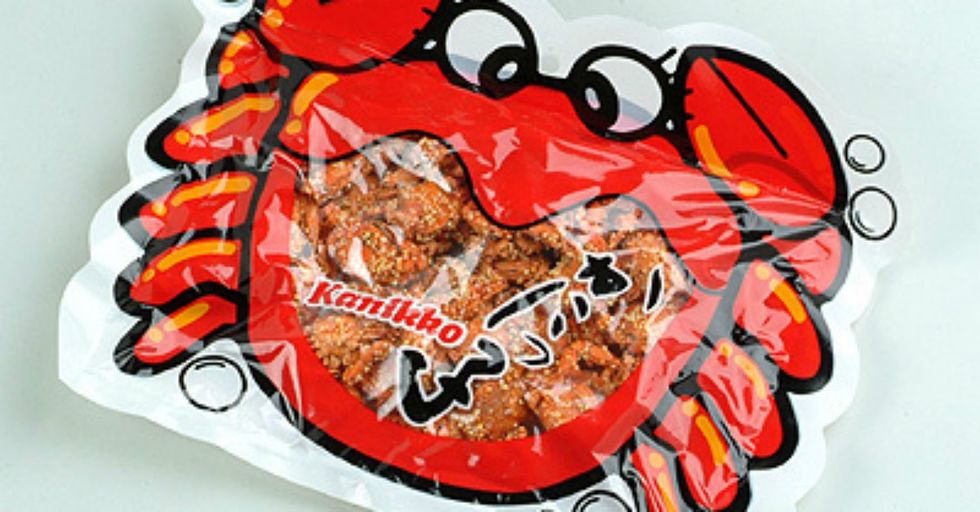 30 of the World's Most OUTRAGEOUSLY Perplexing Snack Foods

Over the years, I've become increasingly more rooted in my belief that we humans are complete oddballs.

What's my latest justification for this theory? Our snack food offerings. Surf the Internet in search of out-of-the-box snack food varieties and you too will learn that humanity has stocked this big wide world with no shortage of seriously strange snacks.

Whether you're interested in pounding fistfuls of seasoned insects or quenching your thirst with a bacon-flavored soda, I now believe there is indeed a snack fit for every craving.

Keep scrolling through to uncover all of the incredibly inventive and outrageously bizarre snack foods different folks regularly enjoy all across the globe.

Many folks have enjoyed snacking on bugs for years. Now, insect snacks like these Crick-ettes are creeping and crawling their way even further into the mainstream spotlight. Available in zesty flavors like sour cream & onion, bacon & cheddar, and salt & vinegar, Crick-ettes might just be the beginning of a snack time revolution.

Do you suffer from endless fish and chips cravings? Fear not! Hop on the next plane to Australia, and end each and every one of your subsequent fish and chips feasts with a hearty scoop of this fish & chips gelato. Go ahead. You're worth it.

via: Mackie's of Scotland

Have you been searching for ways to better incorporate Haggis into your life? We've got you covered. Mackie's of Scotland offers Haggis & Cracked Black Pepper potato chips. Mmm, mmm, Haggis.

Russians really know how to snack it up! These dried yellow croaker fish snacks let you enjoy the tastes of the sea anywhere, anytime.

Are you craving the hearty flavors of a Sunday roast lamb, but it's only Tuesday? Crunch into this New Zealand favorite — Roast Lamb & Mint-Flavored Eta Kettles.

They're larva, they're real, and they're perfectly seasoned. Larvets come flavored either in BBQ, cheddar cheese, or Mexican spice seasonings, because of course they do!

Imagine reaching for a delicious Kit Kat but instead crunching down and flooding your mouth with BAM! Wasabi. In Japan, that's not just a far reaching hypothetical, my friends — it's a completely plausible reality. That's one way to clear out your sinuses.

Octopus-Flavored Tako Chips are a salty South Korean treat. I feel like if you love fried calamari, these will taste deliciously familiar.

Salmiakki, a salty Nordic licorice, boasts an acquired taste that, honestly, most folks never develop. But, I mean, go on. Just try it.

Next time you're in Israel, grab a bag of these falafel-flavored Bissli. Then, head to your nearest falafel stand and also get the real thing because there is no such thing as too much falafel.

via: A Taste of Britain

Why settle for a boring shrimp cocktail when you can instead indulge in Prawn Cocktail-Flavored potato chips? Why? Why? Because we can, damnit. Because we can.

via: The Daily Meal

Picture it. You're strolling along a sweltering beachfront, sipping a cold, refreshing... eel soda?? Unagi Nobori, or Surging Eel soda is one of many unusual Japanese beverage varieties. Filled with all sorts of vitamins and extracts found in eel themselves, it's fizzy! It's yellow! It's... inventive? Yeah, we'll go with inventive.

Mid-Cheeto crunch, have you ever found yourself thinking, "Man, I wish my Cheetos tasted like Mountain Dew?" Well apparently folks in Japan did too, and now they produce Mountain Dew-flavored Cheetos. Japan. The country where I'm starting to honestly believe that literally any flavor combination you've ever lightly contemplated is already available in bulk.

Bacon. Most would argue no brunch is complete without it. For the bacon-obsessed, a simple side of the smokey delicacy alone often can't satiate that ever-present craving. Thankfully, there are now all sorts of different snacking vessels touting that deliciously addictive bacon flavor, including bacon soda. What's next? Lemon Pepper Tang?

Why settle for boring orange-flavored Tang when your taste buds could tingle with the spicy, sour flavors of lemon pepper Tang? Arabian marketplaces sell this out-of-the-box Tang flavor. So, what are you waiting for? Catch that next flight to flavor town!

Alright, now these treats actually seem completely intriguing to me. Along with your classic vanilla and chocolate flavored ice creams, Japanese markets also sell more exotic Häagen-Dazs flavors like tomato and carrot. Yes, I am that weirdo who would choose steamed veggies over chocolate any day, any time. No shame.

Why scarf down a full pancake breakfast when you could slurp up a pancake batter-flavored milkshake? This Japanese creation offers consumers all the familiar flavors attributed to guzzling down raw buttermilk pancake batter without the added risk of Salmonella poisoning. YUM!

Japan seriously produces a plethora of inventive snack offerings. These spaghetti popsicles are comprised of Neapolitan flavored ice cream flecked with tomato jelly. These don't necessarily seem like the tastiest treats, but who are we to judge?

When you're craving the hearty snap of sausage, the refreshing cool of beer, and the crisp crunch of a tortilla chip look no further than sausage and beer flavored Doritos! Earth — where you really can have it all.

Apparently our great wide world suffers not from too few potato chip varieties. In India, folks indulge in Mint Mischief Lays potato chips. These delicious delicacies sport a perfectly balanced medley of mint, lime, and jalapeño flavorings. I mean, why not?

You know what your quesadillas have been missing recently? Chocolate! Thankfully, Taco Bell in the UK offers Chocadillas — warm, melty chocolate nestled in between two grilled soft flour tortillas.

In Asia, local Dunkin Donuts offer flavors ranging from Kimchi-filled to Dried Pork & Seaweed donuts. If biting into one of those doesn't jolt you awake in the morning, I honestly don't know what will.

Ready to kick up your Frappuccino game? Head to Japan, where you can try their unique coffee jelly flavored Frap!

Various Asian markets take Pringles chips to a new extreme, offering seaweed, grilled shrimp, and even soft-shell crab-flavored varieties. Give them a try y'all because as always, once you pop, the fun will certainly never, ever stop.

via: Our Tasty Travels

Head to South Korea to snack on some Beondegi, or seasoned silkworms. Sold everywhere from grocery stores to markets, these delicious delicacies are boiled and then seasoned for maximum flavor. Go ahead, let that mouth water.

In case your afternoon was missing asparagus-shaped snacks, fear not! The Japanese offer Asparagus Biscuits — biscuits that merely resemble asparagus in shape but are in no way comprised of asparagus or asparagus flavoring. Tricky tricky!