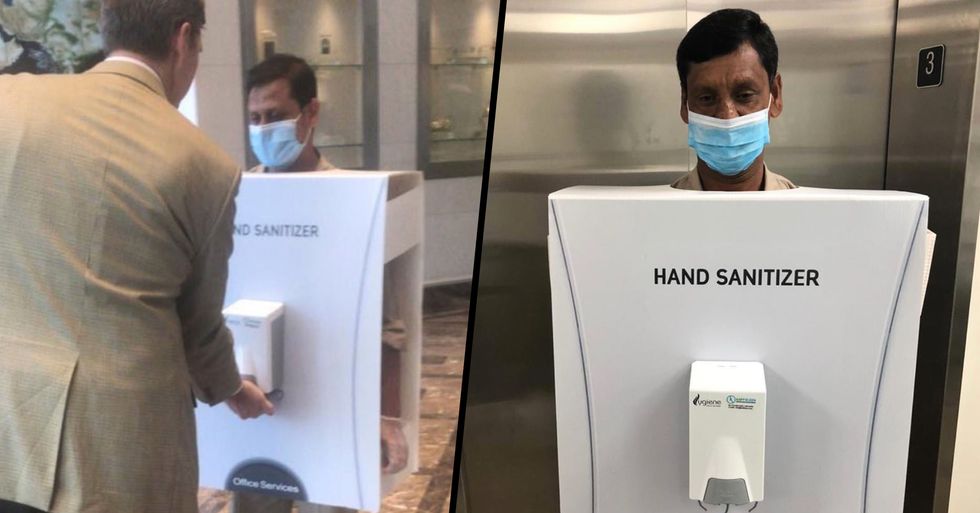 As global panic escalates, some disturbing pictures have surfaced of "the world's most valuable company" using a migrant worker as a human hand sanitizer...

People are disgusted. Keep scrolling to take a look.

It has been confirmed by Worldometer that 4,386 people have now died globally, with the majority being in mainland China. A further 122,000 have been found to carry the virus and be infected.

And now, it seems that there is a reason for people to really start panicking.

The BBC has reported yesterday that the coronavirus has been officially confirmed by the WHO as a pandemic.

As global panic escalates, one company has landed itself in serious hot water...

Disturbing pictures have gone viral of a migrant worker forced to dress as a hand sanitizer.

The pictures were taken in the lobby of oil giant, Saudi Aramco's, headquarters.

They've caused widespread outrage, and rightly so. Keep scrolling to take a look at the snaps and what people have been saying about them...

And they depicted a man wearing a face mask and a box with the words "hand sanitizer" written on it, as well as an actual soap dispenser.

The pictures were quickly slammed for being racist and exploitative.

Many pointed out this:

Saudi Arabia has hit the headlines numerous times for the mistreat of its millions of migrant workers.

Others hailed the move all-out "inhumane."

"wtf?? so there’s not even a single person who’s educated enough to just take that sanitizer and hang it on the wall instead and stop them from taking pictures? whoever came up with this stupid idea should be punished. I’m so confused??"
This is awful...