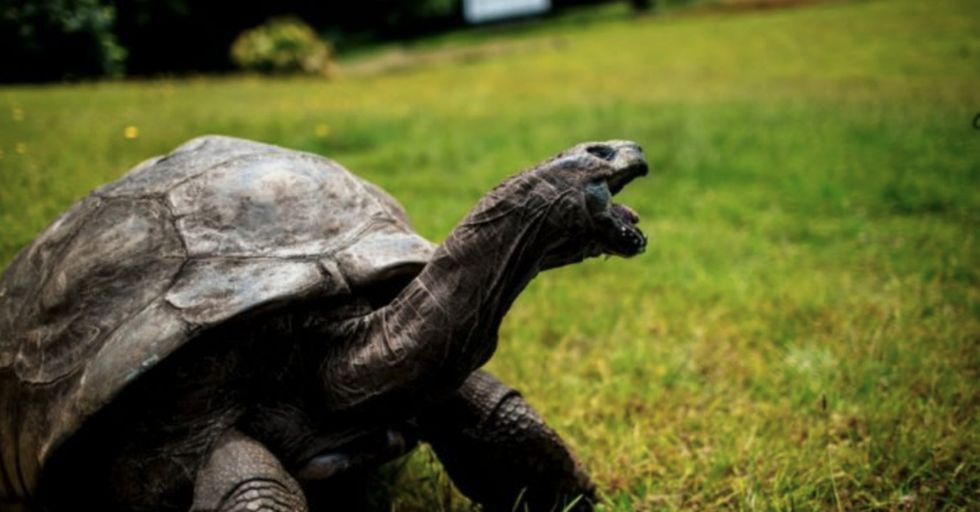 Have you ever felt like you're too old to find your soulmate? Well, this inspiring story might change your mind. A tortoise in St. Helena has found the love of his life, and he just so happens to be 185 years old.

But, this story also has a twist. Keep reading to hear about the surprising discovery that a vet recently made about the two lovebirds (or, rather, love turtles).

He's a giant tortoise who resides on the British Overseas Territory island of St. Helena located in the South Atlantic Ocean. He also happens to be the world's oldest living land creature.

Jonathan was hatched in Seychelles in 1832, making him 185 years old.

He was first brought to the island of St. Helena in 1882, at roughly 50 years old. Governor Sir Spencer Davis gave him the name "Jonathan" in the 1930s.

He lives on the grounds of Plantation House, which belongs to the government of St. Helena and is the official residence of the Governor.

When Jonathan reached his late 80s, he began acting strangely. In what locals described as being like an "unruly teenager", he would knock over benches and ruin men's croquet games by flattening their hoops.

His caretakers figured that he was bored and lonely, and knew that something had to be done to quell his behavior.

In 1991, the French consul gifted the governor of St Helena with a mate for Jonathan named Frederica. The two became instantly smitten.

Recently, Frederica developed a lesion on her shell.

The lesion began to affect her health and required treatment. Veterinarians were forced to step in, and although the two tortoises had developed an extremely close bond over the past 26 years, they had to be separated.

The lesion required some rather intensive repairs to Frederica's shell.

The vets were able to determine that she had a slight deformity on her shell resulting from a past injury. But that wasn't the only thing they discovered...

A slightly more surprising determination was made.

Frederica was not, in fact, a female, but a male. Jonathan had been living happily with his mate for nearly three decades, and while their keepers had been somewhat surprised by the lack of tortoise babies, it all became clear when Frederica was discovered to be Frederick all this time.

It turns out that the genders of tortoises are not as easily distinguishable as you might think.

Male and female tortoises do not have identifiable differences. Gender is told by various subtle clues that can easily be misidentified, such as a stomach shape or small notches in the shell.

The timeliness of the discovery was not lost on residents of St. Helena, who are currently in a fight for marriage equality.

While a bill was introduced in 2016 to allow same-sex marriage, it was withdrawn due to public outcry. According to The Times, the legislative council has recently been conducting massive consultations across the island "to canvass opinion on whether the bill should be presented to the council before a court case that is set to challenge the current law on discrimination grounds."

Jonathan and Frederick, however, seem pretty oblivious to the controversy surrounding their way of life on the island they call home.

While he might seem to be rather spry for 185, Jonathan is beginning to show his age. He's nearly blind due to cataracts and his sense of smell is completely gone. His love for Frederick, however, appears as strong as it was when they were first introduced.

Veterinarians say that the two behave exactly like any other pair of mates.

According to Catherine Man, the island vet, Jonathan and "Frederick" (renamed after the discovery) do everything together – "eating, sleeping and mating at set times." These two prove that you're never too old to find the person (or tortoise) you're meant to be with.