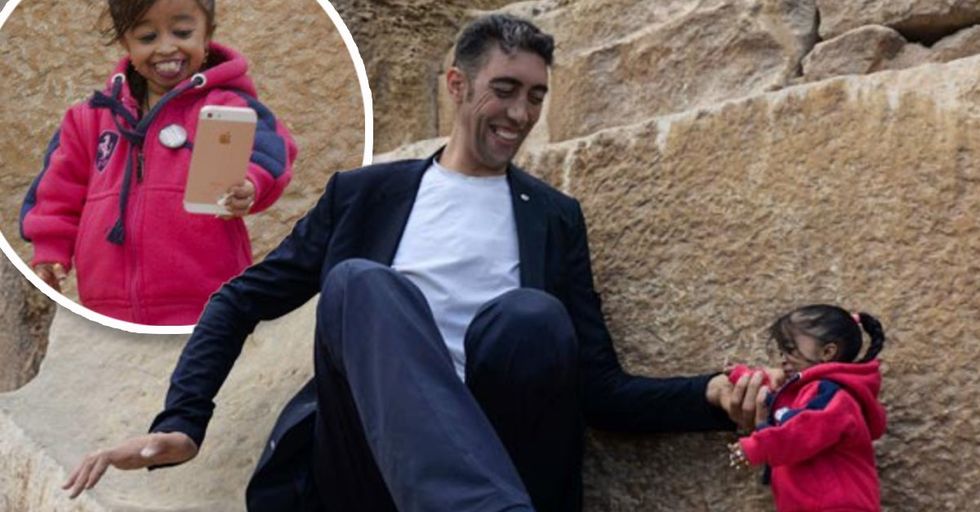 Occasionally, two extraordinary people get together and make something really cool happen!

That's what went down when the world's tallest man, Sultan Kosen, met up with the world's shortest woman, Jyoti Amge, at the Giza pyramids in Egypt a few days ago.

They may sound like an odd couple, but the pair took part in this extra special photo shoot for a good cause!

Sultan Kosen and Jyoti Amge are both distinctive holders of Guinness World Records. Kosen, measuring in at 8'3", is currently the world's tallest man, and Amge, at 2'1", is the world's shortest woman.

Sultan Kosen is from Turkey, he's 35 years old, and he is one of only 10 people in history to measure over 8 feet tall.

It's been more than two decades since another person has topped 8 feet, according to Guinness World Records. Kosen's record-breaking height is caused by a condition called "pituitary gigantism." Because of his size, he wasn't able to finish school. Instead, he became a farmer to help support his family. Kosen got married to the love of his life, Merve Dibo, in 2013!

Jyoti Amge is from India, 25 years old, and is shorter than the average two-year-old child.

Amge is 6.2 cm shorter than the former world's shortest woman. She has a form of dwarfism called achondroplasia and has reached her tallest height — she won't grow anymore. Amge works as an actress and television personality. You may recognize her from her role in American Horror Story. It's safe to say Amge's stature is not stopping her from pursuing her dreams!

While Kosen and Amge are, obviously, quite different, they have a lot of similarities.

Both hold records for their height, both have become celebrities in their own right, and both are eager to make a difference in the world.

That's why they got together for this memorable photo shoot at the pyramids.

The Egyptian Tourism Promotion Board invited the Guinness Record holders to the pyramids in order to bring some attention to this area and boost tourism where it had been waning. This extraordinary meeting was the first time Kosen and Amge have been in Egypt.

The pictures that were taken are truly amazing!

And this isn't the only stop on their trip. The pair is expected to visit other famous sites around Egypt as well, in order to promote tourism in an area that has faced many setbacks.

According to Reuters, 14.7 million tourists visited Egypt in 2010, but that number decreased to 9.8 million by 2011. And tourism to the country has been dropping steadily ever since.

They hope that events like this meeting between Kosen and Amge will help position Egypt as a destination for tourists yet again. They aren't the first celebs to visit the area to help the cause — Kourtney Kardashian, Will Smith, and soccer player Lionel Messi have all participated.

But this celebrity event might be the most visually stunning! For such a short person, Jyoti Amge seems like a super fierce woman.

We're just thrilled that these two seem happy and that they're able and willing to use their extraordinary gifts to help others! Plus, this campaign seems to be doing its job because the pyramids look gorgeous and we want to book a trip ASAP.