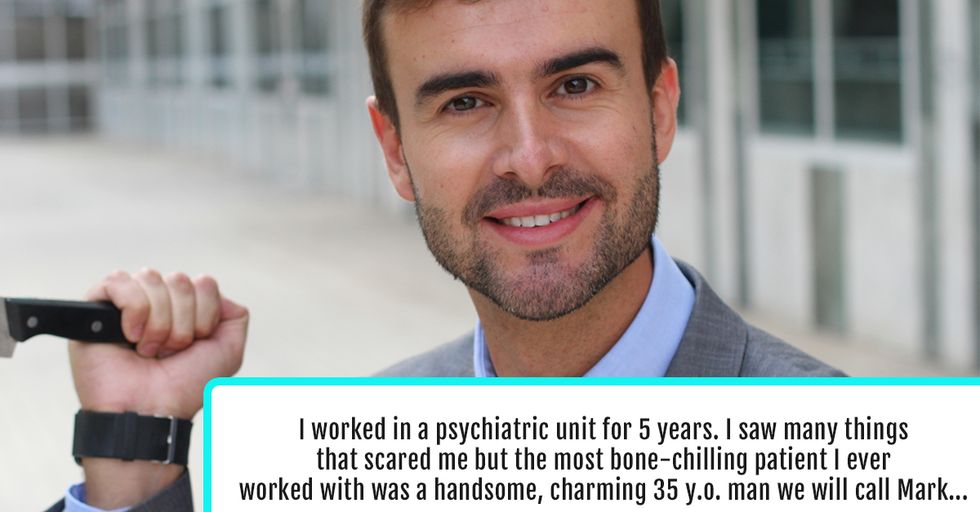 Sociopath. It's a word that's tossed around a lot – usually as a synonym for "psychopath," but the two are not the same thing (although they are closely intertwined).

Both types of people have Anti-social Personality Disorder, which means they have little to no concern for others, and engage in dangerous behaviors including manipulation and exploitation.

The difference between a psychopath and a sociopath, however, is conscience.

The psychopath has none.

Here are 10 therapists on their frightening interactions with sociopaths.

Wow, this is messed up. The most messed up thing about it being that this person manipulated his friends into committing a horrendous crime with him using a false premise.
Even worse, they're in jail, while he's out and about, presumably free to continue doing this type of thing. Scary.

This is genuinely frightening, especially considering the way he manipulated everyone around him. He always seemed nice to everyone that was in a position of power, or was verbal.
Even worse, he made his victim out to be an abuser, and would have continued doing so had he not been caught. And the nurse's words about pulling in a victim to torment? Chilling.

There are MULTIPLE horrific things here from both stories. The first one about killing goats is already horrible, but then when you think about the fact that he intentionally killed the goats because he knew the families depended them on survival it gets even worse.
This guy was literally trying to starve people to death, which is the same thing he did with the kids. And let's not even mention the second guy and the pen.

The most chilling thing about this story is the intention behind the sociopath's actions. He made sure he declared he was suicidal on the day only this nurse could attend to him, then he made sure to pull out all the details he could about this person.
Then he used those details to traumatize her in the most horrific way, all the while delivering a very pointed warning. If we were her, we would have honestly transferred then and there.

There are a few key, horrifying words in this story, but the one we're fixated on is emptiness. This guy, as the therapist describes him, was "empty."
More worrying was his casual admittance to domestic violence. We can't help but wonder what happened to this guy, as it seems like he still might be out there, practicing his particular brand of torment.

There's a word for these two people – serial killers. That's what they are and the scariest thing is that they don't have to do any actual killing themselves.
Rather, they manipulate vulnerable people into a suicidal state and then feign shock and ignorance when their victims die.

This one turned our stomachs and devastated us in ways we didn't think we could be devastated. Puppy? Broom?
We can't help but wonder how the parents must feel, knowing that they're raising this little person that's probably gonna grow into a big person that's monstrous.

9. Lizard in a human suit

We're not sure how to feel about this one. We're no experts, but this girl sounds like a psychopath. She literally has no concept of what empathy is.

Back in the day, people would describe this girl as lacking a soul. And she affects a cutesy voice. We're scared for anyone who's around her.

This story is frightening on many levels, the first being that this kid was able to wait eight months to show his true colors – a frightening level of self control, considering he was only six.
Then there's the lying and the murdering of kittens and the icing out of the grandparents. But this kid is a success story. That's a very frightening thought.