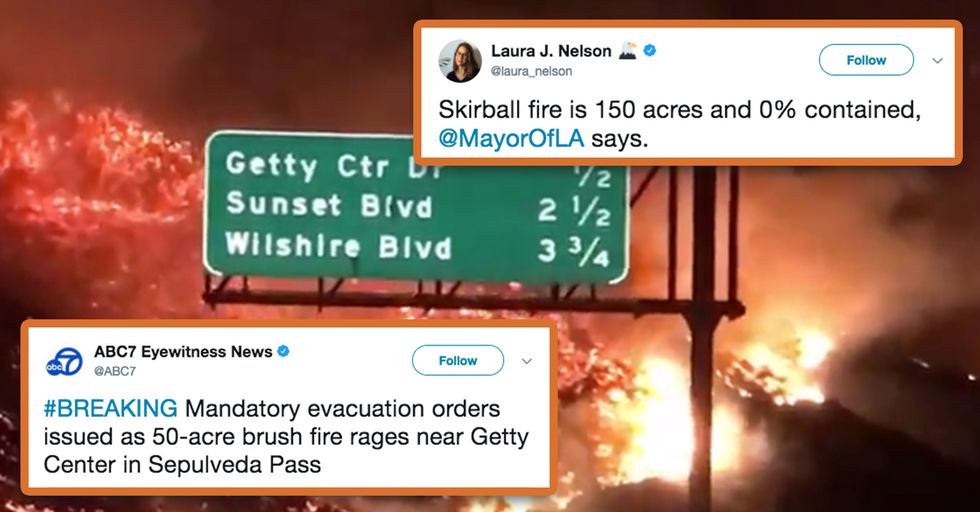 In case you don't live in California and/or haven't been following the news, Los Angeles is on fire right now. Actually, literally, as in, not figuratively. There are four forest fires raging in the hills in and around Los Angeles.

Thousands upon thousands of residents have been evacuated. Hundreds of structures have been destroyed, including families' homes. And the footage people are posting of their views of the fires is jaw-dropping. You have to see it.

There are four wildfires raging in and around the Los Angeles area right now.

The biggest is the Thomas fire in Ventura, followed by the Creek fire, the Rye fire, and the newest one, the Skirball fire, which has shut down one of L.A.'s major freeways and threatened the Getty Center Museum.

The Thomas fire has been growing quickly in Ventura, forcing tens of thousands of people to evacuate their homes.

More than a quarter of the city of Ventura, which is home to more than 100,000, were told to evacuate. There's no way of knowing that this moment how many homes have been destroyed.

Firefighters have been working around the clock to contain the fires as much as possible, but the loss of land and property is already devastating.

'These are the days that break your heart," said L.A. Mayor Eric Garcetti in a news conference. "These are also the days that show the resilience of our city."

In this photo, a man watches while the Creek fire burns behind a piece of property in the Shadow Hills neighborhood of Los Angeles.

The photos are beyond intense. But possibly even more shocking and jaw-dropping is the footage that many L.A. residents have taken with their phones as they literally drive by burning hills...

The city of Los Angeles literally looks like something out of Lord of the Rings.

At least one person has died as a result of the fires. many schools have been closed in Los Angeles and Ventura Counties. And winds are expected to get stronger throughout Wednesday and Thursday — gusts will reach 60 miles per hour.

Here, you can see the Skirball fire.

The flames of the Skirball fire are raging in the hills above the city of Los Angeles, threatening the Getty Center and homes around Bel-Air and Brentwood. Talk about intense.

The first began around 5 a.m. on Wednesday morning and grew rapidly.

Within hours, it had grown to 150 acres, and 200 firefighters were on the scene to fight the blaze. There was a danger of the fire jumping the freeway — as you can see, it looks like these commuters are driving right into the fire's path.

That's why the 405 freeway was closed in both directions on Wednesday morning.

In addition to the homes and the other structures that were at risk, this fire is destroying the habitat of much of the city's wildlife population. As of 10:21 a.m. PST, the Skirball fire was still 0 percent contained.

If you're in the area affected by the fire, please be safe.

Listen to the authorities. If you're told to evacuate, do it. The Los Angeles Times is providing timely updates of there's any news pertaining to the fires.