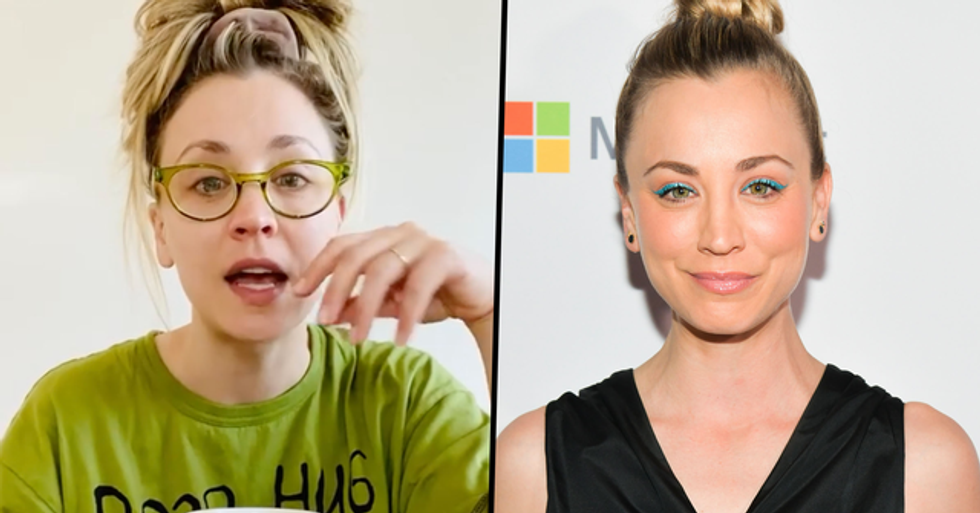 22 Words Staff
The Big Bang Theory's Kaley Cuoco has some pretty strange things in her past...

Actress Kaley Cuoco is best known for her role as Penny in The Big Bang Theory.

But behind the scenes, it seems Kaley Cuoco is a rather shady individual...

Cuoco is no stranger to controversy.

But when you look at these factors all together, it doesn't paint a pretty picture.

From her love life...

To her professional life...

There's a lot we don't talk about with Cuoco.

Perhaps because she's got so many fans?

People seem to love her and ignore the bad.

But that's not ok!

One more example of how gracious and big-hearted #kaleycuoco is. Thank you, Kaley. There’s no one I wanted more tha… https://t.co/LAwkyEhW8M
— Chris Bohjalian (@Chris Bohjalian)1602431282.0

Harley Quinn is way funnier then I expected, but I love it all the more for that reason. Kaley Cuoco is fantastic a… https://t.co/stRAoRtRV9
— Taylor King (@Taylor King)1599898903.0

So, let's start from the top.

But when things went south, Cuoco had a rather strange response.

She deleted all traces of him - literally.

The day she announced her divorce, she removed all traces of Sweeting from her socials.

Cuoco replaced all these images.

With none other than her brand new boo, Karl Cook.

Especially when you consider that Sweeting now doesn't exist online.

Now, apparently, the divorce was due to Sweeting's struggles with addiction.

Which Cuoco claimed to be supportive of.

But some sources claim that was not the case.

One told In Touch that it was Cuoco's partying that caused a problem.

"Kaley would go out with her friends, without her wedding ring, and get wasted."

"She'd drink two bottles of wine by herself."

Many also pointed out something else.

There was just 6 months between the 2 public relationships.

Which has led some to speculate...

That perhaps there wasn't such a gap at all.

In fact, could there have been an overlap?

And to make things even odder?

Clearly not taking her past lessons into consideration, Cuoco rushed into marriage for a second time.

After just a year of dating, Cuoco and Cook became engaged.

They tied the knot a year later.

Cuoco certainly doesn't hang around when it comes to relationships!

And another thing people disagree with?

How publicly Cuoco conducts her relationships.

That some consider these moves to be publicity stunts.

In between her marriages, Cuoco was almost never out of the press.

This included a very brief engagement to Josh "Lazie" Resnik.

Then a two-week fling with Henry Cavill.

The pairing was so bizarre it led to some speculation.

As the two had the same publicist at the time, some believe it was all set up to grab some headlines.

And yet another weird thing about Cuoco's love life?

Well, it turns out she had a two-year-long secret romance with a Big Bang Theory costar.

"It was a wonderful relationship but we never spoke a word about it and never went anywhere together."

"We were so protective of ourselves and the show and didn't want anything to ruin that."

"We couldn't do anything. It wasn't as fun as we wanted it to be."

"Everyone was always asking, and we deny-deny-denied."

"And I'm like, 'Why am I denying this person that I love?' It took a little bit of a toll on me and I think it did for him, too."

But there's one question.

Why on earth did she do this - and why did she reveal the relationship years later?

Aside from her romantic shadiness, Cuoco also has some professional controversies, too.

There have been many whisperings about how difficult she is to work with over the years.

At one point, Cuoco was earning a million dollars per episode of The Big Bang Theory.

And when they complained?

And to make matters worse, Cuoco has been reported to be awful to work with.

"The cast and crew are all fed up with Kaley's constant mood swings. She flips out about makeup, wardrobe, even the catering."

Alongside her diva tendencies, Cuoco has another problematic trait.

She's shared some pretty toxic views on feminism in the past.

"Things are different now, and I know a lot of the work that paved the way for women happened before I was around."

"I was never that feminist girl demanding equality, but maybe that's because I've never really faced inequality," she shockingly claimed.

She did later renege on these claims on Instagram.

"Look at me. I bleed feminism. I get equal pay to my male costars on a big show, I have my own home, I'm as independent as you could possibly be," she ranted.

Another problem of Cuoco's?

She's made some admissions that confirm she's a little bit self-obsessed.

She's admitted to being obsessed with reading comments about herself.

She's even said she'll sometimes change what she's doing to try to please the trolls!

"As much as you want to love your inner self ... I'm sorry, you also want to look good," she's said.

"Years ago, I had my nose done. And my boobs — best thing I ever did."

"Recently I had a filler in a line in my neck I've had since I was 12. I don't think you should do it for a man or anyone else, but if it makes you feel confident, that's amazing."

So ends our rundown of Cuoco's shadiest traits.

They span far and wide throughout her life.

From her love life to her work to her problematic views.

It seems there are a lot of issues with Cuoco.

And if you're not done with the Cuoco controversy...

Scroll on for the trouble she recently got into for wearing a mask...