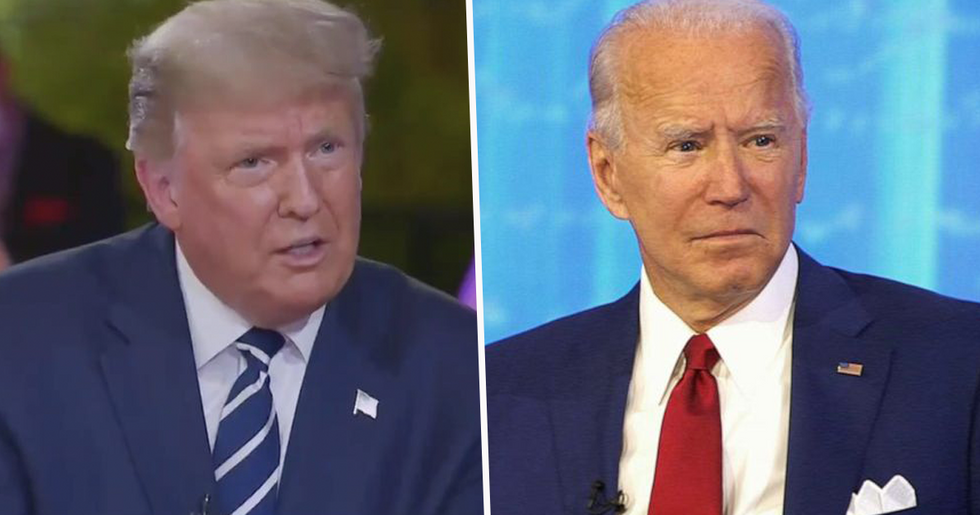 Viewers have had their chance to speak out about both Donald Trump's and Joe Biden's live Q&As.

It was an explosive one...

President Donald Trump's Miami town-hall forum this evening was far from dull, to say the least.

And as for Joe Biden's forum in Philadelphia?

There was actually a huge difference between the 2 candidate's forums... which is something that was highly expected in the run-up.

But was hastily canceled over coronavirus fears.

But it was established almost instantly that tonight's event was to be held virtually following Trump's positive COVID test.

Meanwhile, the Democratic candidate, Joe Biden, was putting together his own plan to appear in an ABC News town hall in Philadelphia...

Which is the very thing we have been watching this evening.

So, tonight, we have been treated to 2 separate town hall events...

Just on different channels from different parts of the country, with undecided voters watching in the audience. Yep, I told you things had strayed slightly from the norm.

Trump's NBC forum kicked off in Miami with Savannah Guthrie earlier this evening...

And it didn't take long for things to become very heated.

The President was firm in "denouncing white supremacy" when asked about it...

And it's clear it struck a nerve as he began viciously interrupting Guthrie when she was questioning him on these sensitive topics.

We all know that Trump came under fire in the last debate after he failed to denounce white supremacists and the Proud Boys...

So of course it was bound to be brought up tonight... and immediately, Trump was on the defense.

He was also grilled on his recent retweets containing false conspiracy theories...

Trump sneered, “So cute” at Savannah Guthrie, just in case women forgot how much contempt he holds them in. https://t.co/uDXQwFCgLj
— Sarah Reese Jones (@Sarah Reese Jones)1602813827.0

To which he defended himself by degrading Guthrie by saying she was "so cute." Not cool, Mr. President.

But it seems that Trump still has some very loyal supporters...

And some seem to be a little bit too loyal.

During the Q&A part of the forum, in which potential voters were able to directly speak to the President, a woman named Paulette was pulled up from the crowd.

She seemed to be a little bit giddy to be on TV, but it turns out that it was just because she was in the presence of such a "handsome man."

Paulette, who was dazing at Trump, said:

"Good evening, Mr. President! I have to say, you have a great smile!"

But the internet certainly didn't agree.

People were creeped out, to say the least!

Imagine having seen so few people in your life that you think Donald Trump is handsome. https://t.co/vWphYVYhXm
— Stacey Pulwer (@Stacey Pulwer)1602811161.0

And it was all very awkward and uncomfortable to watch.

Is this woman okay?

Well, that is what many people are now wondering!

Was it really necessary, though?

Many feel that Paulette's childish swooning is totally irrelevant during a Presidential Debate... especially one that is so tense, too!

All in all, his evening wasn't exactly a victory.

Some viewers have been left with no confidence in the President...

It's safe to say that things aren't looking good.

But as for Joe Biden?

Well, things aren't looking quite so bad on his side.

Biden and his moderator, George Stephanopoulos, didn't clash as much as Trump and Guthrie did.

In fact, the pair seemed to get on very well and they calmly made their way through the evening's questions.

Biden was firstly asked about how he would have handled the pandemic differently if he was in office...

To which he used his comparison to lambast Trump for his somewhat "uneven" response to the virus. "He missed enormous opportunities and kept saying things that weren’t true," he said, noting that Trump’s administration said the virus would go away by Easter or be eradicated by the summer heat.

Biden addressed the issue of LGBTQ+ rights, explaining to a supporter that he will "flat out change the law to gain more rights for people of the LGBTQ+ and transgender community."

There's no denying that Biden has gained some more supporters tonight...

And his forum was world's away from Trump's.

We all knew before the forums took place that there would be a huge difference...

But perhaps the biggest difference that has been noticed?

The contrast of each candidate's topics of discussion... in real time.

It was noticed while Trump was ranting about QAnon - one of the dangerous conspiracy theorists that he has been retweeting - Biden was talking about the importance of wearing masks and following public health measures endorsed by experts to slow the spread of the coronavirus.

At the same moment that Trump was refusing to disavow QAnon, Biden on ABC was saying that "when a president doesn't… https://t.co/LSu2RftTmy
— Aaron Rupar (@Aaron Rupar)1602810492.0

"When a president doesn’t wear a mask, or makes fun of folks like me when I was wearing a mask for a long time, then people say it mustn’t be that important."

In a race to be President of the United States only one candidate sees a nation of states; united. Amazing.
— Dan Rather (@Dan Rather)1602725755.0