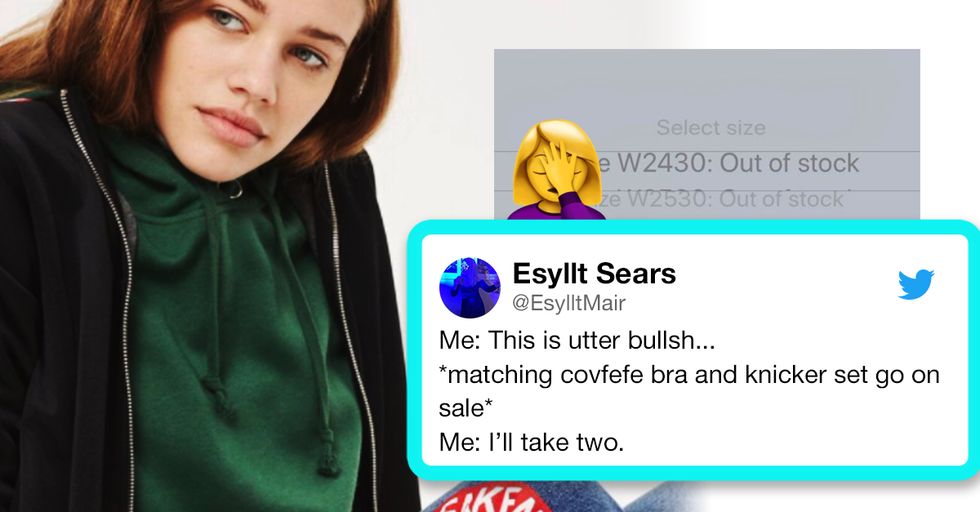 There are so many things we should not do these days, and chief among them is encourage Donald Trump and his wackadoo ways in any way, shape, or form.

One British clothing company is doing just that, though. They've released Fake News Jeans. Yes, we understand that this may be confusing — it's a real pair of jeans. They just say "Fake News" all over them. And they are selling them for $90. And people are buying them.

What has our world come to?

Donald Trump has coined a bunch of phrases during his time on the campaign trail and as president.

Chief among them, of course, is "Fake News." "Crooked Hillary" and "Make America Great Again," but apparently, those wouldn't look as adorable scrawled all over a pair of pants.

As you can see, this subtle piece of art is a pair of blue jeans with a giant strip of red down the side. All over that red, "FAKE NEWS" is written in big white block letters.

They sell for $90 and just a little itty bitty piece of your soul.

And you know what? People are buying them! They're a "trending product"! We've decided that the massive destruction that Donald Trump is causing to our democracy simply isn't bad enough to warrant not throwing one of his most favorite harmful phrases on some knickers.

Cool cool cool. Except no! Not cool at all!

The man is spending the valuable time he could use to bring aid to the people of Puerto Rico to instead hold a fake award show for his fake awards for fake Fake News organizations, which are actually real news organizations with standards and history and integrity.

This is real s***. Serious business.

Donald Trump is trying to systematically dismantle the tradition of checks and balances that keeps this country running smoothly, a major part of which is the trusted press having access to the president and the ability to report fairly on their administration. But let's put Donald Trump's assault on the free press on a pair of jeans! It'll be like, soooo trendy. Obviously, the Internet had many thoughts on the matter...

There's something eerily fascist about this whole thing.

Whether or not it's done in irony, even if you, a reasonable human being who dislikes Donald Trump, thinks it's funny and chic to wear Fake News Jeans, you're letting him win.

All he wants is power and influence.

And when he sees that "Fake News" has been embroidered a bunch of times into a pair of pants that's selling like hotcakes, Donald Trump isn't going to think, "Well golly gee, I hope they aren't making fun of me." He's going to think, "I am the king of the universe and I deserve all this fame."

So that goes back to Topshop. Why, or in the words of this Twitter user, "Whyyyyyyyy" did they think this was a good idea?

If they did it to make headlines, congrats, it worked, you're a tool of the apocalypse. Dramatic? Maybe. Maybe not.

The least they could do is support the publications that Donald Trump's "fake news" campaign has worked so hard to discredit. But then again, you'd still be walking around with "FAKE NEWS" dripping down your leg, so...

It might not be the best idea after all.