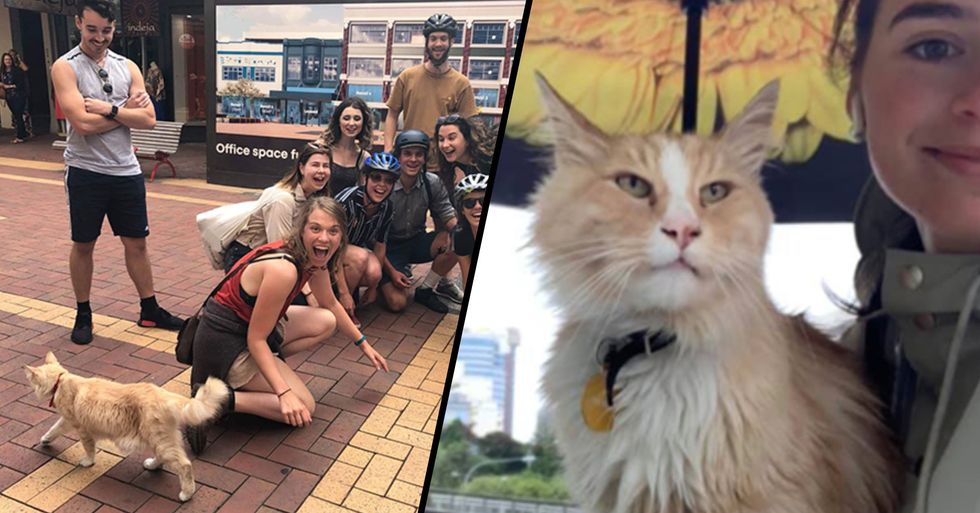 Mittens is basically the unofficial mascot of Wellington, New Zealand.

And there's a Facebook group dedicated to tracking his moves across the city.

The pictures are really something else.

Mittens seems to roam freely throughout the city.

He has a home he goes back to every night - so you can breathe a sigh of relief.

But boy, does Mittens have some adventures!

Look at this shot of him chilling at a bar.

Even venturing into his neighbors' homes for a visit.

What a blessed life he leads!

It's a great insight.

Who hasn't wanted to know what cats get up to all day?

We want to visit Wellington!

Just to get a look at this cute cat.

Imagine the thrill of spotting him in the wild?

Let alone sharing an umbrella with him!

What an appealing face.

The world is literally his oyster.

Just looking at these pictures makes us feel relaxed!

Which probably goes a long way to explain his popularity.

Checking out the view.

Not as beautiful as Mittens, though!

And there are regular contributions from adoring fans.

Look at that face!

We wanna give Mittens a big cuddle.

Showing off Wellington and Mittens - life doesn't get much better than this.

It's not just pictures of Mittens.

Souvenirs have strung up following the famous feline.

Everyone comes out for Mittens.

He knows his angles!

Mittens is certainly a photogenic cat!

A work of art.

There's no end to the support and love Mittens receives.

Mittens gets what Mittens wants.

He's got some impressive reach!

With his brother, Latte.

We love you Mittens! Want more cat content? Scroll on for the one-eyes cutie looking for their forever home.